Yes, possibly. The different approaches taken by the US and China towards managing COVID-19 has likely set the stage for a widening of the growth differential between the two countries. Immediately, the earlier reopening of the Chinese economy means China’s GDP will still show a bit of growth this year. This compares to the controversial, tentative easing of restrictions in the US, only in May. Even if the US gradually normalizes from here, its GDP for will end 2020 with a big hole, which will take three to four years to fill. If China maintains its productivity growth, it should be able to manage a long-term average GDP growth rate of around 5.8% a year. Meanwhile, long-term US GDP growth from 2022 onwards could ease to 1.5% on lower investment/lower productivity growth. Taking into account IMF projected growth rates for 2020 and 2021, China could overtake the US in Dollar terms by 2029.

Divergence between prices and fundamentals continues

The S&P 500 picked up another 4% last week, taking its total gains from 3 March to 28%. But last week (3 May-9 May) also saw another 10,795 deaths from COVID-19 in the United States. The curves for deaths and infections from the virus remain very steep. (Figure 1) 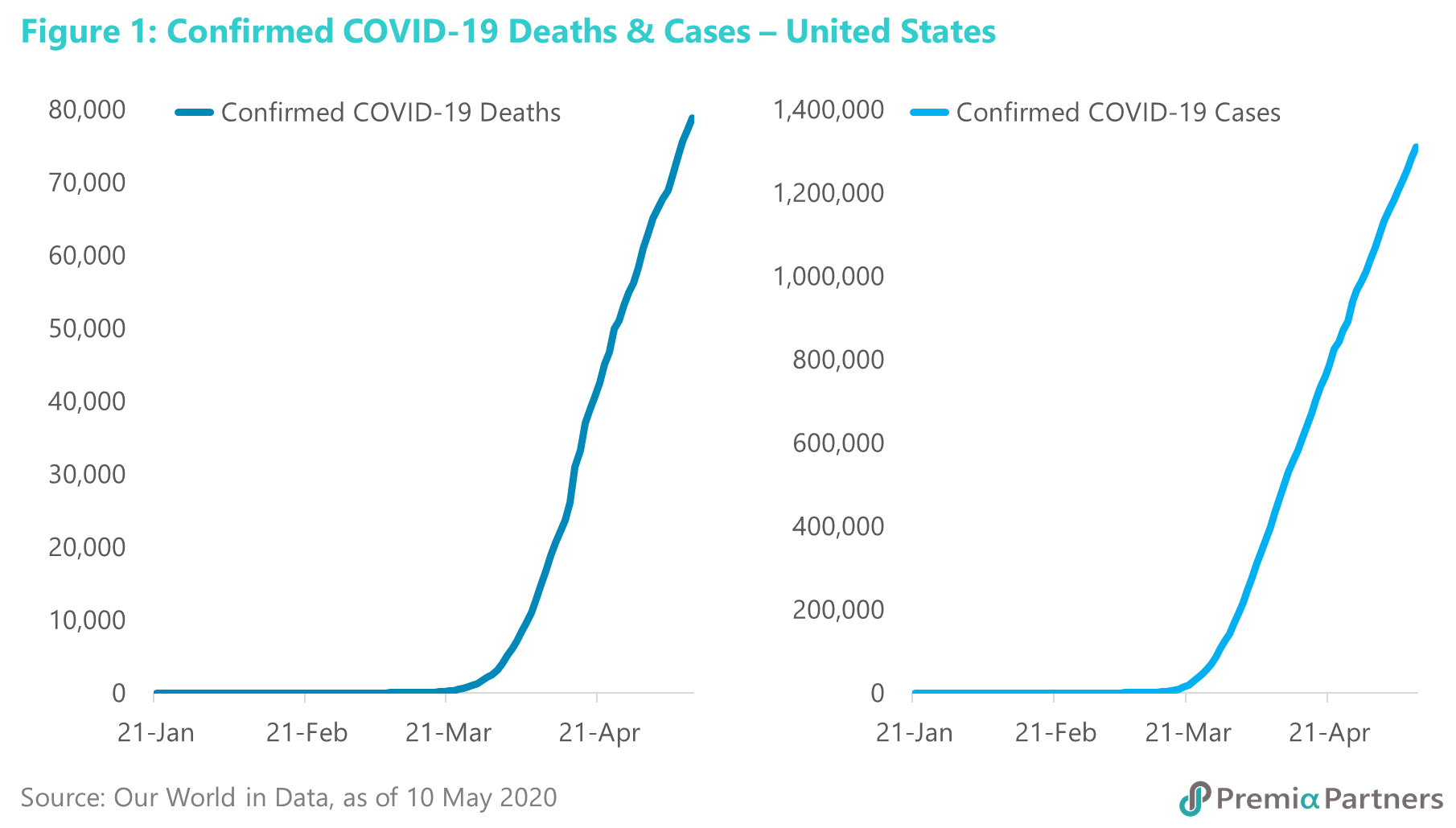 S&P 500 is trying to break above the 61.8% Fibonacci retracement. The index is now re-testing the 61.8% Fibonacci retracement of the entire fall from 20 February to 23 March. As we have said before, it is not unusual for bear markets to stage 50% retracements or even 61.8% retracements of large and steep falls. But it is unusual for it to make larger retracements. We should never rule it out. As John Maynard Keynes famously said, we are not the judges of the beauty contest. Nor we are even guessing how the judges are going to vote. As he put it: “We have reached the third degree where we devote our intelligences to anticipating what average opinion expects the average opinion to be.”

Market may be thinking this will end quickly. And this has been the assumption underlying the thinking of international agencies such as the IMF. That is, COVID-19 will be brought under control by 3Q20, allowing for a sharp economic rebound to start 4Q20. And indeed, there was news last week quoting Australian Nobel prize winning immunologist Professor Peter Doherty saying that a British vaccine could be ready by September.

Professor Doherty appears to be referring to Oxford University trials. A report in the UK “Telegraph” newspaper on Sunday 10 May said “several hundred Britons” have been given an experimental jab. The University’s website says results could be ready – depending on the transmission rates – from late June to October.

However, an ABC News (US) report referred to this as “Phase 1” tests. And Oxford University’s own Vaccine Knowledge Project website refers to “Phase 2” and eventually “Phase 3” trials involving “several thousand” participants. Then there would have to be “licensing” reviews by regulators. Beyond that, there is the challenge of mass production for global use. So, assuming everything goes well, and with regulators and manufacturers acting with great urgency, we suspect the earliest this could be available for mass vaccinations would be 1Q21.

What would one year of massive economic damage inflict on stock earnings? If successful, the Oxford University vaccine could bring forward the previous best estimates of a vaccine (mid-2021) by a few months. But that would still see massive damage inflicted on economies, household wealth, corporate balance sheets and national finances. We had previously pointed out that S&P 500 earnings fell by 40% during the global financial crisis. It is also worth noting S&P 500 earnings fell 30% during the Nasdaq Crash.

If we see a 40% decline in index earnings again, by end of this year, at the current price levels, the S&P 500 would be trading on over 30x trailing earnings. Okay, the market may choose to look past that too, towards end-2021 earnings per share. In 2009, S&P 500 earnings rebounded 14%. Assuming we get the same rebound, the trailing PE on year-end 2021 earnings would still be 27x. This looks a lot like a bubble driven by the Fed cutting its policy rate and buying down UST yields.

The different approaches taken by the US and China towards managing COVID-19 has likely set the stage for a widening of the growth differential between the two countries. Immediately, the earlier reopening of the Chinese economy means China’s GDP will still show a bit of growth this year. This compares to the controversial, tentative easing of restrictions in the US, only in May. Even if the US gradually normalizes from here, its GDP for will end 2020 with a big hole, which will take three to four years to fill.

Longer-term, the US focus on massive fiscal expansion for “misery alleviation”, without containing the virus, will lumber the country with a debt to GDP ratio that could exceed that of China, and risk further shutdowns that could damage growth even in 2021. And while China is looking at capital spending focused on building “new infrastructure”, US corporations will likely cut back on investment even after COVID-19 as they digest their higher debt levels. This will lower further the US’ already declining productivity growth rate.

Estimates of the time when China’s GDP (in US Dollar terms) overtakes the US ranges around the early to mid-2030s. But our “back of the envelope calculations” suggest that, as a result of the different policy approaches to COVID-19, China could bring forward the time its GDP exceeds that of the US by a few years, possibly before 2030.

US long-term growth potential has been declining anyway before COVID-19 because of declining labour force and productivity growth. US real GDP growth had been declining over the decades. In the period from year 2000, its GDP had been growing at a compound annual rate of around 1.9%.

China’s productivity growth likely to support GDP growth despite a declining labour force.  In China, the total labour force will decline in coming years. The labour force may have peaked at around 787.4 million in 2017, and has been declining marginally at around 0.2%-0.3% per year since then.  But that decline will be borne mostly in the rural areas. What will drive economic growth in the coming decade will be the much higher productivity work force in the urban areas.

According to HK/UK based Global Demographics Ltd, in urban areas, “because of the current age profile as well as on going rural to urban migration, the total employed labour force will continue to increase”, from 398 million 2018 to 467 million in 2027 and 485 million by 2037. If that is correct, we could be looking at 1.8% compound annual growth in the urban workforce in China over the next decade or so. But for the purposes of this exercise, we note the studies that argue China has reached its so-called “Lewis Turning Point” in rural-urban migration, and take the conservative assumption of 0.2% labour force decline per year over coming years.

COVID-19 is likely to do more damage to long-term US GDP growth than to China because of the different policy approaches to spread suppression and economic stimulus. If the IMF is right, COVID-19 will take the US GDP back to somewhere between 2017-2018 level in nominal USD terms. Meanwhile, China’s GDP will edge a bit higher for the full year 2020, because of its more rapid normalisation.

Much can be traced to the different policy approaches to handling the pandemic. China has focused on aggressive suppression of the spread through “lockdowns”. Its spending has targeted infrastructure – including “new infrastructure” such as 5G, big data centres, and high-speed rail.

The US, on the other hand, has thrown a massive amount fiscal stimulus at misery alleviation, but has not been anywhere near as effective in spread suppression. Indeed, it is already opening up while the infection rate curve is still steep. Three consequences:

Will China’s GDP overtake the US this decade? Yes, possibly. If China maintains its productivity growth, it should be able to manage a long-term average GDP growth rate of around 5.8% a year. Meanwhile, long-term US GDP growth from 2022 onwards could ease to 1.5% on lower investment/lower productivity growth. Taking into account IMF projected growth rates for 2020 and 2021, China could overtake the US in Dollar terms by 2029.

Assuming a lower rate of growth of 5.5% for China, to allow for lower international trade, doesn’t make a lot of difference. It would slow down the point at which the Chinese GDP overtakes the US by one year. That is, 2030. (Figure 3) 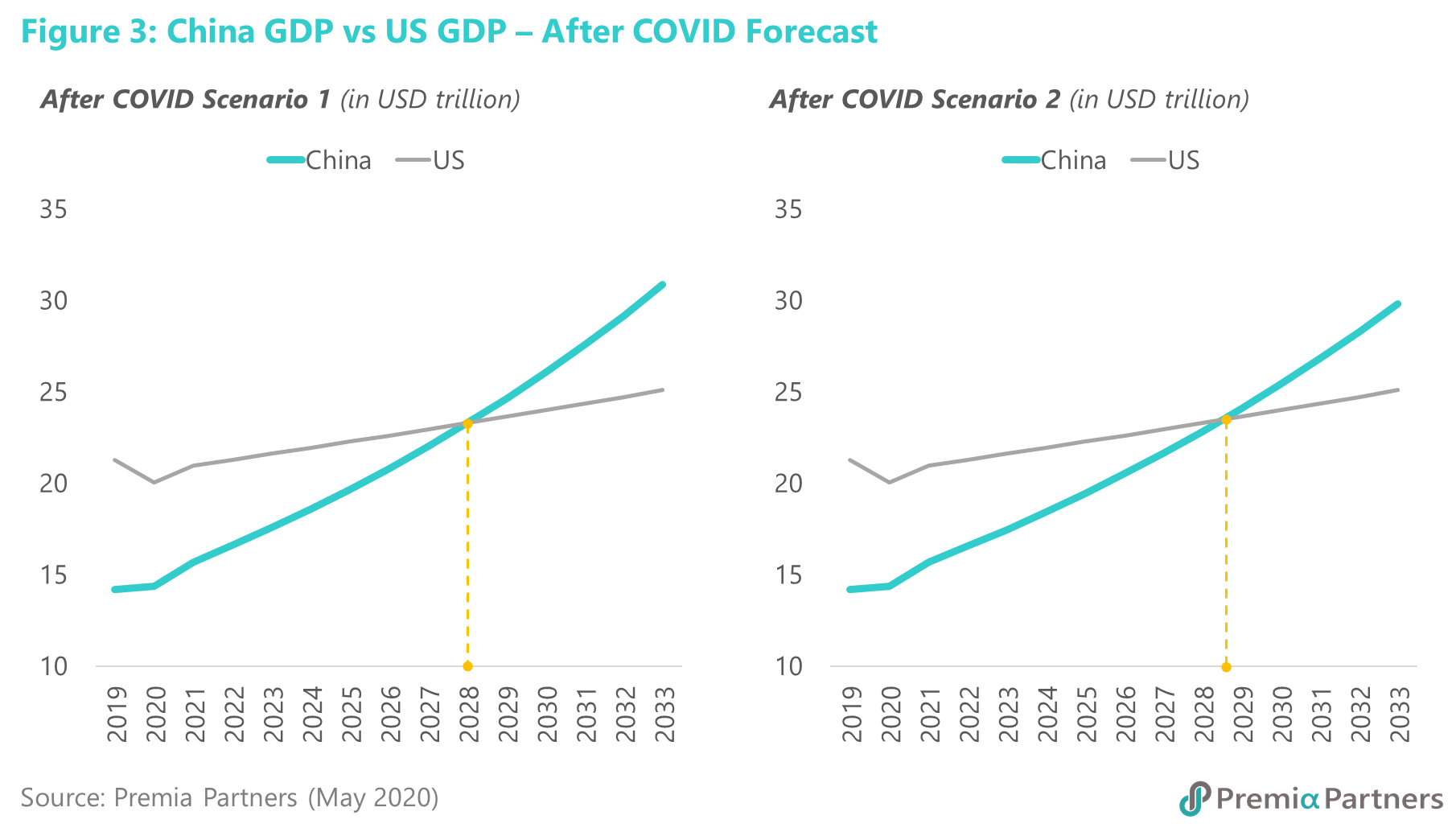 US Dollar – the Long Game
China rally - Does your exposure align with the outcome you desire?
Five reasons why Chinese stocks have been running hot
The coming debt default tsunami
What’s the impact from the recent rebalancing for our China Bedrock, New Economy, and Asia Innovative Technology ETFs?