The Chinese government recently launched a stimulus package around the idea of “New Infrastructure” in light of the COVID-19 pandemic. What exactly does this new buzzword #NewInfrastructure entail? And more importantly, where do the investible opportunities lie beyond the tech giants Alibaba and Tencent?

From the official definitions, the #NewInfrastructure initiative aims to focus on seven “next-generation” areas: with the primary four being 5G Networks, Data Centers, Industrial IoT, Artificial Intelligence, and a broader definition to include: Ultra-high Voltage, Vehicle Charging Stations and Inter/inner City Transportation. The plan is expected to see an unprecedented spending with over RMB 40 trillion in the coming years. 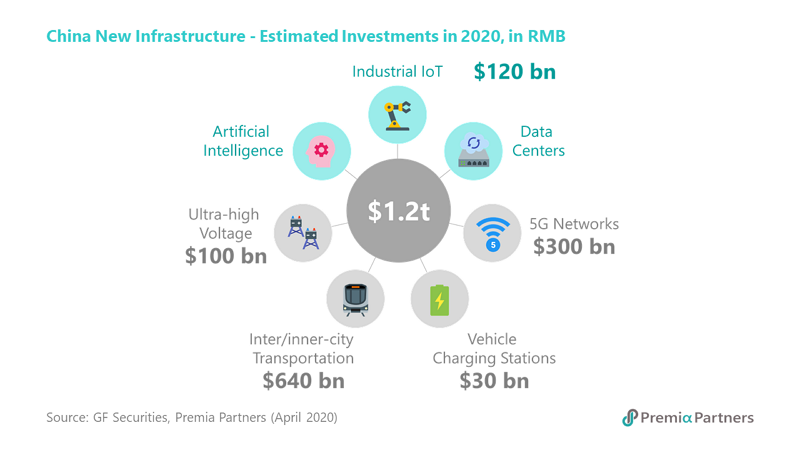 For those following us closely, a few of these sectors are megatrends we’ve been actively talking about for quite a while and have dedicated investment strategies on.  In this piece, we’d like to share some industry leaders in the 7 above-mentioned spaces that are probably lesser known to many investors.

With 2.5 trillion related investments in dedication, about 5 million 5G stations are expected to be built in China by 2025, creating significant potential across the value chain of 5G infrastructure.  As we first discussed last June in 5G: Taking off from the runway of growth, 5G will be revolutionary in enabling a massive IoT ecosystem.  Apart from those shared in a later piece last November, we also see new material leader Phichem Material and chip designer GigaDevice as key value chain beneficiaries as well. 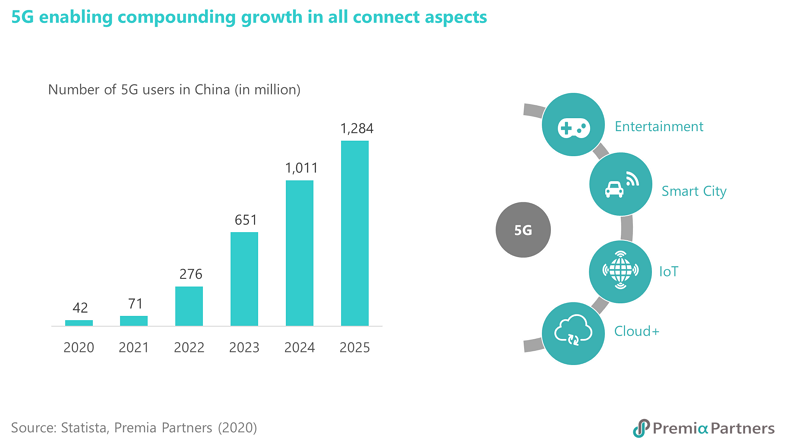 China IDC (internet data center) market achieved RMB 160 billion in 2019 with a 25% YoY growth, and the additional investment is estimated to be over RMB 110 billion during 2020-2024. Data center infrastructure is the base of cloud computing, and HCI (hyper-converged infrastructure) is the core solution for data center infrastructure. China’s HCI market is anticipated to grow at 40% in the coming three years according to estimates.  Apart from Huawei, Unisplendour (which specialises in chip design and cloud solution) and Sangfor (the domestic leader in cloud security and firewall infrastructure) are also strong players in the market.

While the COVID-19 outbreak has created significant disruption to many businesses, the data center sector is among the brightest spots as many offline activities have been moved to be online and cloud-based, and there’s a growing trend of digitalization from the consumer space to enterprise solutions. 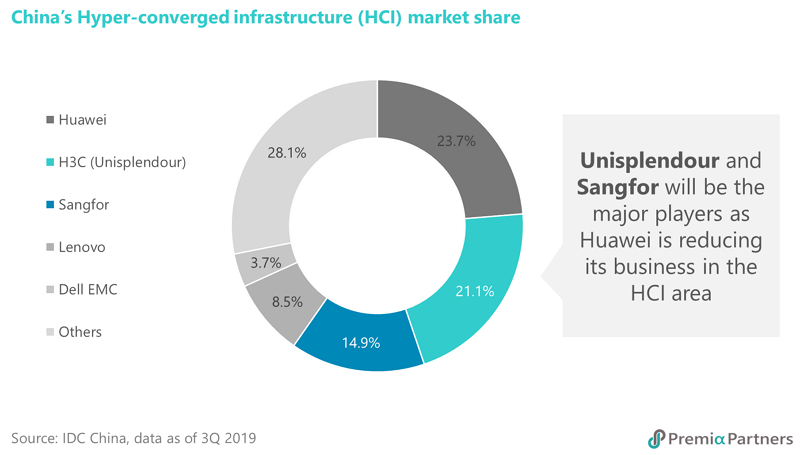 China industrial IoT market is expected to grow at a 5-year CAGR of 13.3%, achieving RMB 1 trillion by 2023. Advancing in industrial IoT has become a strategic priority and there as been favourable policy support as well.

While many are familiar with the white home appliance leaders Gree and Midea that have both been expanding into the smart home / smart manufacturing businesses, another notable area in industrial IoT is the SaaS, PaaS and IaaS platforms behind.  Yonyou is the largest ERP (Enterprise Resource Planning) software provider in China and the company has seen significant growth in its cloud-based platforms and services. 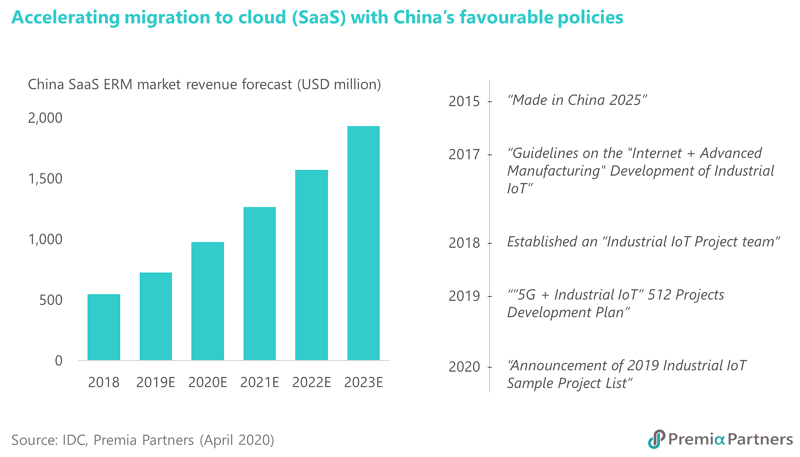 Additional investments in AI infrastructure is expected to reach RMB 200 billion by 2025, including 80 billion in AI chip, 25 billion in machine vision and 100 billion in AI-driven cloud platform, data service and operating system.

Ultra-high voltage (UHV) transmission is one of the extended sectors in the “New Infrastructure” concept.  UHV is a technology that carries electricity across vast distances with much greater efficiency than the high voltage lines.  China’s ultra-high voltage market is the largest in world yet concentrated within the key power players such as China XD and TBEA.  With bold construction plans for electricity supply across the country from west to east, investments in ultra-high voltage infrastructure are estimated to be over RMB 400 billion during 2020-2025.

China’s investments in electric vehicle charging stations are estimated to grow at a 5-year CAGR of 50.3%, reaching RMB 129 billion in 2025. Chinese power grid equipment leaders NARI Technology and Xuji Electric have been very involved in the development of charging stations.  SAIC’s subsidiary Anyo Charging is now the fourth largest charging station operator in China. The Company has been operating 18,000 stations nationally, accounting for the market share of 3.5%.  As the electric vehicle market continue to evolve and grow, the charging equipment manufacturers and operators are important backbones.

China’s ambitious "National 123 Transportation Circle" plan (one-hour commute in urban areas, two-hour travel between the cities of a conurbation, and three-hour reachability of major cities nationwide) is aimed to be established by 2035.  Investments in inter/inner city transportation in 2020 are estimated to achieve RMB 640 billion, including RMB 500 billion in inner-city railways and RMB 140 billion in inter-city transportation.  China Railway Construction and CRRC Corp are among the most significantly involved companies in this masterplan that creates regional economic clusters.

To capture the #NewInfrastructure trends in China, our two China strategies could provide you exposures to either the broader sectors (check out our China Bedrock Strategy) or focusing only on the primary four of 5G Networks, Data Centers, Industrial IoT, Artificial Intelligence (know more about our China New Economy Strategy).  For those interested in a broader geographical exposure beyond China A-shares while capturing the similar digital transformation megatrends, we also have an Asia Innovative Technology strategy.  Feel free to reach out for more details.

IIoT: Enterprise digital transformation and Industry 4.0 in China
Will China’s GDP overtake the US this decade?
Are you game? Opportunities from the competitive battlefields of eSports
China A Factor Review: 2020 Q1
Why is China-A New Economy more resilient and captures opportunities better through COVID and beyond?