US Dollar – the Long Game

Back to the future. Clues to US policy makers’ long game for the Dollar can be found in the long-term historical relationship between money supply growth, the inflation rate, and nominal GDP growth. Conclusion upfront: We are likely to see a long cycle of aggressive US monetary expansion ahead – to depreciate the Dollar, revive inflation, and boost nominal GDP growth.

This is Debt Sustainability 101: The final element of nominal economic growth is critical. Nominal growth has to stay ahead of interest rates if the US is not to drown in debt as the periphery of the Euro Area nearly did a decade ago.

Of course, the difference between the economies of the Euro Area’s “Club Med” and the United States is that the latter borrows in its own currency. That allows the US to over time inflate away the real value of its stock of accumulated debt by devaluing the Dollar.

Indeed, “loss of confidence” in the Dollar is not only good for the US economy. It has time and again been – and is likely to continue to be – the long game for the US policy makers.

The game changer and the Dollar bungee jump. At the early stage of the pandemic, the FX swap basis against the US Dollar widened dramatically, suggesting surging Dollar funding stress around the world.

That was as per historical norm – the Dollar typically strengthens during times of crises.  This is intuitive as the US Dollar accounts for around half of all world trade invoicing and global debt.  When businesses around the world face a sudden collapse in cash flows, but continued payments on US Dollar debts, it is also intuitive that the US Dollar should soar. Indeed, the Bank for International Settlements warned of just such Dollar funding stress in a publication written in the early weeks of the pandemic.

As it turned out, the Dollar Index DXY did surge 8.8% for 11 days in March. Yet, after that, it did the currency equivalent of a bungee jump, falling 10% from late March to late July (figure 1). 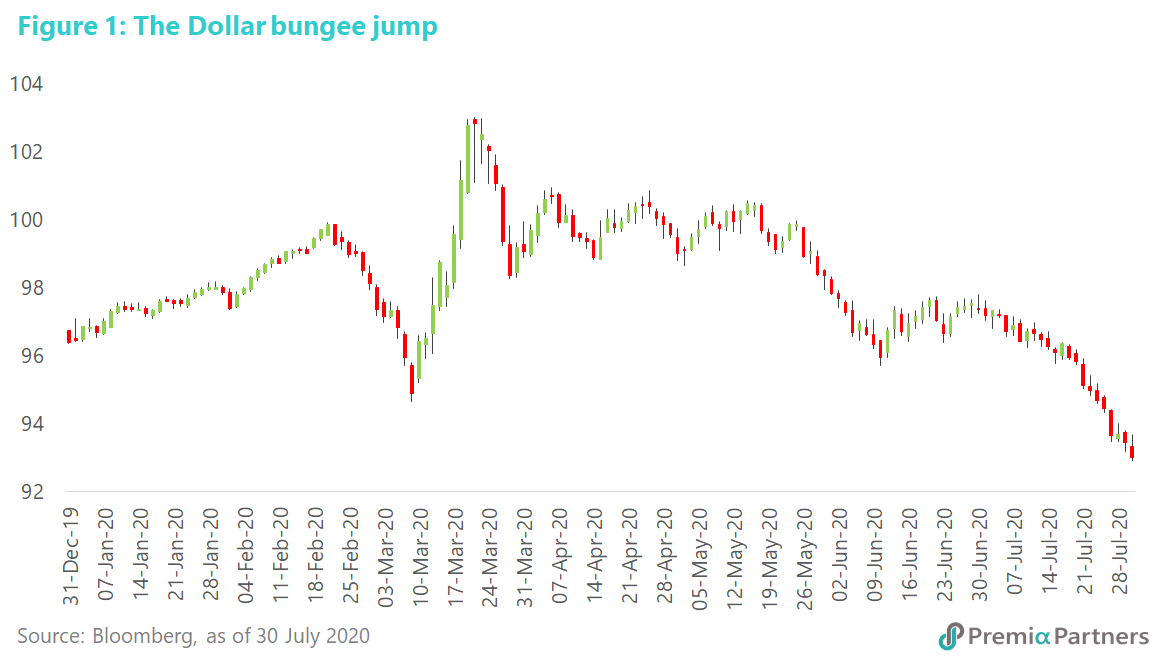 The debt mutualisation implicit in the recently approved EUR 750 billion European Union pandemic recovery fund accelerated the decline of the DXY. It presented the EUR as a more credible alternative to the Dollar. Put simply, it is at this stage, the “Anti-Dollar”.

The agreement potentially paves the way for much closer integration of the economies of the EU. It had been likened to a “Hamilton moment”. That was a reference to the first U.S. Treasury Secretary Alexander Hamilton in the 1790s – at the time when the US central government assumed the debts of individual states and sold Treasury bonds to fund them.

But as we wrote in the insight “US Dollar - COVID-19 and the long cycle down”, the real game changer was the Federal Reserve putting its foot flat-out on the accelerator pedal of monetary and balance sheet expansion. US M2 money supply grew 20% in just six months. The Fed’s balance sheet blew out 68% in 1H2020. Compare that with the European Central Bank’s 35% and the Bank of Japan’s 12%.  The Fed splashed that newly minted money all around the world via an expanding list of swap lines with other central banks. No surprise then that the Dollar Index DXY weakened. Sure, demand for Dollars surged as the pandemic hit cashflows, but supply overwhelmed demand.

The Great Depression and the disappearing gold coin trick. There is nothing new in this. During the Great Depression, the Roosevelt Administration suspended the gold standard that had been in place since 1913.

Until then, the Fed had to back 40% of the stock of money with gold, priced at USD 20.67 per ounce. In the midst of the Great Depression, and a run on the Fed’s gold holdings, the US Government enacted legislation to seize the country’s entire private holdings of gold coins and certificates – at USD 20.67/oz of course. After it nationalised the country’s gold holdings, the US Government legislated to increase the value of its nationalised gold holdings to USD 35/oz. That’s a stunning 31% devaluation of the Dollar in one fell swoop and that was critical in reflating the US economy from the Great Depression.

Guns, gold, and Dollar dominance. The United States emerged as the dominant global power through two World Wars. And that was in no small part due to its savvy strategy of limiting damage to American life and treasure by avoiding entry into those wars too early. The US entered WWI only in 1917, three years after the war started. In WW2, the US entered the fray only in December 1941, more than two years after war started.

Throughout the war, the US supplied armaments and other war-related equipment to its allies, in exchange for gold. After the war, the US had accumulated 70% of the world’s gold.

The war-devastated world, left with neither infrastructure nor gold, gathered at Bretton Woods in 1944 to agree on a new international currency architecture. They couldn’t hitch their currencies to a gold standard – they had very little. Since the US had most of the world’s gold by then, the rest of the world fixed their currency rates to the US Dollar, and the Dollar was backed by and convertible to gold at USD 35/oz. And so, the Dollar became the world’s reserve currency.

The Vietnam War, Nixon and another disappearing gold coin trick. By the 1960s, three things started to undermine the US Dollar. 1) The US current account surplus started shrinking and went into deficit by the early 1970s. Japanese and European exports became more competitive and US products less so. 2) The US budget went from surplus in 1960 to a deficit of almost 3% of GDP by the late 1960s, as domestic spending and the cost of the Vietnam War rose. 3) The US started printing more money, taking M3 to GDP from 60% in 1960 to 67% by 1965.

The US expanded money supply so much that there were more Dollars in foreign hands than the US had gold to back them up.  As a result, there was loss of confidence in the US Dollar, and the Dollar convertibility “option” under the Bretton Woods arrangement was increasingly “called”.  That eventually snowballed into a run on gold which the US could not sustain.

In August 1971, President Richard Nixon walked back the United States’ Bretton Woods’ commitment to back the Dollar with gold. Metaphorically, this was another disappearing gold coin trick. “Now you see it? Now you don’t!” The value of the Dollar plunged.

Long-term relationship between rates of growth in money supply, nominal GNP, and inflation – a logic that will return to drive the Dollar yet lower.  A study by a former research director of the Federal Reserve Bank of St. Louis, William G. Dewald found “a close long-term fit” between M2 growth, nominal GDP growth and inflation. His study, going back to 1875, found the 10-year averages of M2 growth, nominal GNP growth and inflation tracked one another – declining from around 1915 to 1930, rising from 1930 to 1945, declining again 1945 to 1955, and then rising again from 1955 to 1980 (figure 2). 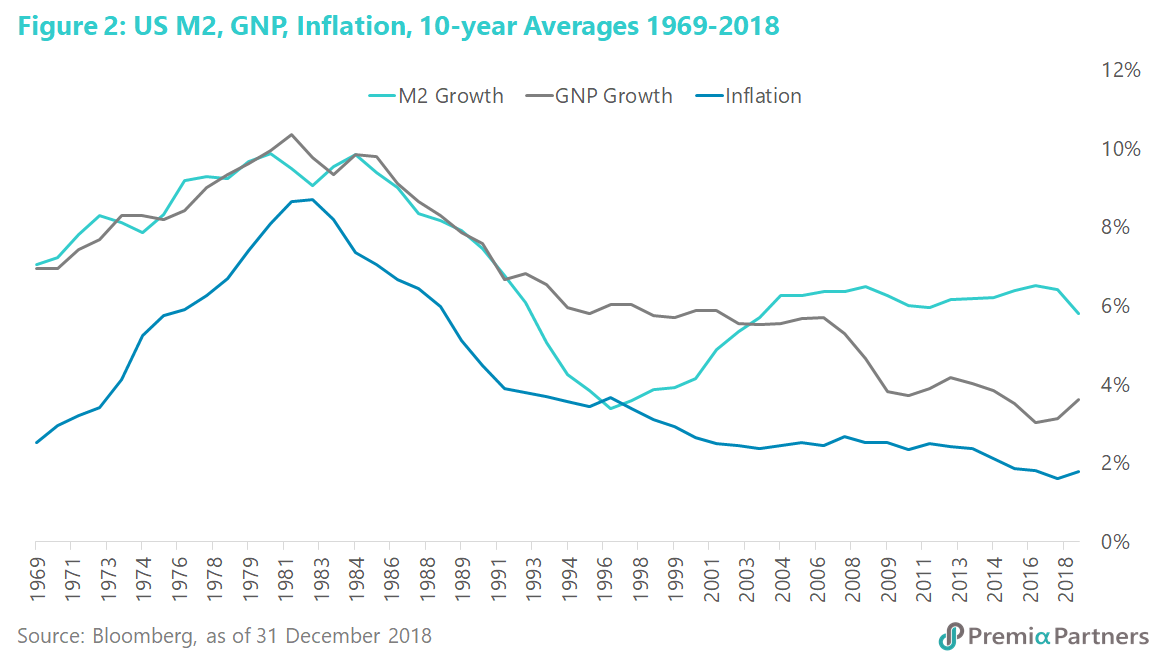 Referring to the work of Milton Friedman and Anna Schwartz, Dewald wrote: “When monetary growth accelerated in the 1890s, as engineering advances increased gold output, there was an associated inflation. Gold was then a standard into which currencies could be converted. When monetary growth collapsed in the early 1930s because of bank failures, there was an associated deflation.”

In both World Wars I and II, the Fed’s policies helped the government finance its debts. What followed were substantial increases in inflation, he wrote.

History will likely repeat again, albeit with a lag. The Fed and the US Treasury have already started devaluing the Dollar – the former printing money to fund the latter’s budget deficits, both very likely implicitly agreeing on the necessity of a long cycle of Dollar devaluation.

#1: There will be countertrend rallies in the Dollar but the trend is likely a series of lower highs and lower lows over many years. As noted in our June Insight, the trade-weighted US Dollar runs in long cycles up and down (Figure 3). But the trend over the past three decades has been lower highs and lower lows after each cycle. The upward cycle of the trade weighted Dollar which started mid-2011 likely ended 2Q2017.  We have likely already passed that 2-3 years of sideways drift we had seen in between previous cycles.  There will be countertrend rallies but the bounces are likely opportunities to get out of the Dollar. Although gold is short-term technically overbought, it will be a long-term beneficiary. 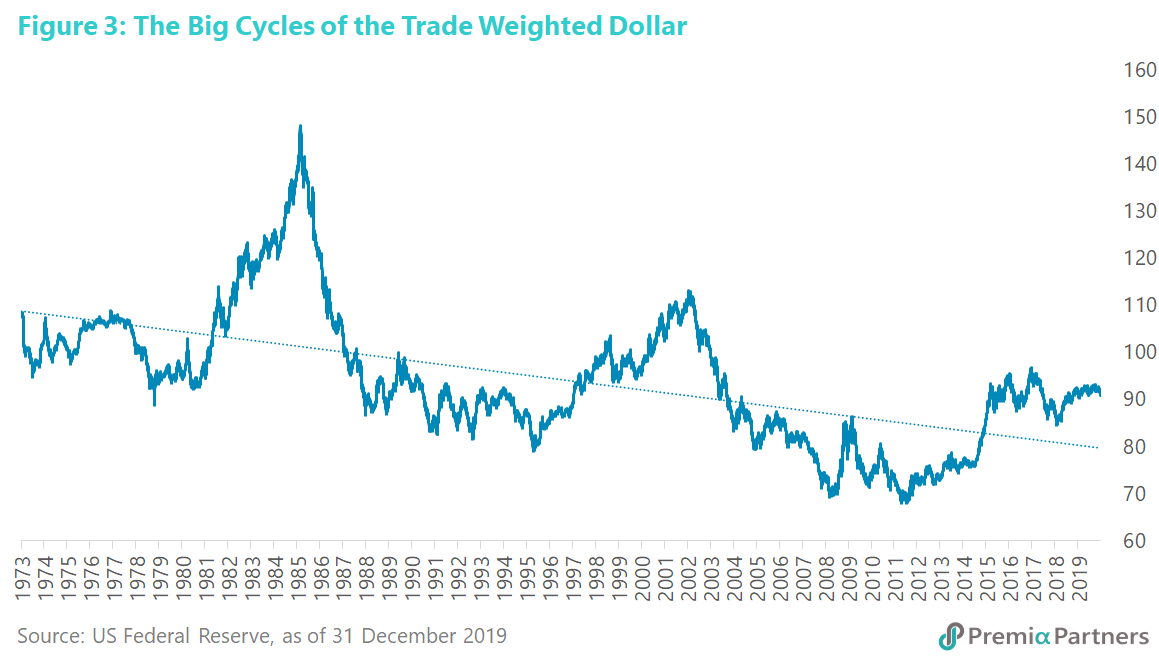 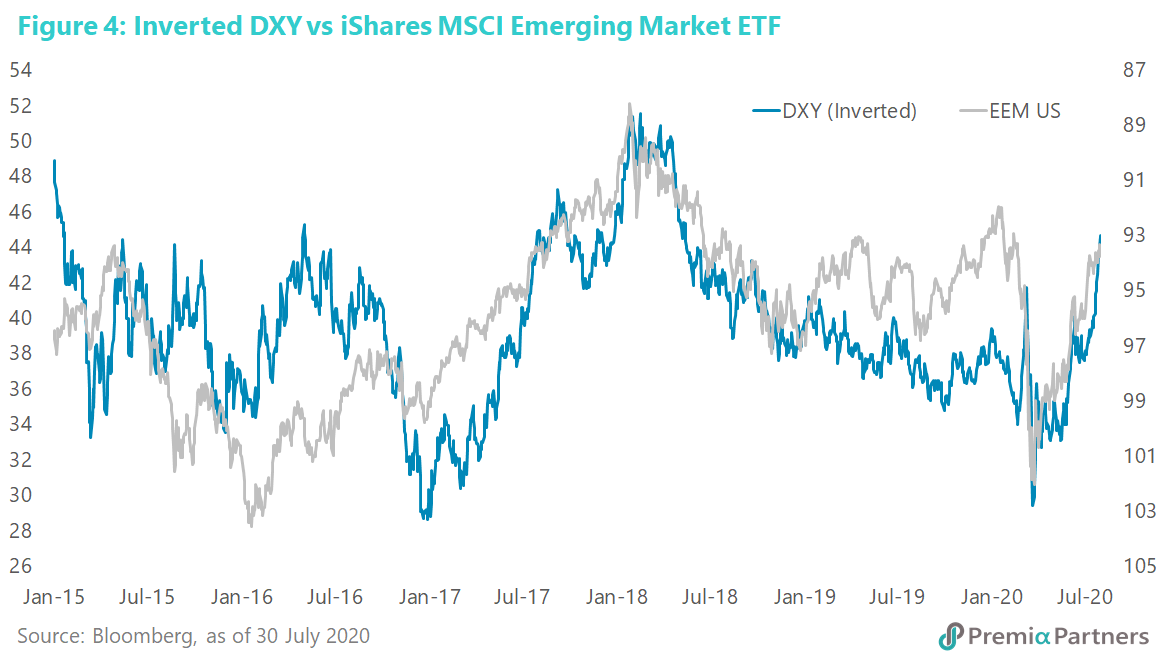 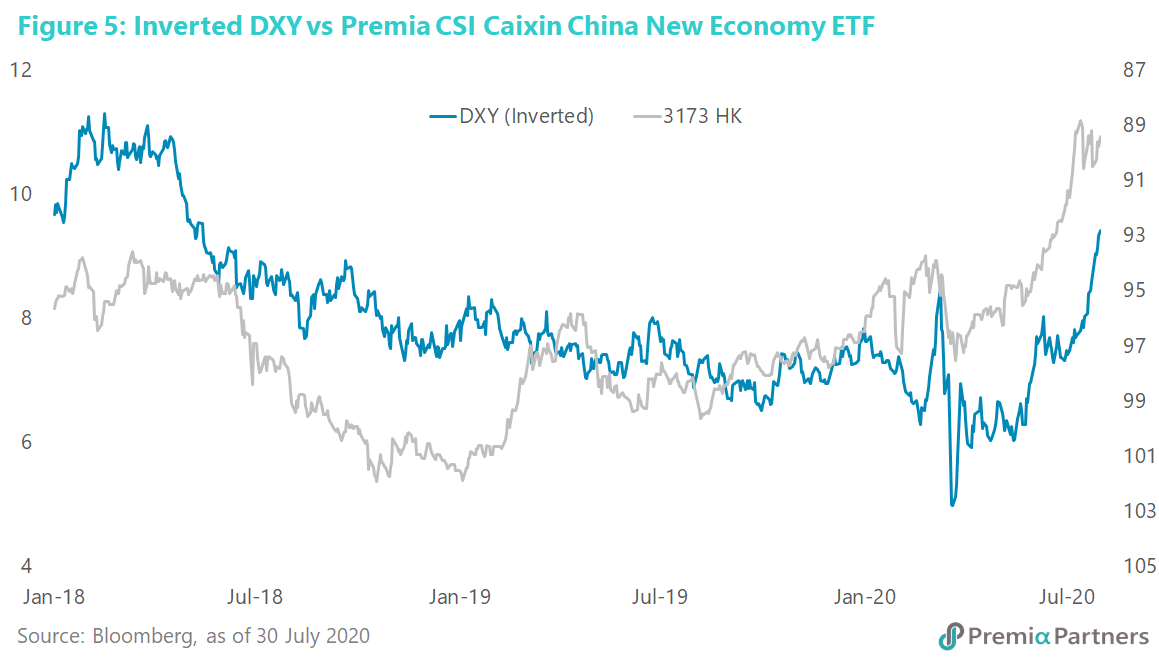 #3: Beware of overstaying the “lower for longer” credit trade. The best part of the US corporate credit trade has been taken. Yes, the Federal Reserve is backstopping even high yield credit spreads through exchange traded funds. It doesn’t want a blowout in spreads precipitating more corporate collapses.  However, is it in the Fed’s interest to squeeze spreads down even further at even greater cost to its own balance sheet – to save every corporate zombie that shows up at its doors? Probably not.

Pandemics are deflationary. They destroy demand, but leave productive capacity intact and under-utilitised. But when this pandemic is over – indeed, possibly before it is over, given that inflationary expectations could lead rather than lag reality – interest rates will likely also soar.

Back to Dewald: “Nominal interest rates are highly sensitive to inflation and inflationary expectations. High inflation expectations lead lenders to demand compensation for the expected depreciation in the purchasing power of the money they lend, and borrowers are forced to add an inflation premium to the interest rates they pay.”