The World Economic Forum recently compiled the 2019 report of World’s Top Emerging Technologies. In this article, we will highlight 5 of the emerging technologies and share a few related examples of innovative companies in Asia. We see many Asian companies at the forefront of researching, developing and implementing world’s top emerging technologies. The global and regional megatrends such as aging population, growing middle class, green environment will also continue to drive technology advancements in order to enable more innovative and efficient solutions for the society.

The World Economic Forum recently compiled the 2019 report of World’s Top Emerging Technologies identified by an international steering group of leading technology experts. These technologies are deemed to provide major benefits to the societies and economies, and expected to make significant inroads in the next several years. The top 10 emerging technologies for 2019 are: 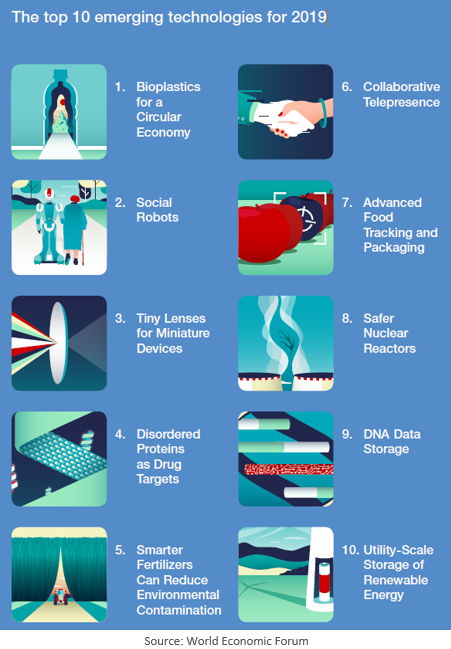 In this article, we will highlight 5 of the emerging technologies and share a few related examples of innovative companies in Asia.

1.       Social Robots
Unlike industrial automation robotics (e.g. well-known names like FANUC and Keyence), social robots are designed to engage with people and to establish an emotional connection.  Like most robots, social robots depend heavily on use of artificial intelligence to act on information received through lenses and sensors. Advancement in AI has enabled these robots to learn and understand algorithmic psychological insights based on voices, facial expressions and gestures.

In Asia, social robots are filling in a variety of roles in the ever-growing digitalized urban economy from hospitality services at hotels, shopping centres to urban infrastructures such as airports, hospitals, and banks.  Asia is home to more than half of world’s population. Aging population and shrinking labour forces have been strong megatrends in the region. Japan is one of the countries facing these issues and the country has made significant efforts in resolving such with its world-leading capabilities in robotics. Notable examples include the PARO Therapeutic Robot developed to reduce stress for patients in care facilities, and Sony‘s attempt of Aibo robot dog that incorporates artificial intelligence into its design, enabling the robot dog to develop a personality, learn tricks, recognize people’s faces, and create bonds with its respective owners.

iFlytek is a leading Chinese artificial intelligence company with strong capabilities in voice recognition technology. The educational AI robot AlphaEgg from iFlytek teaches kids to learn Chinese, mathematics and English via voice recognition. The cute egg-like robot is designed to be a tutor and a play-buddy that it can also play music, movies and educational games. Furthermore, the AlphaEgg has video chat functions that kids and parents can keep in touch remotely.

iFlytek has also developed a healthcare robot that passed the written test of China's national medical licensing examination, an essential entrance exam for doctors. The AI-enabled robot can automatically analyze patient information and make initial diagnosis. It has been used to assist doctors to improve efficiency in hospitals located in rural areas, bridging the gap between urban centres and remote parts of the country where doctors are in short supply. With a large and growing aging population, robotics is expected to play a bigger role in the healthcare sector.

2.       Metalenses for Miniature Devices
Technology has brought convenience to our lives, yet people’s expectations would never end. Phones, computers and other electronics have been accordingly developed lighter, thinner and smaller. Their optical components, however, have stubbornly refused to shrink. In fact, tiny lenses are difficult to be made with traditional glass-processing techniques, and multiple curved lenses are required to correct the chromatic aberrations.

Metalenses, the much smaller and lighter alternatives figured out by the engineers recently, open up new possibilities in consumer products such as cameras, virtual reality headsets and optical sensors for the internet of things, as well as laboratory tools such as microscopes. Global tech giants as Samsung and Google have devoted to the related research for its appealing potential applications. These flat and tiny Metalenses are foreseeable to be the next tremendous leap in optics.

Largan Precision is a Taiwanese company primarily engaged in the design and manufacture of optical lens modules and optoelectronic components. The company is one of world's leading manufacturer of smartphone lenses, supplying components to Apple, Samsung and major Chinese smartphone makers as Huawei, VIVO and OPPO.

Taiwan’s Central Research Academy Academia Sinica developed a broadband achromatic metalens that will greatly facilitate the development of flat optical components that are light, thin, small, precise and accurate. The lens could be as thin as a paper and the cost of optical components would be much lower once the mass production of metalens is realized. As a domestic champion, many believed that the technology could become Largan’s next secret weapon. Chinese optical lens giant Sunny Optical, on the other hand, is expected to be another dark horse in this aggressive competition.

The world is racing to implement 5G infrastructure in anticipation of future demands including the realization of collaborative telepresence. Asian countries like China, Japan and South Korea are outspending the US in building and investing in 5G infrastructure. Apart from telecom companies, semiconductor companies are in a prime position to benefit from the rollout of 5G. Semiconductors, which power network base stations and our cars, phones, and other connected devices, are at the core of all 5G network innovations. At the forefront of 5G adoption, Asian semiconductor players are accordingly believed to be benefited most from the trend, such as SK Hynix (Korea), TSMC (Taiwan) and Tokyo Electron (Japan).

To learn more about the hot topic 5G and the investment opportunities, please refer to the article “5G: taking off from the runway of growth”.

4.       Blockchain for Food Tracking
The world’s growing population and the consumers' desire to be provided with a wider range of foods have resulted in a longer and more complex food chain. Today, with the global food distribution, an infection that occurs at any point within the food chain has the potential of affecting any given population in the world. Around 600 million people, almost 1 in 10 worldwide, suffer food poisoning every year. It’s also costing consumers $30 billion to $40 billion a year in the world.

Blockchain technology, as a solution for traceability and transparency, is beginning to solve the food safety problems. Blockchain has the unique characteristic of decentralization and immutability, ensuring the feasibility and authenticity of the system. By integrating growers, distributors and retailers on a blockchain, a trusted record of a given food’s path through the end-to-end supply chain is created.

Chinese e-commerce giant Alibaba launched its own blockchain-encrypted platform to track food delivery. The company focuses on accuracy and transparency through its supply chain network, enabling users to verify and record data throughout the shipping process. Another Chinese e-commerce giant JD.com released a similar project as well. JD.com utilizes blockchain technology to build an anti-counterfeiting blockchain tracing platform. JD's consumers can easily find out that information by scanning the bar codes on either JD mobile app or WeChat. As of now, there are over 700 brands, 60 thousand SKUs and 1 billion encrypted data on JD's Blockchain Anti-counterfeiting Traceability platform.

5.       Storage of Renewable Energy
Emissions of carbon dioxide would have to be cut by 45% by 2030, to keep the rise in global temperatures below 1.5℃ this century. At the forefront of energy transition, cities are increasingly adopting renewable options. At least 100 cities across the world reportedly generated 70% or more of their electricity from renewable energy sources in 2018.

The primary challenge in the widescale adoption of renewable energy, however, is its intermittent nature. The energy storage accordingly plays the key role in the trend – the market for energy storage is estimated to be double from 2018 to 2019 and triple from 2019 to 2020. At least for the coming decade, lithium-ion battery technology is poised to dominate the energy storage future, with the potential to shift solar-generated power to the evening peak in demand.

LONGi Green Energy is a world’s leading manufacturer of high-efficiency monocrystalline solar cells and modules. The company is now the largest supplier of monocrystalline products in the world, with more than 40% market share. As monocrystalline solar panel market is growing, the company will continue to ride the industry wave in the transition to high-performance mono-based products. Moreover, Chinese solar manufacturers like LONGi and Jinko are most likely to be the beneficiaries from the recent US tariff exemption for bifacial solar panels. Existing PV factories in Asia are also expected to be retooled to make bifacial panels with shipments arriving at scale in the US by late 2019. The tariff exemption will primarily help to drive the uptake of bifacial modules in the US utility-scale market, and further worldwide.

Murata Manufacturing is a Japanese manufacturer of electronic components. The company has a dominant global market share in ceramic filters, high-frequency parts and sensors. Murata Manufacturing’s lithium-ion battery business, purchased from Sony, has been growing rapidly. The company plans to start mass production of all-solid-state batteries in 2019, which is the highest level of capacity in the industry. Recently, the company is also aiming at the electronic vehicles and new energy markets.

Premia ETF Strategy
In short, we see many Asian companies at the forefront of researching, developing and implementing world’s top emerging technologies.  The global and regional megatrends such as aging population, growing middle class, green environment will also continue to drive technology advancements in order to enable more innovative and efficient solutions for the society.

Premia Asia Innovative Technology ETF (3181 HK / 9181 HK) intends to capture technology-enabled innovation leaders in Asia, following revenue-based company selection in partnership with FactSet. The ETF currently holds most of the example companies above, as well as many other innovation leaders in digital technology, industrial automation and life science. The chart below summarizes the ETF’s holdings after its recent rebalancing in June 2019: 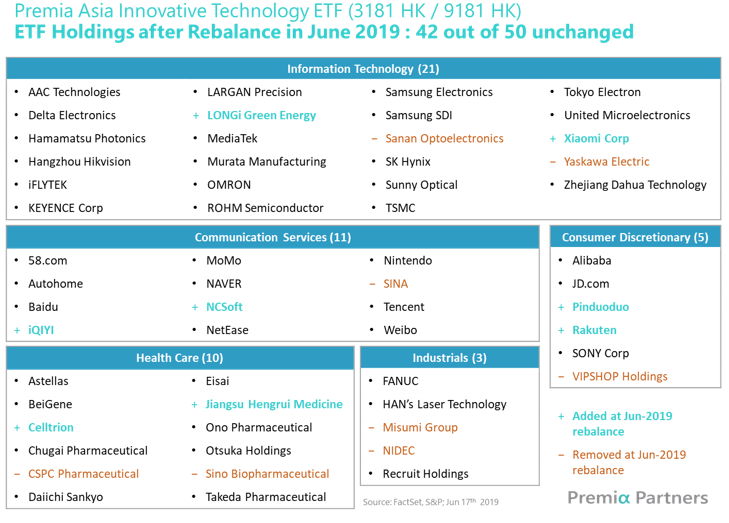 The article “Targeting Asian Growth Through Innovation” gives a detailed discussion into the index methodologies, and you may learn more about the Premia Asia Innovative Technology ETF (3181 HK / 9181 HK) at the product page.

5G: taking off from the runway of growth