Is Vietnam the next target in the trade war?

Vietnam is seen as the country benefited from the trade war between China and the US. Samsung is assembling half of its mobile phone in Vietnam and Apple is also beginning to start the production in the nation, so it is not surprising if your next iPhone will be made in Vietnam. Investors are enthusiastic about the bright prospects of Vietnam as major upcoming world factory, but Trump’s recent critics lead to a concern if this Southeast Asian country may become the next victim of trade war. We will elaborate further about the trade situation of Vietnam at the moment, the outlook in near future, and the market reaction in this article.

The US Commerce Department imposed duties of more than 400% on steel imports from Vietnam and Trump accused the southeast Asian nation as the single worst abuser of everybody, led to investors questioning if Vietnam would become the next target in the trade war.  We believe that investors should not overreact on this single measure though.  In 2018, the US imported different steel products from more than 85 countries and territories with the top 10 sources represented 77% of the total volume of 23.8 million metrics tons.  Although the steel imports from Vietnam increased at a remarkable rate of 45% last year, the country only ranked the 9th with a market share of 3%, far behind the volume of Canada, Brazil, Mexico, Korea, or Russia.  With Trump’s tweets opening fire everywhere including China, India, Mexico and EU in the past, one should now realize that trade tariff is naturally a political tactic under Trump administration’s greater scheme.  If looking into the steel trade of Vietnam closely, a significant portion of its exports is related to the ultimate source of Korean and Taiwanese exports to Vietnam for minor processing.  It means this trade re-routing could get solved without much effort.  Other than that, Vietnamese producers may shift their targeted market from the US to other markets including the domestic one.  The news so far has not created much impact to Ho Chi Minh market or even the stock prices of steel companies. 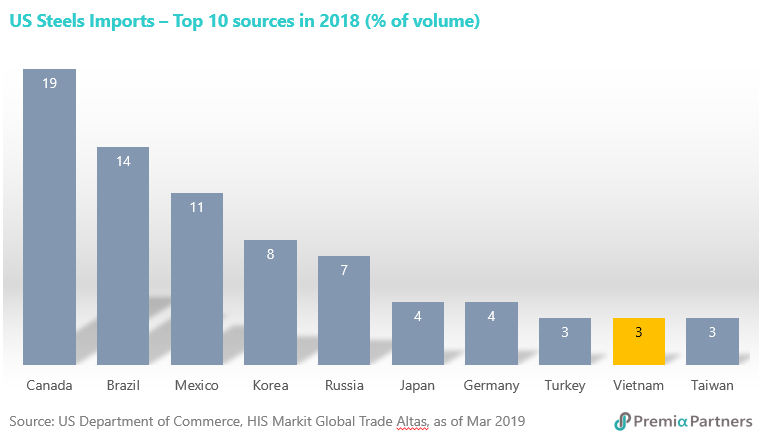 Vietnam is now the 13th largest trading partner with the US in the first five months of 2019, accounted for a market share of 1.8% in terms of trading value, versus Mexico’s 15%, Canada’s 14.8%, and China’s 13%.  Vietnam’s overall trade amount with the US is around USD 30 billion year-to-date, relatively small compared to a lot of other countries’, but the growth is inevitably strong at 32.3% year-on-year.  Vietnam’s current trade surplus with the US, standing at USD 22 billion, is less than one-sixth of China’s and about half of Mexico’s.  That explained why Trump began the trade war first with China and then followed by Mexico.  Vietnam government reacted promptly and constructively right after the accusation from the US, voicing out its determination to reduce its trade surplus with the US and cracking down on fraudulently mislabeled products for exports.  Local newspapers revealed that certain Vietnamese-made televisions and ovens were almost entirely made from Chinese imports in finished form.  The single task that the workers need to do was simply removing the original labels and put in new “Made in Vietnam” stickers.  Hanoi is now calling for a cross-agency effort led by National Steering Committee Against Smuggling, Trade Frauds and Counterfeit Goods to hammer out rules to prevent illegitimate transshipments and to close the loophole that some countries are taking advantage of Vietnam’s status in free trade.  Prime Minister Nguyen Xuan Phuc also requested the officials to maintain regular and frequent communication with American counterparts in order to avoid any heightened conflict. 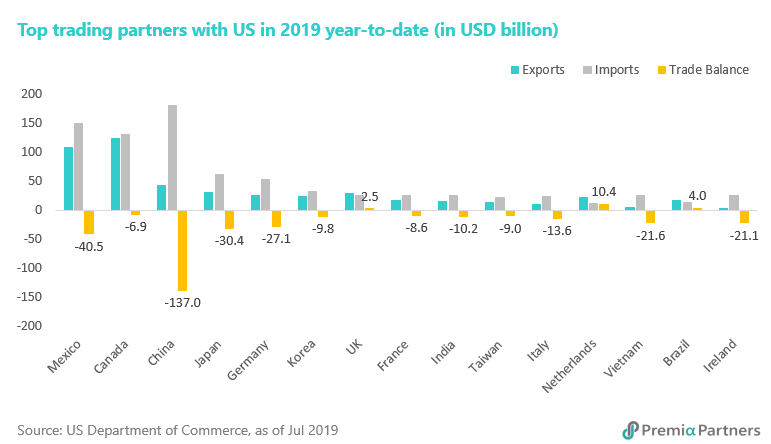 For Vietnam’s exports, US, China, Japan, Korea, and Germany are the top five destination with a combined share of 59.4%.  If grouping them into continents, 48% goes to Asia, compared to 24% to Europe and 23% to North America.  The annual growth rate of exports heading to Asia is the highest at 31%, followed by Europe’s 22% and North America’s 15%.  It is expected the breakdown may look quite different going forward with various bilateral and regional free trade agreements becoming effective in coming years.  In terms of product category, machine, footwear, and plastic are the top three exports items, taking a share of over 70% in total value.  Within the machine segment, TV panels, mobile phones, and semiconductors are the major products selling to overseas customers, contributing 14%, 6.7%, and 6.4% of total exports respectively.  Samsung Electronics is one of the most important companies behind the strong numbers of these high value-added goods.  Over the past 10 years, this Korean chaebol has grown steadily in Vietnam, with high-tech manufacturing bases in Bac Ninh, Thai Nguyen, and Ho Chi Minh City, with a total investment of over USD 17 billion.  The company now employs 35% of its global staff from factory workers to R&D engineers in Vietnam, which provides close to 40% of all Samsung’s products.  Interestingly, steel related products, the subject of the US tariff this round, only account for less than 1% of all Vietnamese exports. 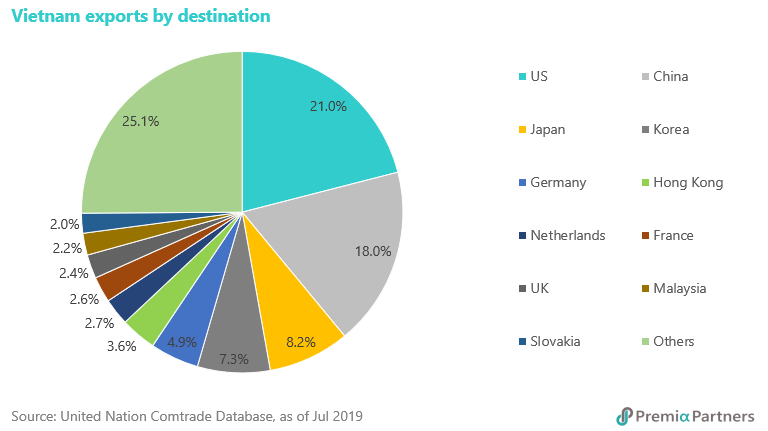 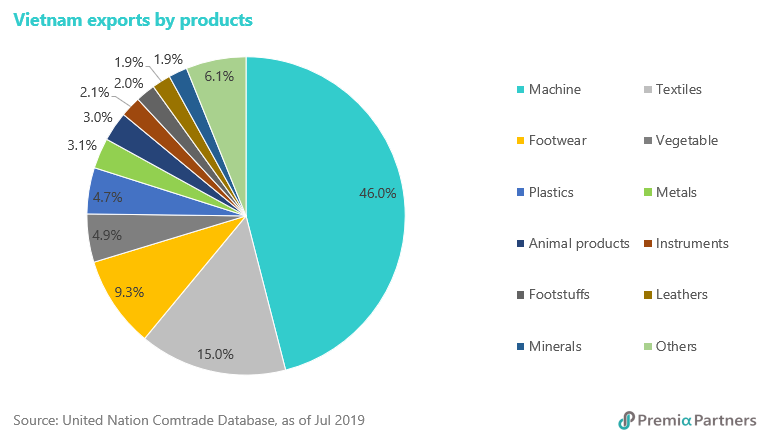 Since becoming a member of WTO in 2007, Vietnam is strongly committed to the multilateral trading system and considers it the focus of the country’s economic integration policies.  The authority has carried out reforms that relax the controls over trading rights, unifies the exchange rates, renews the tax system related to trading activities, removes the non-tariff barriers, and deregulates the trade regimes.  Vietnam has reduced the tariff imposed on all the imports trade gradually in the past 25 years, driving the weighted average rate down from the 21.1% in 1994 to close to 2.7% recently, while the total trade value grew rapidly at a CAGR of 17.5% during the same period of time, increasing from USD 9.9 bn in 1994 to over USD 472 bn last year.  Besides, Vietnam is also proactively reaching agreements with different countries in order to open up opportunities for the nation in the global market.  The latest addition is European Union-Vietnam Free Trade Agreement (FTA), which will pave the way for tariff reductions on 99% of goods between the trading bloc and the Southeast Asian country.  Although it still needs the approval of the European Parliament, the deal is the first of its kind between EU and a developing country in Asia, i.e. Vietnam is ahead of Indonesia, Malaysia, Thailand, and the Philippines to fix the terms.  The government expects the agreement will boost Vietnam exports to EU by 20% by 2020 and lift up the GDP by 2.2% to 3.3% by 2023.  Vietnam is also involved in the Regional Comprehensive Economic Partnership (RCEP) to take advantage of a market that is home to 50% of the global population.  The RCEP is a proposed free trade agreement between ASEAN Countries and Australia, China, India, Japan, South Korea, and New Zealand.  Member countries are targeting to finalize the deal at the end of this year. 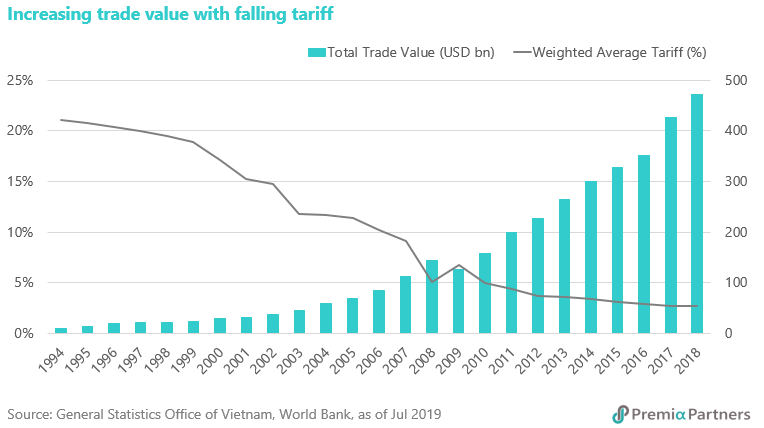 Last but not least, Vietnam is one of the eleven founding members of Comprehensive and Progressive Agreement for Trans-Pacific Partnership (CPTPP), which is evolved from the original Trans-Pacific Partnership after the US withdrawal.  The CPTPP countries have pledged to cut 97%-100% of tariff lines on Vietnamese goods by the end of the roadmap.  Vietnam is expected to benefit immediately in trade, especially export activities, including elimination of textiles and footwear tariffs by the majority of CPTPP members upon entry into force.  The Ministry of Planning and Investment estimates that this partnership will increase the country’s GDP by 1.3% and exports by 4.0% by 2035.  Although the incremental trade will not be material for countries with which Vietnam has already signed bilateral or multilateral trade agreements but for Canada, the impacts will be positive.  Canada is the second largest market among CPTPP members with which Vietnam has yet had a bilateral trade agreement.  The country commits to cut 94.9% of import tariff lines, or 77.9% of its import turnover from Vietnam.  For Mexico and Peru, the impact is positive because the import and export products of these two markets are complementary rather than conflicting with Vietnam. 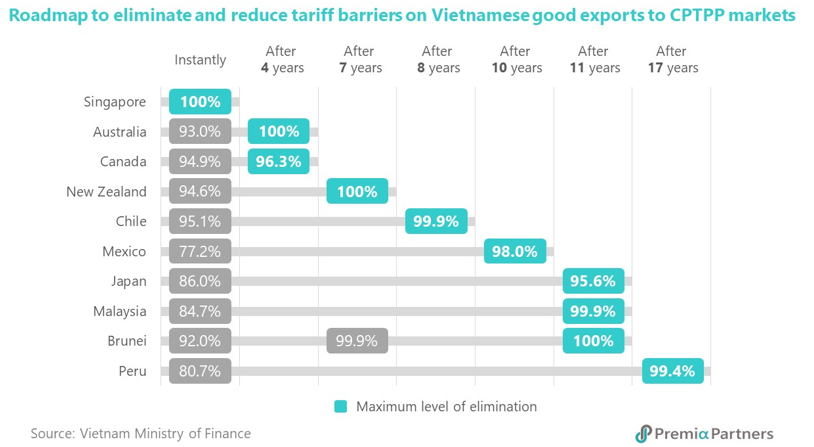 Given the relatively small trade value between Vietnam and the US, it is unlikely to see that US will impose similar measures to this Southeast Asian nation as in what it has done to China, say applying a duty of 25% for most exports.  That’s said, it is possible to expect increasing conflicts as Vietnam’s economy and trade activities continue to grow.  That’s why the bilateral FTAs like the one with EU and Korea, and multilateral partnership like RCEP and CPTPP would be helpful for Vietnam to expand different markets covering both developed and emerging ones.  Surprisingly, Vietnam stock market, represented by MSCI Vietnam Index, outperformed the overall emerging markets, Asia Pacific, and emerging ASEAN since Trump’s negative comment appeared in late June.  It was up 3.7% month-to-date in July compared to the return of less than 1% in the other markets.  When going through the financial statements of the constituents of MSCI Vietnam Index, we found that only a handful of them have revenue exposure from overseas with a weighted average of 7.8% revenue collected in foreign countries.  Within that low number, over 40% of this revenue come from Vietjet Aviation, an airline offering domestic and regional flights services, meaning that the actual export-related earning impact maybe insignificant. 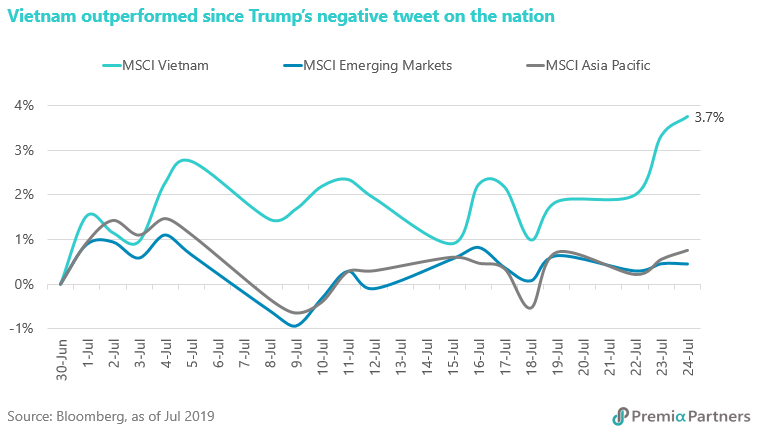 Consumption story of Vietnam
Is Vietnam the next target in the trade war?
A better way to access the up and coming “Superstar” of Asia: Vietnam