The Great Divergence between China and other Emerging Market economies

The great divergence between economic growth in China versus the rest of the Emerging Markets post-COVID-19 has increased the likelihood of a parting of ways between China and EM in asset allocations.

The great divergence between economic growth in China versus the rest of the Emerging Markets post-COVID-19 has increased the likelihood of a parting of ways between China and EM in asset allocations.

It also raises doubts about the idea that the roll-out of COVID-19 vaccines will result in a rotation of funds and outperformance from China to other Emerging Markets.

China already accounts for over 40% in the MSCI Emerging Market Index. The speed at which it could overwhelm that index has just increased.

While China grew its GDP back to pre-pandemic levels last year, other EMs are not expected to do this until late this year. This economic divergence was highlighted by the International Monetary Fund in its January World Economic Outlook, which showed that the Chinese GDP had 1) recovered above its pre-pandemic size; 2) and it had also gotten back onto the growth trajectory as forecast by the IMF before the pandemic (in its January 2020 outlook report). By contrast, Emerging Markets ex-China’s collective GDP is not expected to return to pre-pandemic levels until 3Q of this year. And the IMF does not expect it to even narrow the gap between where it is now and the IMF’s pre-pandemic growth forecast trajectory within the its forecasting timeframe. (Figure 1)

The debt overhang in EM ex-China could hold back “normalisation” of their economic growth for a long time. China still has ample financial resources, with US$3.2 trillion in foreign exchange reserves. More importantly, it is a current account surplus economy.

On the other hand, much of the Emerging Markets have suffered deteriorations in their sovereign balance sheets as a result of the COVID-19 pandemic.

Kristalina Georgieva, Managing Director of the IMF wrote late last year that “about half of low-income countries and several emerging market economies were already in or at high risk of a debt crisis” prior to the COVID-19 pandemic, and the further rise in debt since then “is alarming”.

“Just as they are starting to recover from the pandemic, many of these countries could suffer a second wave of economic distress, triggered by defaults, capital flight, and fiscal austerity,” she warned.

China’s high savings rate puts it in a much stronger position vis-à-vis other EM economies. While much had also been made of China’s debt to GDP, China’s current account surpluses mean it is a net saver nation. By definition, it saves more than it invests. And China’s high savings rate is the flipside of its high levels of investment and corporate borrowing. Remember China has a savings rate which ranged from 51% of GDP in 2010 to 44% in 2019. If Chinese corporations did not borrow and invest as much as they have been doing, China’s current account surpluses might have been even larger, almost certainly to the United States’ even greater annoyance.

Indeed, China is the world’s biggest creditor nation. According to Harvard Business Review, the Chinese State and its subsidiaries have outstanding claims of US$1.5 trillion via direct loans and trade credits to 150 countries around the world.

Once again, the question is being asked – what do you do with China in your asset allocation model? China’s economic growth was already consistently outstripping the rest of the Emerging Markets before the pandemic. Post the pandemic, that divergence will grow even larger. Meanwhile, China’s financial resilience profile will also diverge along with its growth performance. Its vulnerability to global financial disruptions will be very different – much lower – from other EM economies. Indeed, instead of being driven by the same risks, China is already in a position to be a driver of risks for Emerging Markets, through its commodity consumption, provision of capital and sheer economic heft.

In an insight published last year, we raised a few ideas on how to rethink China in asset allocation. One possibility is to think of China the way asset allocators have been thinking of the United States and Japan for decades – as a stand-alone equities segment. If we do that for the world’s largest and third largest economies, it is not a stretch to think the same for the world’s second largest economy. Apart from its economic size, its market characteristics are already very distinct from everybody else. 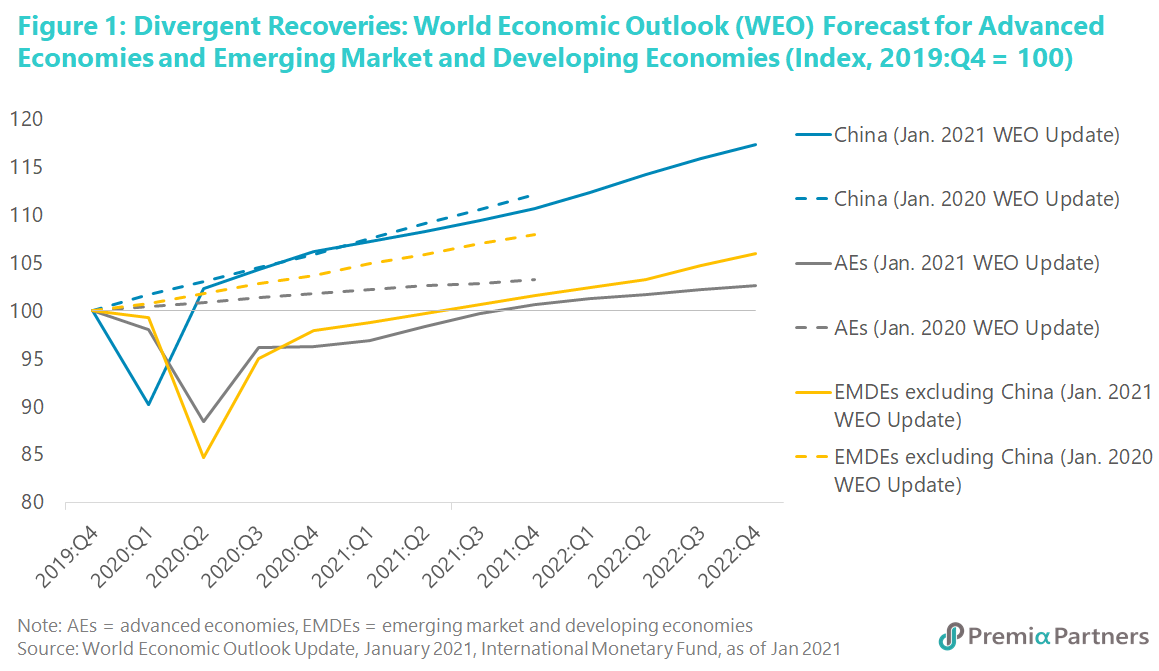