The COVID-19 pandemic could accelerate new thinking about Emerging Markets in asset allocations.

China is long overdue as a separate equity segment. As MSCI said last year: “The growing size of China within emerging markets raises the prospect for investors of making dedicated allocations to China.”

Indeed, in recent years, China has increasingly come to be accepted in Asian private bank and family office asset allocations as a standalone segment. This is likely to gain even wider acceptance as a result of growing divergence between China and Emerging Market economies, in both economic growth rates and economic resilience characteristics. 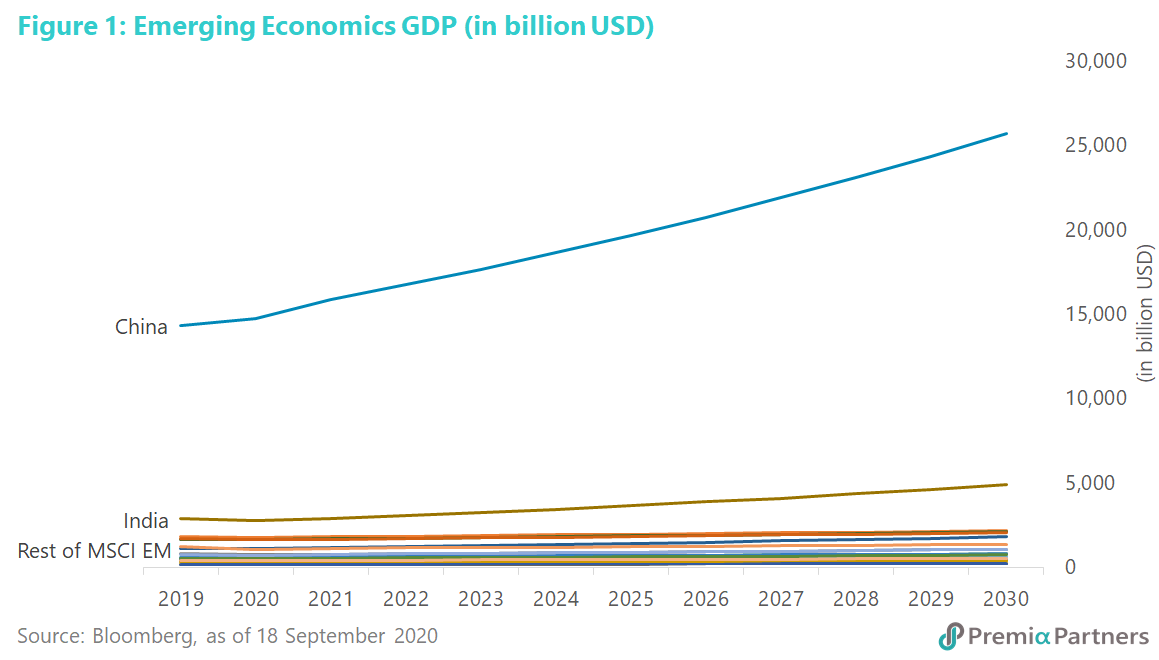 Overdue recognition of size, growth and differences. The US is a standalone equity segment in most asset allocations, and that stands to reason for its size and unique characteristics.

Japan has also been treated as a separate segment.  That was reasonable given it was the second largest economy in the world in US Dollar terms, but that changed 10 years ago.

By end 2010, China became the world’s second largest economy, with a GDP of almost US$5.8 trillion, compared with almost US$5.5 trillion for Japan. That differential has widened enormously since then. China’s GDP has ballooned out to $14.3 trillion by end of last year, while Japan’s GDP shrank to around US$5.2 trillion.

Yet, in many asset-allocation models, Japan is still (and that is reasonable given its distinct characteristics) a standalone segment, while China is subsumed in Emerging Markets. The risk is not of China being subordinated by Emerging Markets, but of China eventually swallowing up the EM segment.

By our estimates done before-COVID-19, China should overtake the US as the world’s largest economy in US Dollar terms sometime between 2031-2034, depending on growth assumptions. However, taking into account the damage done to the US economy by the pandemic, it is possible that China could overtake the US as early as 2029-2030.

Emerging Markets are more correlated with US equities than with China. The MSCI Emerging Markets Index’s 10-year correlations with the S&P 500 and Stoxx Europe 600 indices are very much higher than with Chinese equities. The MSCI Emerging Market’s 10-year correlation against the S&P 500 is 0.70, and 0.74 against the Stoxx Europe 600.  It is only 0.44 against what we call “Old China” equities (proxy: FTSE China A50 index), and even lower at 0.35 against what we call “New China”, represented by ChiNext (Figure 2). And here’s why: 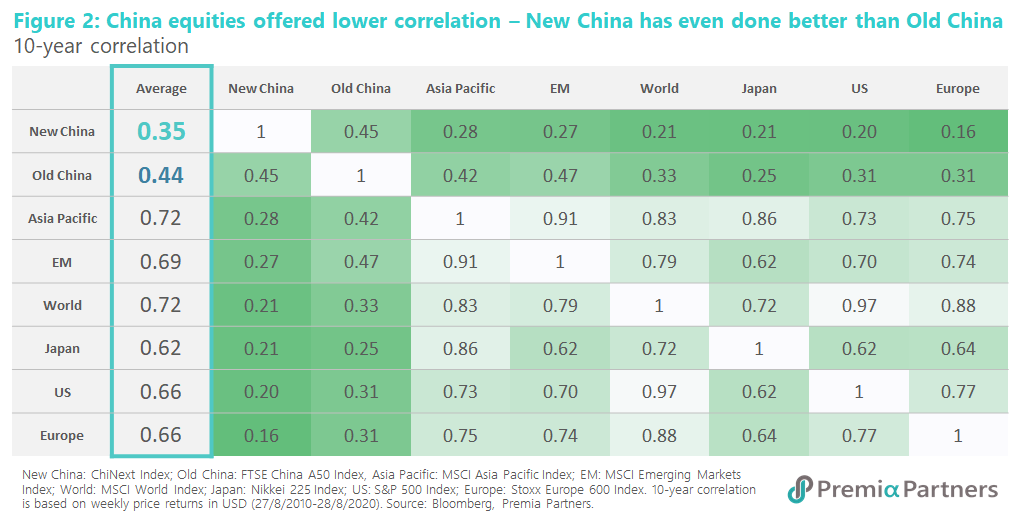 However, that doesn’t speak of what lies “under the hood”. Beijing and Shanghai’s per capita GDP are around US$20,000. According to a McKinsey Global Institute 2019 report, China was the second biggest spender in the world on research and development; had over 800 million internet users; and had 110 of the Global Fortune 500 companies. This is an Emerging Market economy with very different capabilities from most.

Outstanding economic resilience, particularly for macro-economic buffers. A recent Swiss Re Institute report gave China a score of 0.54 on its Economic Resilience Index. Notably, 0.54 is also its average score for “Advanced Economies”. Emerging Markets scored much lower at 0.47.

Among the MSCI Emerging Market economies, it has to be pointed out that South Korea and Chile scored higher overall than China. South Korea scored higher across most categories, but scored lower for fiscal and monetary policy “space”. Chile scored much higher than China for its low carbon economy, and perhaps controversially for “banking industry backdrop”, which Swiss Re notes is measured through a “WEF survey of executives indicating how sound a country’s banks are generally considered to be”. Significantly, the measure is not based on accounting or economic measures but “popular perceptions”. In short, it is subjective.

China topped the scores for all countries on fiscal space, which measures indicators such as real GDP growth; government debt to GDP; sovereign debt ratings; current account and primary balances; and FX reserves as months of imports. And China was ahead of every advanced economy for monetary “space”, and was near the top of the pack for Emerging Market economies, some of whom would have scored highly because their policy interest rates were very high. (This indicator looks at the “distance” of rates from the “zero bound”.)

We might also add that China stands out amongst Emerging Market economies in issuing debt overwhelmingly in its own currency. External debt to GDP is only around 14%, compared to 21% for India, 29% for Russia and 32% for Brazil, and one-third of that external debt is in Renminbi. Indeed, China is a net creditor nation. To be precise, it is the world’s largest creditor nation.

What’s happened since COVID-19? The growth and resilience gap between China and the rest of Emerging Markets could widen further as a result of COVID-19.

Swiss Re said: “The COVID-19 crisis will lead to a profound shift in economic resilience. Massive stimulus packages have cushioned the blow to the global economy, but at the expense of global resilience, which we estimate will fall by a fifth in 2020 from 2019 levels. Resilience in China will be stable, but there will be dramatic falls in other countries, with some seeing their resilience drop by more than half.”

How then to think about China in asset allocation strategies? The obvious as already suggested by MSCI is to treat China as investors have long treated the US and Japan – as a standalone segment. The suggestion of China being in some Asia ex-Japan index does not make much sense either. The problem then arises again of the index ending up a China-plus index. China is also currently around 40% of the MSCI Asia Pacific ex-Japan index.

Another possibility is to accept that China may be too big and complex to invest passively as a broad index. Parts of the Chinese economy may have more in common with the technologically advanced North-east Asian economies of South Korea, Taiwan and even Japan. Parts of the Chinese market – what we call “Old China” – may fit better into an Emerging Asia index, with similar themes of bricks and mortar infrastructure development, real estate, manufacturing and banking/finance. That approach would fit in well with Premia Partners’ differentiated, thematic approach to ETFs.

But no matter how investors eventually choose to treat China, it is becoming obvious that the old practice of lumping China indiscriminately with Emerging Markets will change. Indeed, it will eventually go.