The US-China trade dispute rumbled and concerns over global growth continued to mount in Q3. Factor-wise, Quality continued to outperform while Value is trailing, badly. Overall, the China A-shares ended roughly flat in Q3, and it was a meaningful quarter to the market with MSCI, FTSE, and S&P Dow Jones all made announcements of (further) inclusion of China A-shares into their benchmarks. Heading into Q4, we believe “Megatrends” continue to be the key investment themes and “Diversification” core to portfolio risk management. We don’t see a Value trap environment, but the comeback relies on many catalysts amid the current market uncertainties. Consolidation will happen as China rebalances to a “new normal”, and we believe Quality Growth is the best approach to capture domestic champions.

The Ferris wheel of factor rotation we’ve highlighted in our previous quarterly China A factor reviews continued in Q3 as investors entered the quarter with concerns of a slowdown in economic growth. In Q3 2019, Quality was the best performing factor while Value suffered a drawdown of almost 6%. 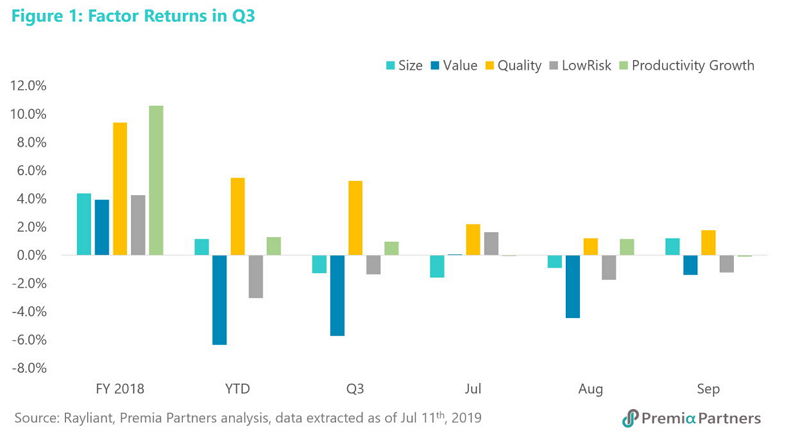 VALUE: THE TRAP OR THE UNDERDOG

While the classic Fama-French Value factor embraced by the legendary Warren Buffet has been proved to perform well in China A shares over the long-term history as per research from our senior advisor Dr. Jason Hsu* and his team, 2019 has been an extraordinary struggling year for many value investors.  In fact, the most recent value underperformance is one of the worst drawdowns over the last decade and possibly the entire A-shares history.  This was the first time that the CSI 300 Value Index underperformed the CSI 300 Growth Index in 3 consecutive quarters since 2009.  In Figure 2, we compared the ratio and excess returns of the CSI Value and Growth indexes. (Note: the CSI style indices only incepted from Oct 2009) 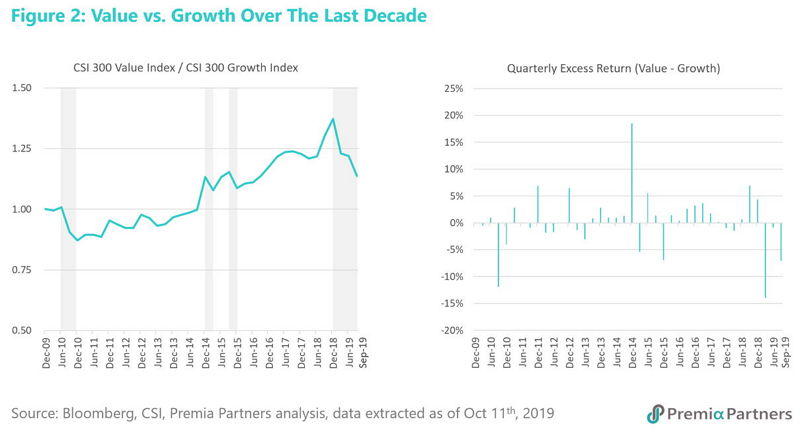 The current P/E of the CSI 300 index is slightly less than 14x, which is comparable to that during the Global Financial Crisis (GFC) period in 2008.  The CSI 300 Growth Index is currently at a rolling P/E of 18x, which is more than double of that of the CSI 300 Value Index (~8x).  Is China A shares in a Value trap, or is this Value vs. Growth underperformance set to revert?  We lean toward the latter.

In a typical Value trap environment, we would expect a greater deterioration in stock fundamentals than price deterioration such that there’s not sufficient underground for a bounce back but room for further price drop.  Despite ongoing concerns of trade dispute and growth slowdown, which are likely already reflected in the price deterioration to a certain extent, we have actually seen relatively steady fundamental earnings for China A shares stocks (Figure 3).  Even if one were to argue that the deterioration in earnings have yet all revealed, we don’t expect such to be more severe than the period post- GFC nor the crashed A-shares bubble in 2015. 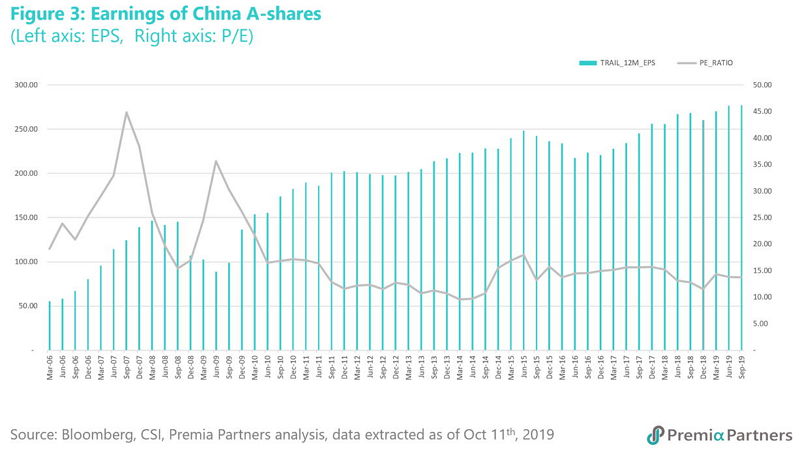 Will there be a mean-reversion? We think most likely yes. In spite of the current headwinds, long-term evidence and rationale for Value are substantial.  Although our profession often states that “historical performance does not reflect the future”, we do have confidence that, compared to the history and evidences in 2008-2009 and 2015-2016, the recent 3-quarter Value underperformance is beyond a normal range of variation and there’s opportunity to benefit from price dislocations. Therefore, the more important question is when and by how much.  One key contributor to the late preference of Growth over Value is the expectation of favourable monetary policies.  If the expectation is that rates will continue to decline, all else equal Value would possibly continue to underperform Growth for a while despite attractive fundamentals.

Among other possibilities, we think the following catalysts would contribute to the timeliness and extent of bounce back:

1.       Uncertainties of policies and geopolitical risks

·         The unstable and somewhat unpredictable trade tensions contributed to investors’ preference of mega-cap / headline growth names such as “Moutai” over the cheaper, economically sensitive stocks

·         In our recent research discussion, Dr. Jason Hsu* mentioned that “if interest rate stays ‘abnormally’ low as a result of central bank interference, Growth will no longer be favoured over Value once the low rate environment is already priced in… However, if the low rate regime does persist the historical pattern of Value underperformance followed by Value outperformance, may not come true soon this time.”

3.       Growth stabilization or a full-blown recession

·         The PRC government has long been steering the tone of growth objective from “high” to “mid-high”.  China’s growth rate has been slower, but it is still among the fastest around the world.  The current preference of scarce growth stocks over value could have overstated the expectation of economic slowdown and extent of monetary easing into the China A-shares

The onshore China A shares has performed very well year-to-date (Figure 4), leading globally including the US market which many investors remain overweight positions.  With the index inclusion exercises and increasing international flows, the onshore market has also significantly outperformed its offshore peers.  The international appetite so far appeared to be directed more toward quality, growth and new economy leaders despite the appeal of attractive valuation for value stocks.  The new economy sectors performed better than broad mainstream beta or mega-cap strategies and is continuing a strong mean-reversion trajectory since the beginning of this year.  As of end of Q3, our Premia CSI Caixin China New Economy ETF (3173 HK), which has a Quality tilt on broader new economy sector universe, is among the best performing A-shares ETFs with nearly 30% in USD YTD total return.  On the other hand, our China Bedrock Economy ETF suffered from active Value exposure in its multifactor design but still saw 11% USD total return YTD. 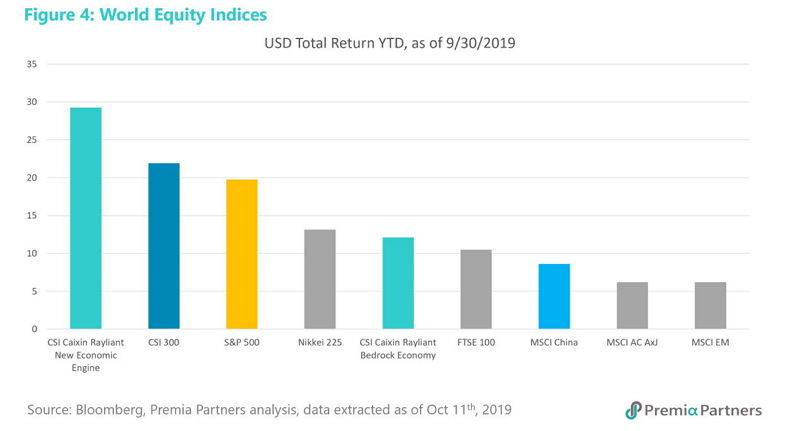 Heading into the last quarter of 2019, we see “Megatrends” continue to be the key investment theme and “Diversification” core to portfolio risk management:

·         As the Chinese economy rebalances to a new normal, new economy sectors will continue to benefit from the megatrends of domestic consumption, aging population, digital transformation and 5G/Internet-of-Things-related high-end industrials.

·         Within “Megatrend” themes, we expect to see consolidation and stronger emergence of domestic champions as the economy reconfigures toward a slower growth equilibrium; therefore, a broad sector-based growth strategy may become risky, especially as many of the tail companies are becoming too expensive

·         The valuation debacle around WeWork IPO is a wakeup call that there are no bad assets, but bad prices.  At some point the market will retrieve rationality and start to question the dislocation between fundamentals and aspirational valuation.

·         Lastly, the recent Value drawdown is a reminder that portfolios should be balanced and diversified across factors and sectors.

For value investors, we believe your patience will pay off but do diversify across sources of returns in the long-term as all factor premiums are cyclical and a multifactor strategy could also come handy.  For growth investors, we continue to advocate a quality growth approach over expensive pure growth strategies (e.g. ChiNext) to capture the leaders in the new economy megatrends.  And for global allocators with China exposure, a tactical value play opportunity also exists to complement your existing broad-based beta exposure as we see the value factor an underdog that will mount to comeback.

*Our Senior Advisor Dr. Jason Hsu is the Chairman & CIO of Rayliant Global Advisors. He is also the Senior Advisor, Co-founder and former Vice Chairman of Research Affiliates.