Premia CSI Caixin China New Economy ETF performed well and went up by 3% in a down market. In this article, we would like to share with you the reasons behind the strong performance and the comparison of this strategy with the other mainstream indexes that investors usually track in respect to performance attribution, sector allocation, niche thematic exposure and top drivers.

The spreading of COVID-19 and the subsequent lockdowns worldwide led to a sell-off in all risky assets across equities, currencies, credits and crude oil, creating a panic that some observers even compared the current situation with the market collapses in Great Depression a century ago or in Great Financial Crisis a decade ago.  It may be hard to believe that there is a long-only strategy offering a positive return year-to-date while every single major market is down by 10% to 30%.  Well, maybe investors have overlooked Premia CSI Caixin China New Economy ETF, which managed to go up by 3% this year on top of its stellar performance in 2019.

There are a few probable reasons explaining why the overall China-A has been doing relatively well with lower volatility compared to the rest of the world. 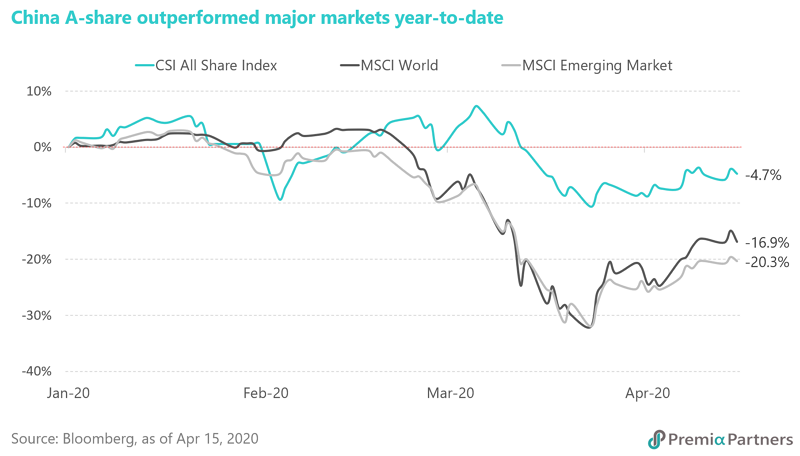 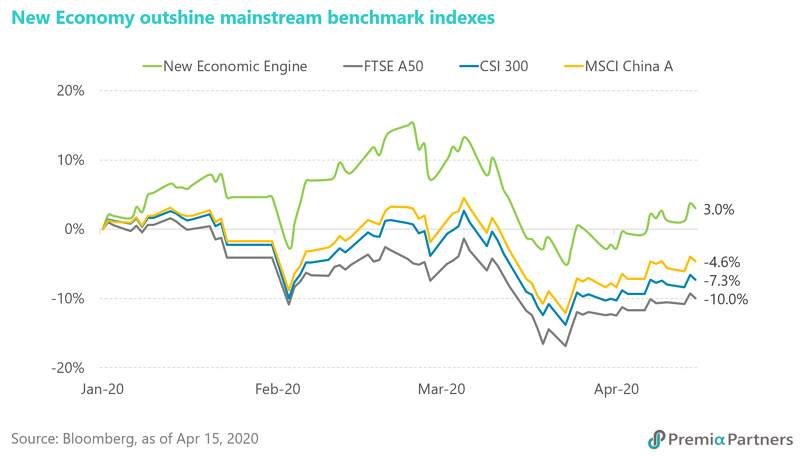 The concept of new economy is well received by the investors who observe that  China will be continue its structural change of its economic model.  By riding on the megatrends of domestic consumption, urbanization, technology enablement, rising healthcare needs and the silver economy, companies operating in these different domains will enjoy faster growth.  In fact, the occurrence of COVID-19 did accelerate the digital transformation and highlight the importance of how new technology and application can change our daily lives.  For example, everyone simply went for online video streaming and gaming for entertainment in the past few months, leading to service providers adding more server capacity to cope with the rising data traffic.  E-commerce also did well with online physical sales rising by 3% compared to the total retail sales which fell by 24% in the first two months this year.  Interestingly, new user behaviors are formed with customers getting more used to buying fresh food and vegetable products online.  Other than shopping, people also become more familiar with remote working and schooling, such as hosting cloud conferences to replace the usual meetings or taking webinars instead of attending seminars.

Sector-wise, New Economic Engine is tilted towards the health care, information technology, and consumer discretionary, which has a combined weighting of 71.6%, much higher than 19.9% in FTSE A50, 27.3% in CSI 300, and 29.2% in MSCI China A.  On the flip side, it has a negligible weighting in the traditional/old economy such as energy, utilities, financial, and real estate.  It is probably the right approach for certain investors not to hold any Chinese banks at all on the back of their long-term downtrend in both return on equity and net interest margin.  There is a chance that the banking industry will have to sacrifice their earnings by providing low-cost funding and liquidity to help stabilize the economy in the short-term.

Coincidently, New Economic Engine also taps into a few timely themes and niche exposures including cloud, AI, 5G, semiconductor, interactive home entertainment, biotech, life science, pharmaceutical and industry 4.0 that may outperform the market amid the COVID-19 pandemic.  Please refer to our recent article #NewInfrastructure, written by Rainie Pan and Vicky Hsu, if you are interested to drill down into these innovative areas with more details and understand more about the specific leading names.

Exhibit 3: Investors should focus on the sectors that benefit from the structural change 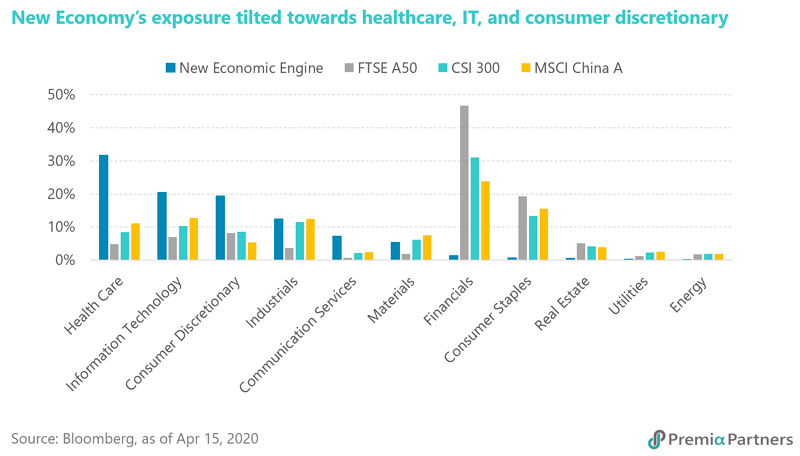 Exhibit 4: Both NIM and ROE of Chinse banks are in long-term downtrend 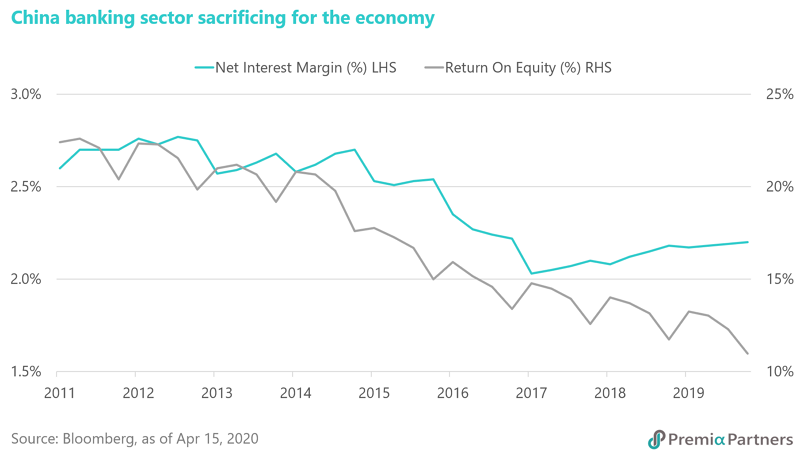 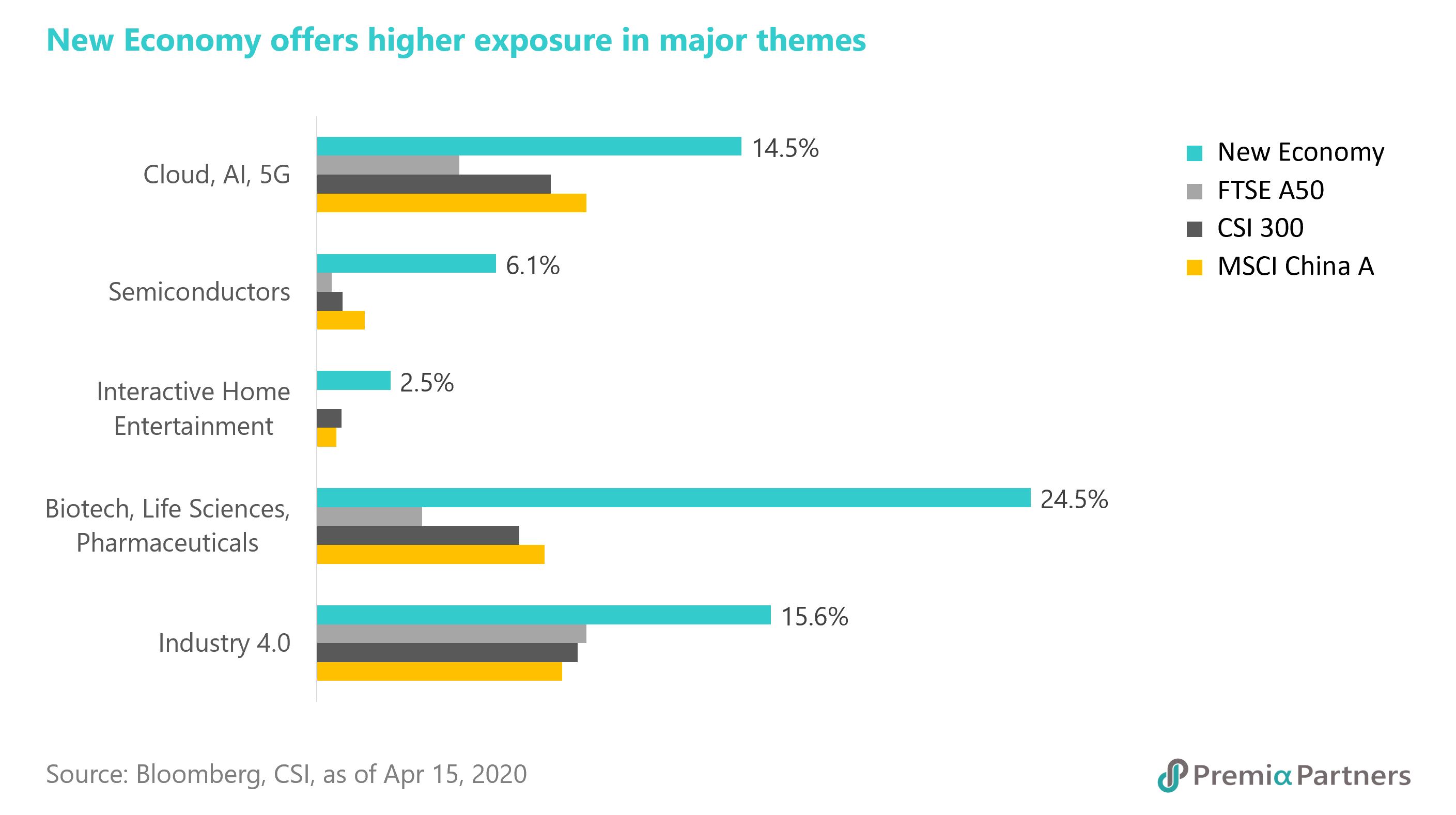 When deep-diving into the performance attribution of New Economic Engine versus FTSE A50, CSI 300 and MSCI China A, we can see that roughly two-thirds of New Economic Engine’s strong performance came from the allocation effect and one-third was driven by the selection effect.  In sector exposure, the strategy did particularly well by overweighting healthcare and underweighting financials, although the minimal position in consumer staples dragged down the outperformance slightly.  In stock picking, the smart beta approach essentially helped generate the alpha performance in industrials and information technology.  The outstanding selection effect maybe partly attributable to the strict financial health criteria and growth tilting.

For some investors that are not closely following China-A, the top 10 contributors of the strategy may also look quite unfamiliar.  In fact, most of them are the leaders in their innovative sub-segments including battery solutions, oncology drugs, medical devices, cloud computing, and fingerprint chips, etc.  For example, Guangzhou Wondfo is a Shenzhen-listed company which is not included in FTSE A50, CSI 300 or MSCI China A, but it is a fast-growing leader in rapid diagnostic field.  Its newly developed SARS-CoV-2 antibody test was one of the first products to get approved in Europe earlier this year.  If one believes in the progression of the China economy and is eager to tap into the future growth, these names are the more likely candidates than the usual stocks getting frequently traded simply for the sake of China exposure. 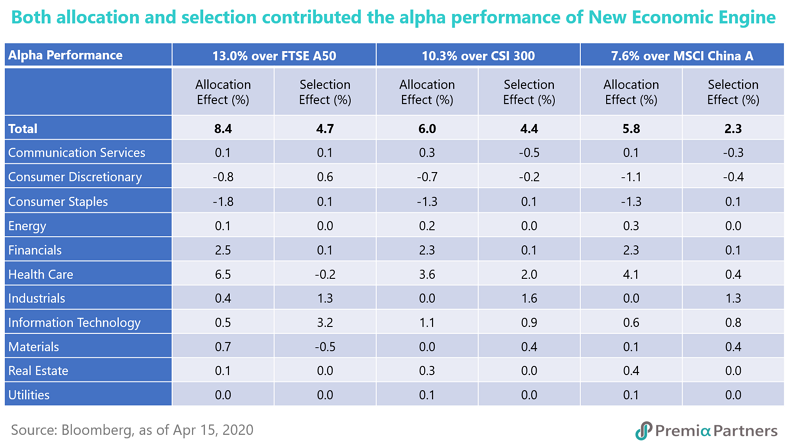 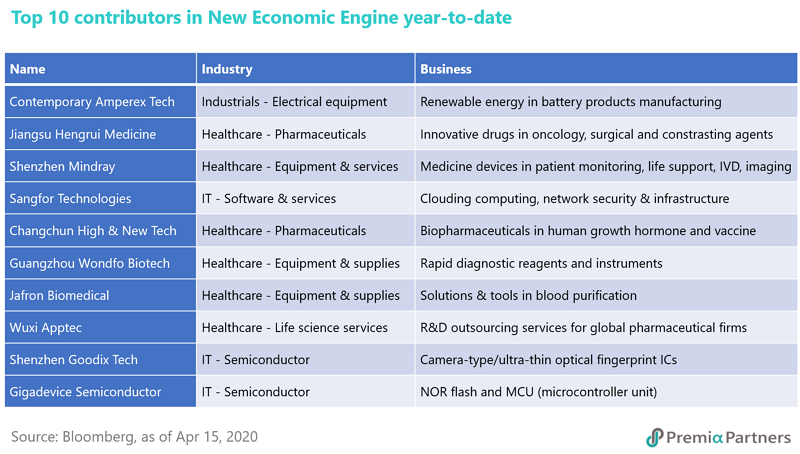 Last not but least, investors should be mindful that it is possible for a V-shaped rebound in the stock market, but it may take longer  for the real economy to heal after the lockdown everywhere.  One of the potential consequences could be  worsening credit conditions.  Fortunately, the latest quarterly data showed that the defaults in China domestic bonds stayed under control, reflecting no imminent credit crunch in the system.  However, it is always good to have a buffer to prepare for the worst in uncertain times.  The average total debt to equity ratio of New Economic Engine’s constituents is 26.5%, substantially lower than 173.2% in FTSE A50, 142.9% in CSI 300, or 122.8% in MSCI China A.  With a stronger financial position and lighter leverage, New Economic Engine’s companies should be more flexible in adjusting their business models and thrive in a challenging environment. 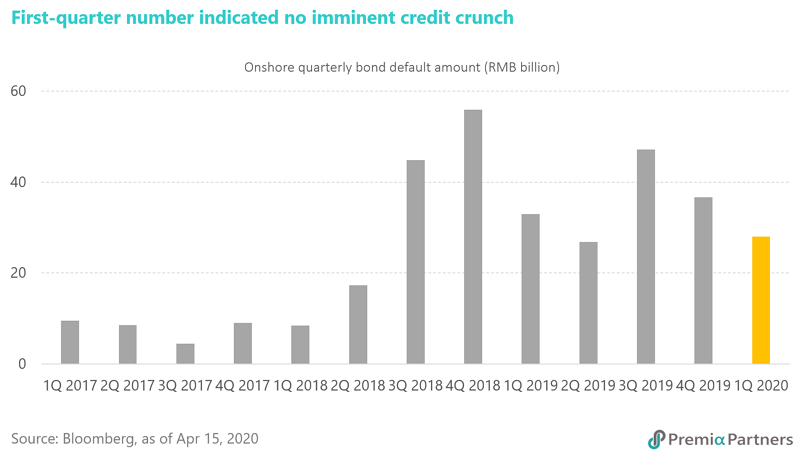