Outperformer from first news of successful vaccines. Emerging ASEAN has been one of the best performers among major global equity indices since the start of November. And that was likely due to the region’s high economic leverage to normalisation after the distribution of COVID-19 vaccines and its high trend GDP growth rates relative to other Emerging Market economies.

Outperformer from first news of successful vaccines. Emerging ASEAN has been one of the best performers among major global equity indices since the start of November (figure 1). That was likely due to the region’s high economic leverage to normalisation after the distribution of COVID-19 vaccines and its high trend GDP growth rates relative to other Emerging Market economies. 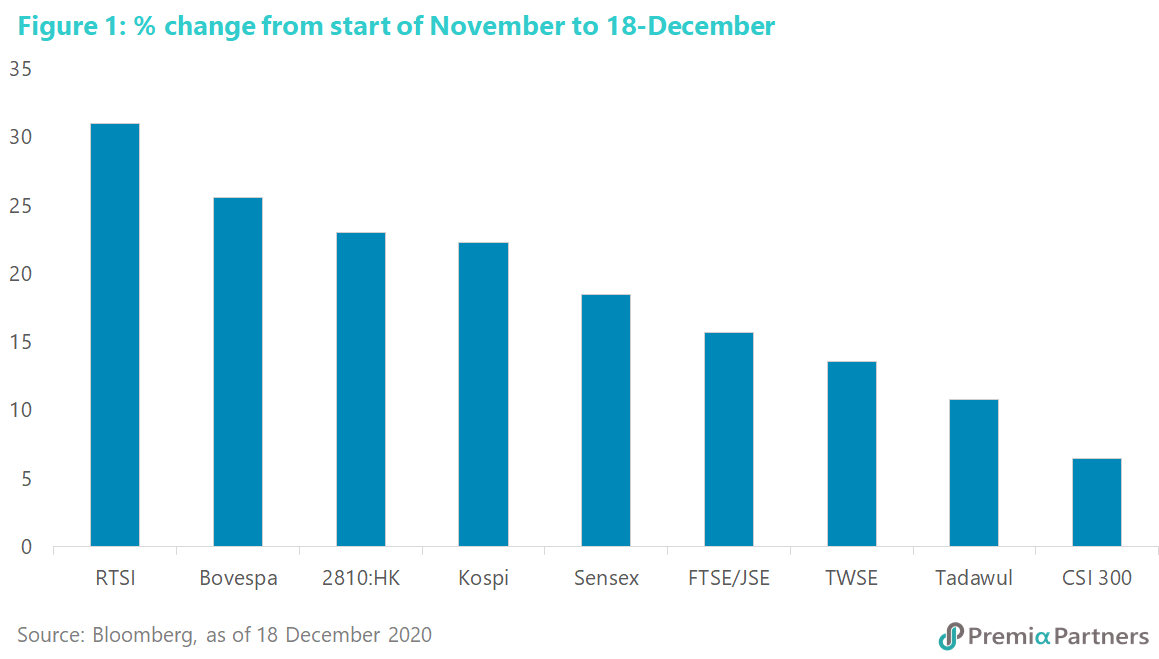 It’s not just about valuations. Valuations are mixed relative to other emerging markets, with some markets cheaper on some measures than others, and valuations advantages/disadvantages offset by different quality characteristics such as returns on equity, operating profit margins, and debt-to-equity ratios. That is as you would expect in a diverse region such as Emerging ASEAN. Yet, even collectively, it is difficult to see clear valuation drivers for this outperformance – it’s a mixed picture. Yet, what you can say with confidence is that valuations are reasonable.

The big driver – markets are looking towards the gains from normalisation of economic activity, post-pandemic. Looking to 2021, Emerging ASEAN could be among the biggest economic beneficiaries of the eventual rollout of vaccines in the world. On the basis of IMF estimates for GDP growth for 2020 versus our estimate of trend growth, we found that the Philippines, Malaysia and Thailand could have the greatest gains in terms of GDP growth catch-up on normalisation to trend growth, amongst the MSCI Emerging Market countries (figure 2).

South Africa scores highly on economic gains on normalisation. However, that has to be viewed in the light of its low trend growth rate. That is, its gains on normalisation are off deep contraction, raising the question of what it does for an encore after normalisation. For Russia, the problem is that nearly half of the stock market is energy-related. While it will do well on what we expect to be continued recovery in crude oil prices, it is arguable whether investors might prefer exposure to oil prices through the oil majors or via the RTSI. There is very little diversification in the MSCI Russia Index, compared to a quite diverse Emerging ASEAN. 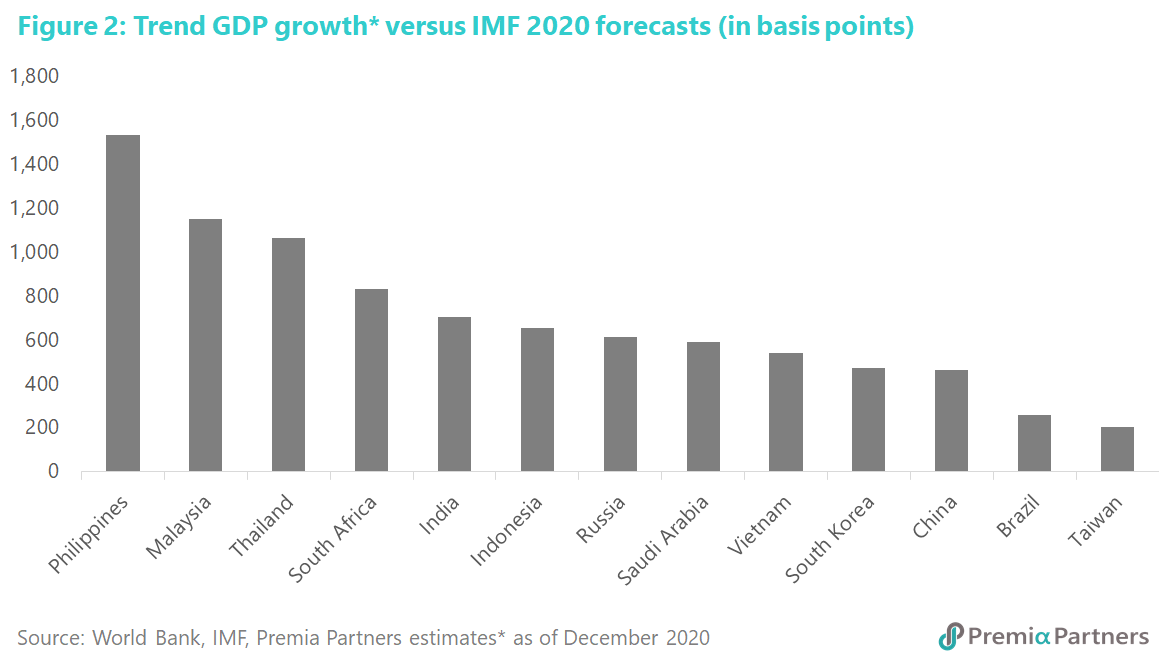 Vaccine roll out still lacking visibility in ASEAN but economic rebounds are still likely. The information on vaccine acquisition and roll out has been patchy in ASEAN, sometimes contradictory. Some announcements have been at a high level, with few details on roll out timelines. As the year moves on, there may be moments when vaccine doubts creep in, causing corrections in markets. Nonetheless, markets tend to be forward looking; there is a lot of stimulus globally and at the national level within ASEAN; and there is likely to be an economic rebound anyway, as a result of restocking and earlier reopening in the Developed Markets, even if social movement controls continue within ASEAN.

An economic rebound in ASEAN, notwithstanding ongoing movement controls. IMF GDP growth forecasts for Emerging ASEAN are some of the strongest in the world. Note that the IMF’s growth forecasts for 2021 assume continuation of social distancing and other restrictions – they do not assume communities with herd immunity.

Of the major economies, Emerging ASEAN forecast growth rates for 2021 are only exceeded by India and China. Indeed, China’s forecast of 8.2% GDP growth rate for 2021 will be a major driver of ASEAN’s economic rebound.

Robust commodity prices, as reflected in the 37% gain in the Lyxor Commodities Thomson Reuters/CoreCommodity CRB, will also help with economic and market sentiment in ASEAN, particularly for Indonesia, Malaysia and even Thailand (where energy accounts for 16% of the MSCI Thailand).

Vietnam – a global demand recovery story. Like China, Vietnam has been one of the exceptional few countries to have successfully managed the pandemic to allow a higher level of movement and economic activity. Its success in pandemic management has led to it being seen as having less “catch-up” potential on normalisation post-pandemic than the other Emerging ASEAN economies, particularly Malaysia, Indonesia and the Philippines.

However, that does not consider its “catch-up” potential from recovery in global demand, trade and manufacturing. The IMF was last expecting 6.7% GDP growth for Vietnam in 2021.  This may be conservative, given our estimate of its trend growth of 7%. Given how repressed global demand has been due to the pandemic, a recovery of global demand, international trade and manufacturing could drive an overshoot of the trend growth of 7%. Note that Vietnam was one of the few countries in the world to record export growth for the year-to-date 2020. According to IHS Markit, exports are estimated to have risen by 4.7% y/y for the first ten months of this year, while imports rose by 0.4%, resulting in a strong trade surplus for the first ten months of USD 18.7 billion. Indeed, in 3Q20, Vietnam’s export growth of 10.9% y/y was even higher than China’s 8.8% y/y growth.

Vietnamese corporate earnings growth appears to have stabilised by 3Q20, with the rate of decline for companies listed on the Ho Chi Minh Stock Exchange easing to 5.9% y/y. Yet, earnings for companies on the VN30 grew 1.6% y/y and earnings of small cap stocks spiked by around 29% y/y.  The MSCI Vietnam PE on trailing twelve-months earnings is reasonable at around 20x, on par with Indonesia and the Philippines, but more attractive than Malaysia’s 23x and Thailand’s 24x.

Beyond normalisation from the pandemic, the market might refocus on the long-term fundamental strengths of the Vietnamese economy, which is neatly summed up by IHS Markit as follows: “Over the medium-term outlook for the next five years, a number of key drivers are expected to make Vietnam one of the fastest growing emerging markets in the Asian region. 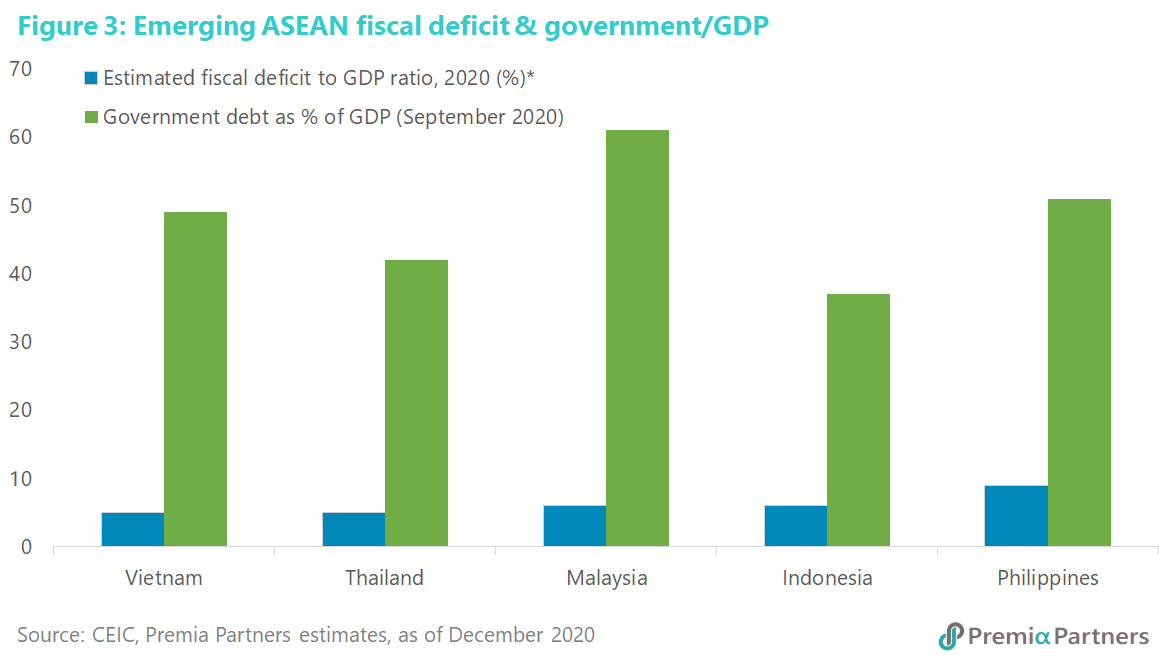