Nasdaq has made new highs and investors are understandably excited. Similarly, here in Asia we have seen innovative technology companies outperform YTD but with much less fanfare. David Lai explores the major megatrends in Asia and why you need to invest in tech leaders across this region.

Nasdaq is making new highs lately as investors resumed their faith in innovation and technology remaining core to future growth.  If you hold the same belief and do not want to miss the opportunity in Asia Pacific, then you must look for instruments to get exposure to Asian Innovative Tech stocks.  Our Premia Asia Innovative Technology ETF (3181.HK) – we’ll call it AIT for short going forward – is doing equally well vs Nasdaq, with a gain of 22.63% year-to-date.  For readers who are not familiar with the definition of AIT – this fund aims to capture Asian innovation megatrends including digital transformation, healthcare innovation, and robotics & automation.  It invests in technology-enabled innovation leaders in Asia through revenue-based company selection in partnership between Premia and FactSet. (please click here for the objectives and strategies of the fund.)  While the topic is logical enough, I’d like to update a few key developments behind these megatrends that highlight how important AIT should be to client portfolios. 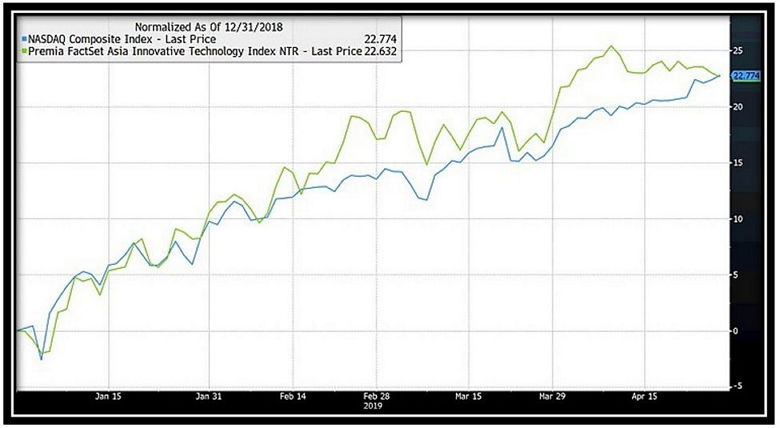 5G mobile network launched
South Korea just launched the world’s first commercial 5G mobile network in early April, beating the US, Japan and China alongside the 5G-enabled version of the Samsung Galaxy S10.  5G telecom networks will make the world more connected on a real-time basis, which facilitates e-commerce transactions and is crucial for the future development of devices including autonomous driving, factory automation and Internet of Things.  Essentially telecom and internet companies need to increase their capex to set up new infrastructure, while smartphones, autos and various consumer electronics should be significantly upgraded with lots of chips and components.  This should lead to a shift in tech demand from a standalone device and commodity components to more connected and value-added enterprise solutions such as cloud and datacenter.  Global data traffic will easily go up a few times with faster connection, so equipment and component suppliers could reap the benefit of the 5G boom over the next 5-10 years.  Profound long-term potential disruptions include an edge computing and scope to power industrial automation on the back of high reliability and low latency.

With Korea, Japan and China having ambitious 5G rollout targets these few years, it is likely that most Asian ecosystem companies will benefit from this investment cycle in near term.  In the semiconductor space, TSMC's leading position and market share gain in advanced nodes to deal with data-centric demand like High-Performance-Computation would be the most obvious winner, whilst other players like MediaTek and SK Hynix should also be key beneficiaries of 5G theme.  On network equipment, Huawei, ZTE and Samsung Electronics would be amongst the preferred partners for 5G trial service and R&D co-development with telecom carriers across the world.  On the component front, Largan Precision and Sunny Optical with continuous spec upgrades in optics and Murata Manufacturing, the technological leader in multi-ceramic capacitors and surface acoustic wave employed in wireless communications, are likely to be the key beneficiaries.  Along the supply chain, Delta Electronics and Sunway Communication will be able to get good order pipelines in telecom power system supply and mobile terminal antenna.  Most of these are in our AIT strategy, accessible in a single trade on HKEx (3181.HK). 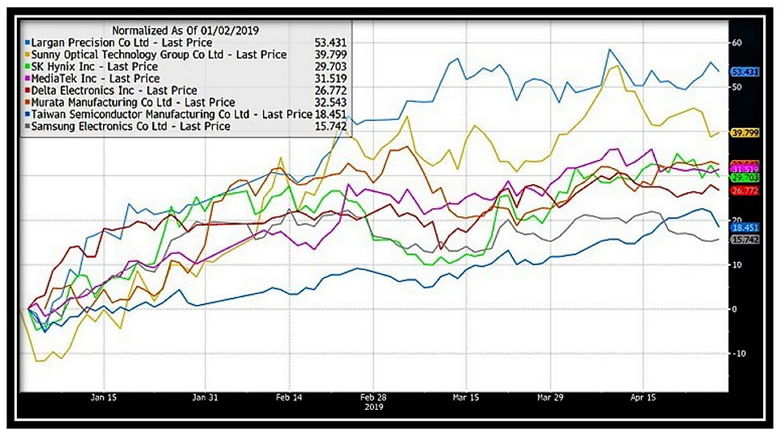 Extensive application of 5G for consumer and corporate (Source: HSBC, 11/2/2019) 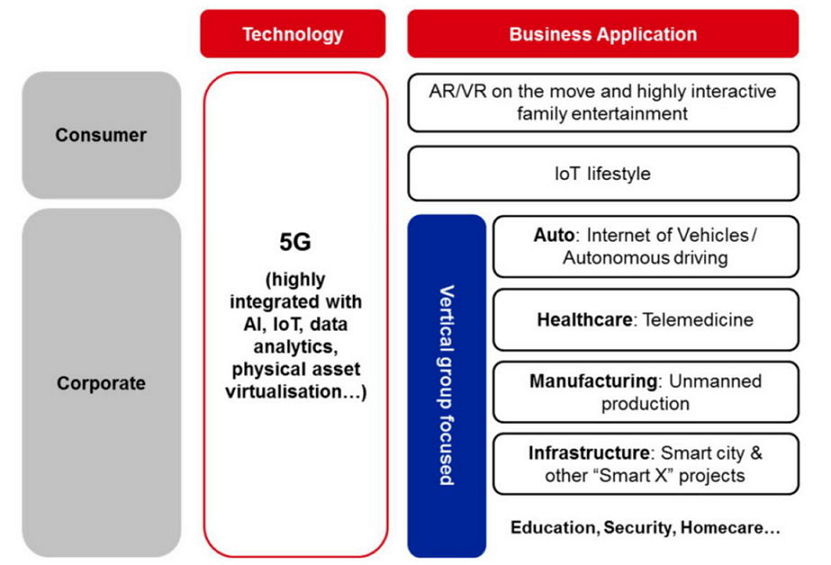 Digital silk road: a new model of Belt & Road Initiative
Heads of state and government from 37 countries and other representatives from over 150 countries just took part in the second Belt and Road Forum for International Cooperation in Beijing in late April.  Market was quite bearish over the future of Belt & Road Initiative (BRI) after a few countries had suspended, scaled back, terminated or experienced backlash for the involvement in the program in the past couple of years.  Interestingly Mahathir Mohamad reversed his skeptical stance recently by approving a revised version of the East Coast Railway Link and even welcomed a new project to create an artificial intelligence (AI) hub in Malaysia with the help of Chinese AI unicorn SenseTime.  The cooperation will cover technology for national security, facial-recognition surveillance, immigration, border security, and education.  The AI park, which will be built over five years by China Communications Construction Group, is aiming to help local tech businesses to develop robots and speech recognition, and foster tech talents.  Seems Chinese government is reinventing a new strategy of BRI, transforming the traditional brick & mortar model into a digital silk road by offering a package of technology transfer.  China will be able to provide assistance in frontier areas such as digital economy, AI, nanotechnology and quantum computing, and advance the development of big data, cloud computing and smart cities.

Investors may notice that China tech giants have been giving a big push in digital silk road by heavily investing in Southeast Asia’s startups and e-commerce firms.  For example, Alibaba operates the Singapore-based e-commerce firm Lazada Group, which counts the highest number of monthly active users in Thailand, Malaysia, The Philippines, and Vietnam.  Tencent invested in Singapore-based Sea, which operates the Shopee e-commerce site and Garena gaming and esports platform, while JD.com led an investment round into Thai online fashion brand Pomelo.  On ride-hailing services, Tencent, JD.com, Meituan Dianpi and Didi Chuxing have invested in the regional operators like Grab and Go-Jek, which basically push Uber out of the market in Southeast Asia.  On e-payment side, both Alipay and Wechat Pay have recently entered into Cambodia, Laos, the Philippines, and Myanmar to initially serve Chinese tourists, with previous launches in Singapore, Malaysia, Thailand, and Vietnam.  Ant Financial has expanded its presence in Southeast Asia’s tech space through an aggressive mix of merger and acquisitions and partnerships, notably in Thailand with Ascend Money, in Indonesia with Emtek, and most recently in the Philippines with Mynt. 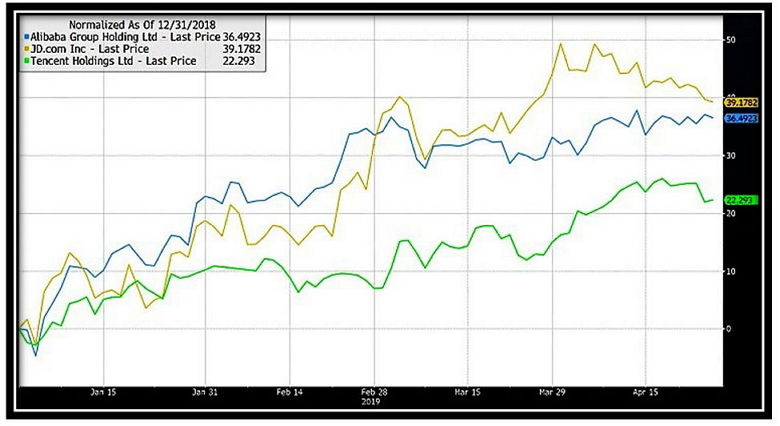 Robotics to cope with declining working-age population
Based on the latest figures from Ministry of Internal Affairs in Japan, the nation’s natural population fell by 430,000 in 2018, which is among the fastest decline in the world.  Korea is projected to follow similar trajectory to record a decline as early as next year.  The outlook looks even grimmer if looking at the age group of 15 to 74, which is essentially a broader-defined working-age population.  These groups are estimated to be reduced by 30% in Japan, 26% in Korea, and 19% in China from 2020 to 2060.  Robots replacing human workforce is no longer a storyline in futuristic fiction but becoming a realistic solution across different industries in Asia.  Humanoid social robots, like Softbank’s “Pepper” are being promoted as social partners for Japan’s aging population, as well as people in need of a friend.  Robots had been introduced to operate the front desk at Henn-Na Hotel Group in Tokyo, but over a hundred of them were culled because they created work rather than reduced it following numerous complaints from staff and customers.  Understandably it may take time for robots being widely used in services industry, instead we do see an initial success for robots in manufacturing/industrial space. 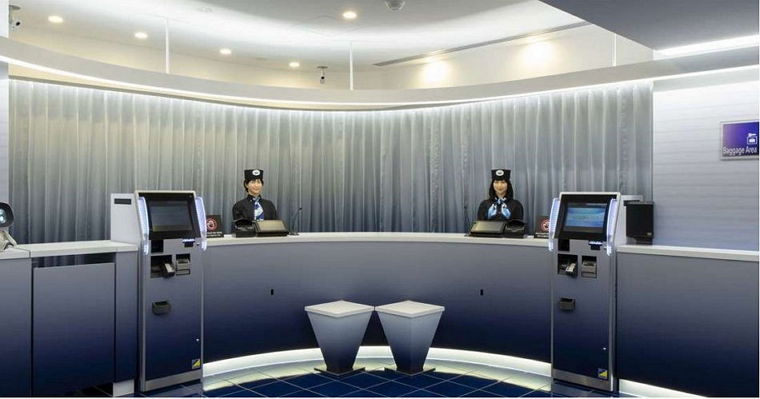 Industrial automation is already streamlining the manufacturing process, but first those machines must be painstakingly trained by skilled engineers.  Fanuc wants to make robots easier to train, therefore making automation more accessible to a wider range of industries.  The company recently announced a new artificial intelligence-based tool that teaches robots how to pick the right objects out of a bin with simple annotations and sensor technology, reducing the training process by hours.  It simplifies the training so that human operator just needs to look at a photo of parts jumbled in a bin on a screen and tap a few examples of what needs to be picked up, like showing a small child how to sort toys.  This is significantly less training than what typical AI-based vision sensors need and can also be used to train several robots at once.  Simultaneously, Keyence also launched a new platform that merges machine learning with data analytics for factory automation.  The new tool performs data cleansing and file integration, using the machine-learning function to identify critical data and decision points in natural language.  Quantifying the impact of decisions before they are executed will allow users to make rational and productive management decisions.  The new product will allow Keyence to expand its application not only beyond the factory automation and general manufacturing fields to include marketing and business planning in terms of function, but also covering food, pharmaceutical in additional to the traditional automobile and electronics in terms of industry. 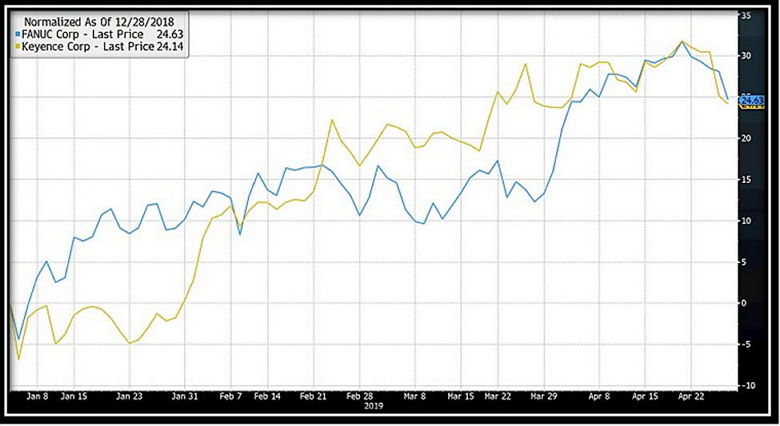 All of the underlined companies listed in the paragraphs above are some of the holdings of the Premia Asia Innovative Technology ETF (3181.HK).  It is the only way to get exposure to all these Asian innovation leaders in a single trade.  Please refer to the details here.

Green economy
寻找成长赛道：驱动生产力爆发的亚洲创新科技
[WORKING PAPER] Equity Duration: What cease to hold and what still does? – Relative Perspectives on China vs. the US and the New vs. the Old
AC/BC - Four things that will never be the same again
What’s the impact from the recent rebalancing for our China Bedrock, New Economy, and Asia Innovative Technology ETFs?