Amidst the high risk of holding Developed Market government bonds and credits in an environment of rising inflation and historically low spreads, a frequent lament among institutions and large family offices is “but our mandate requires us to hold bonds.”

Set in this context, it is significant that international pension funds have been reported to be buying China Government Bonds (CGBs) in growing volumes in recent months – possibly as an alternative to Developed Market bonds. This is reflected in the acceleration in foreign holdings of Chinese bonds (figure 1).

In April, when a very minor dip in holdings was reported for March compared to February, the media headlines said foreign buying of Chinese bonds had “stalled”, and foreigners had “cut” their holdings. Yet, foreign holdings have since continued to grow. 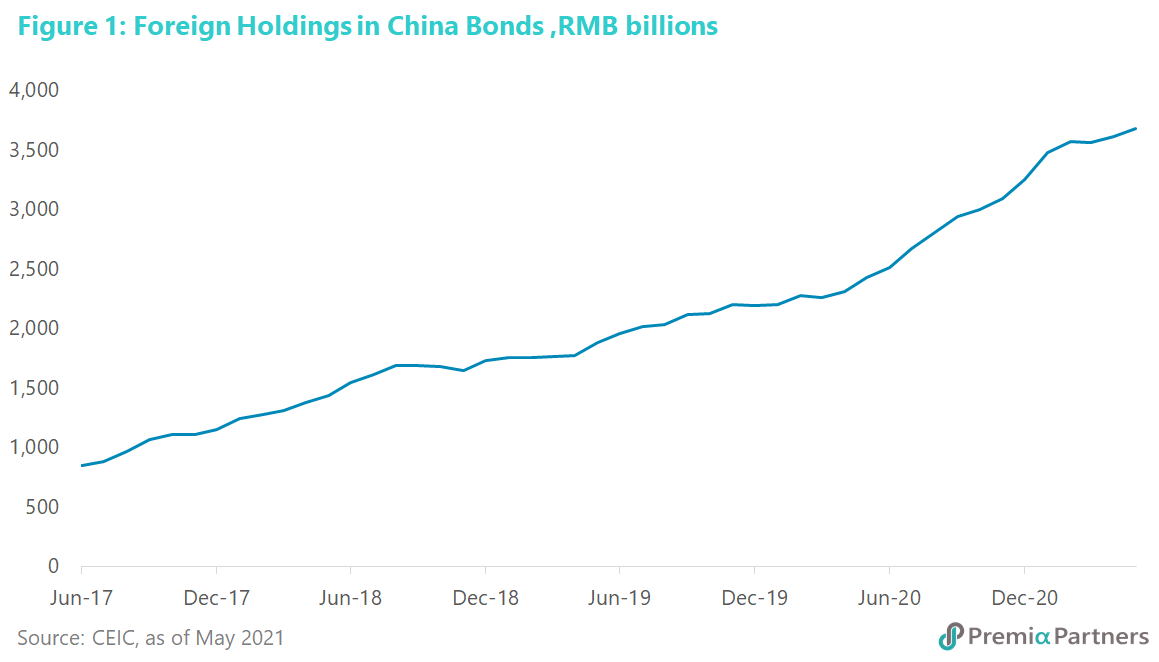 Here are five factors supportive of continued flow of international money into CGBs.

1)    Stability relative to US Treasuries. USTs have been on a roller coaster since the start of last year, as extreme quantitative easing drove down yields, and then fear of inflation drove them back up again. Bonds are supposed to be boring, remember? To borrow loosely from Oscar Wilde, it is better to have stable fixed income than to be “fascinating”. Compare the wild ride on the 10Y UST with the stable path of the 10Y CGB (figure 2).

At the heart of this has been the divergence in policy management of the crisis of the past 15 months between China and the United States. China “let rip” with administrative tools to bring the pandemic under control, thereby reducing the need for monetary stimulus. The US “let the pandemic rip”, thereby blowing out its need for monetary stimulus. This is reflected in the 31% growth in US M2 money supply between January 2020 and April 2021 versus 12% in China for the same period (figure 3). 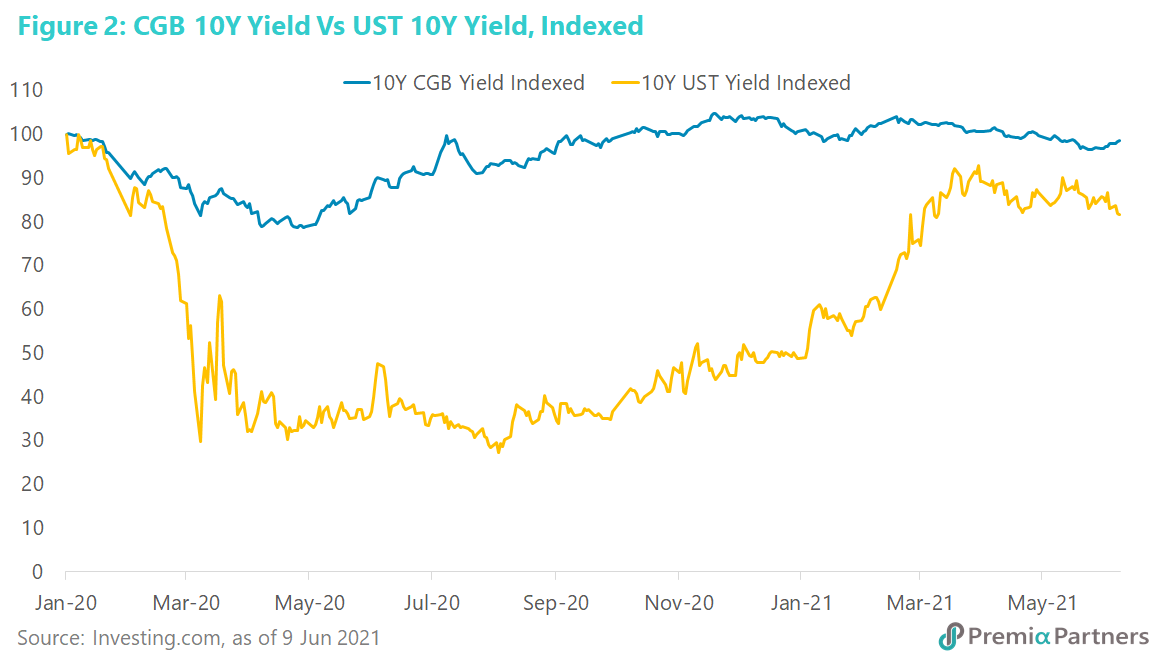 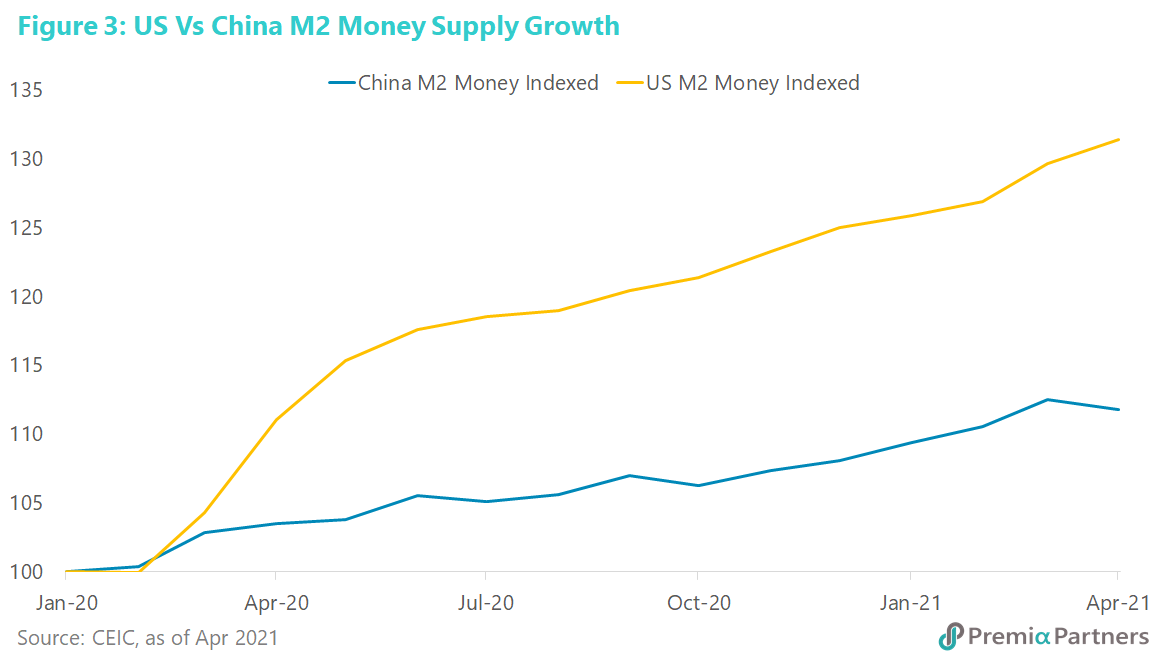 2)    Less threatening inflation outlook. The latest US annual inflation rate for “all urban consumers” as compiled by the Bureau of Labor Statistics has blown out further from 4.2% in April to 5.0% in May. This is the highest reading since August of 2008. China’s inflation, at an annual rate of 1.3% for May, has so far been moderate compared to the US and even the Euro Area (figure 4).

There has been a lot of talk about whether US inflation is “transitory”, as US Treasury Secretary Janet Yellen believes. But even Ms. Yellen seems to be preparing the ground for uncomfortable numbers to come. She recently said she expected “high annual rates of inflation through the end of this year.” So far, Fed asset purchases have kept the 10-year US Treasury yield subdued in recent weeks. However, it will become more difficult for the bond market to stay calm if inflation spikes yet higher at the same time as the Fed starts to taper its asset purchases. 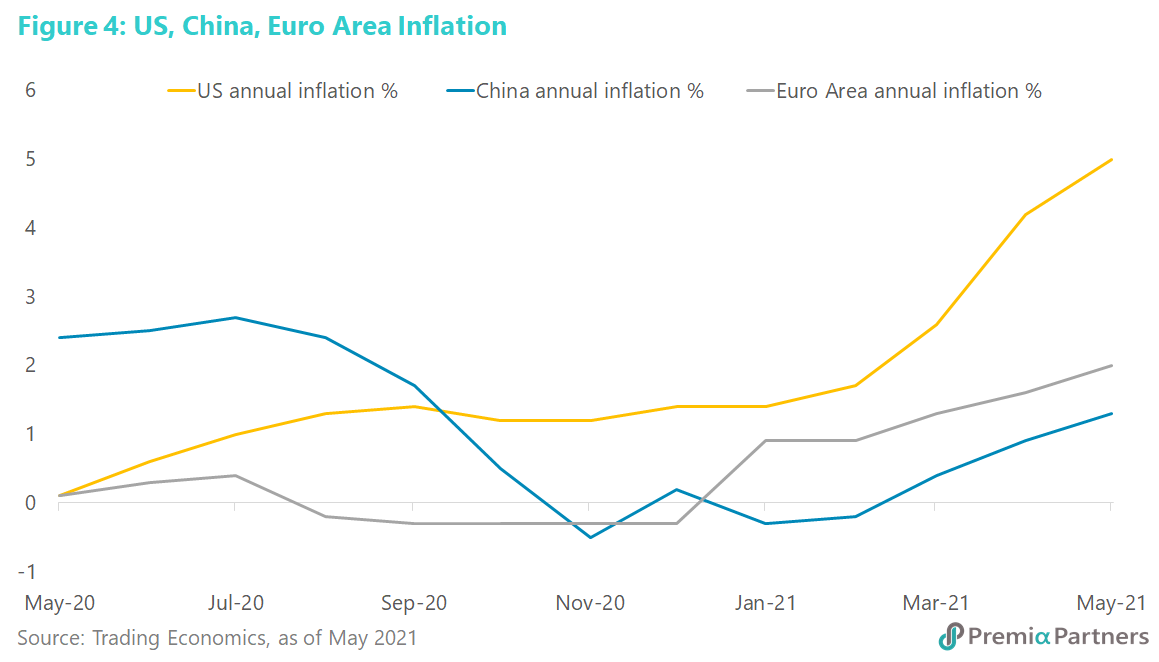 3)    Attractive relative value. The 10-year China Government Bond is currently yielding around 3.15%. That’s a spread of around 169 basis points over the 10-year UST. The Chinese Government has a sovereign credit rating of A+ on Standard & Poor’s system.

However, they have “extra yield” over the 10-year Bund, as the media describes it. Well, for starters, the 10-year Bund is yielding -0.27%. And if “extra yield’ is the pursuit, the 10-year China Government Bond is offering a spread of over 340 basis points at the moment. This is of course largely academic as Italian and Greek government bonds have little logic – beyond ECB buying support – and little support among Asian investors.

In corporate credits, a very broad comparison may be against the Bank of America BB High Yield Index Effective Yield, which is currently 3.28%. Of course, there are many different offerings, maturities and yields in high yield credits – some paying more. The question then is whether an A+ sovereign bond or a US high yield credit offers a better risk-adjusted return for investors.

4)    Better fiscal management, lower government debt. The US Government has a Standard and Poor’s rating of AA+, presumably in part on the so-called “exorbitant privilege” of its debt being denominated in the leading reserve currency. Although this rating puts it a bit ahead of China, it is worth noting that the US Government has a history of running larger fiscal deficits than China (figure 5). According to International Monetary Fund calculations, the US has a much larger gross debt to GDP figure of 127% for 2020, compared to China’s 67% (figure 6). 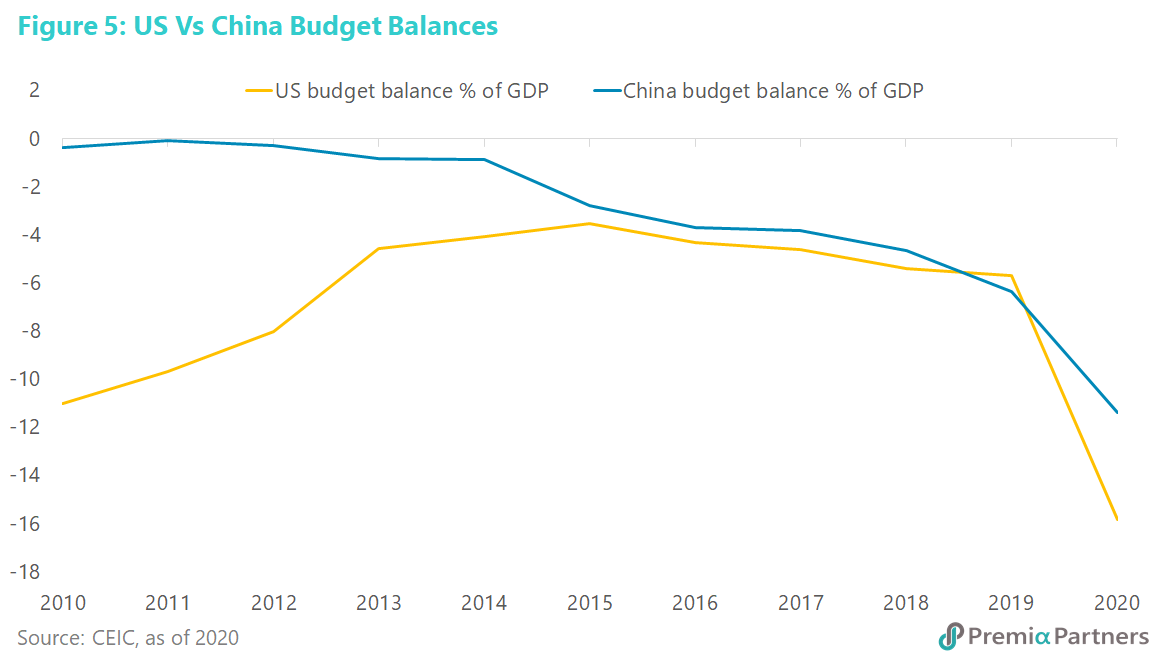 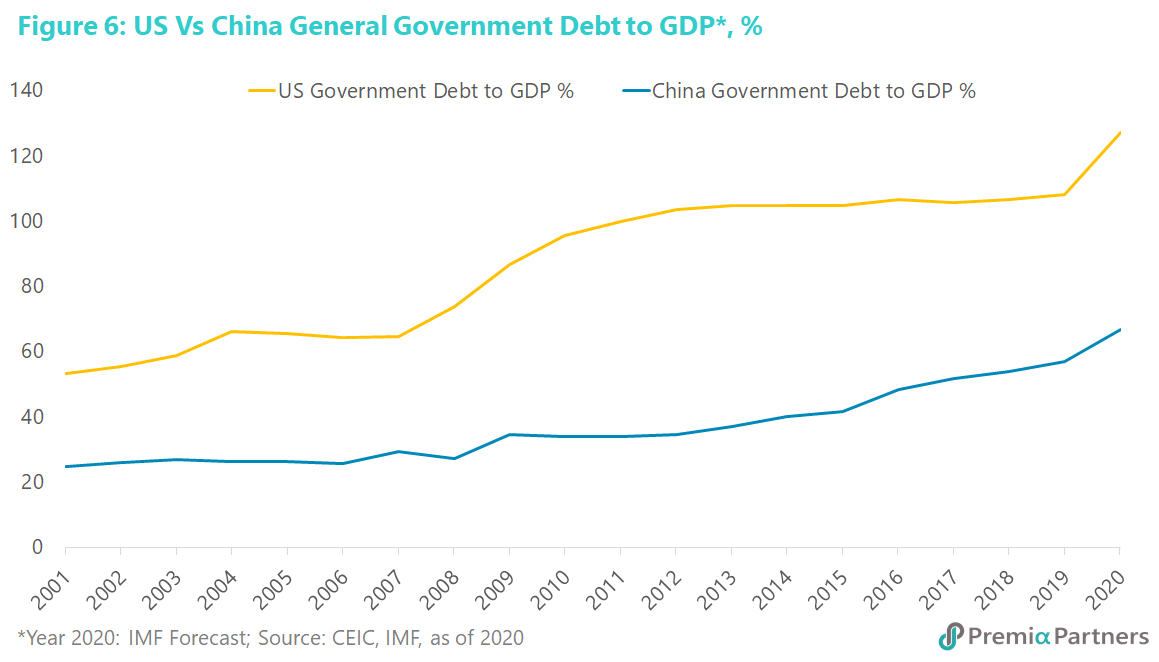 5)    Stronger CNY, weaker USD on higher US inflation. The rebound in the US Dollar from early January to late March appears to be yet another countertrend rally, playing out in a series of lower highs and lower lows. As we wrote early September last year, the technical rebound in the DXY unfolding then was “untrustworthy” and “an opportunity to diversify their currency holdings away from the Greenback”. https://www.premia-partners.com/insight/us-dollar-an-untrustworthy-rebound

And as it turned out, that rebound lasted only about a month, and has since gone on to trade yet lower (figure 7).

China, with the prospect of lower inflation amidst strong economic growth, will likely see the Renminbi strengthen yet further against the Dollar. It is not just USDCNY going lower. The US Dollar Index DXY will likely continue lower to compensate for the unprecedented pace of monetary expansion.

The idea that Treasury and the central bank can collude – albeit with an implicit rather than explicit understanding – to print massive amounts of money to fund ever higher levels of debt without consequences is fantasy. The pressure valves for this kind of pressure cooker stimulus are higher inflation and a weaker currency. 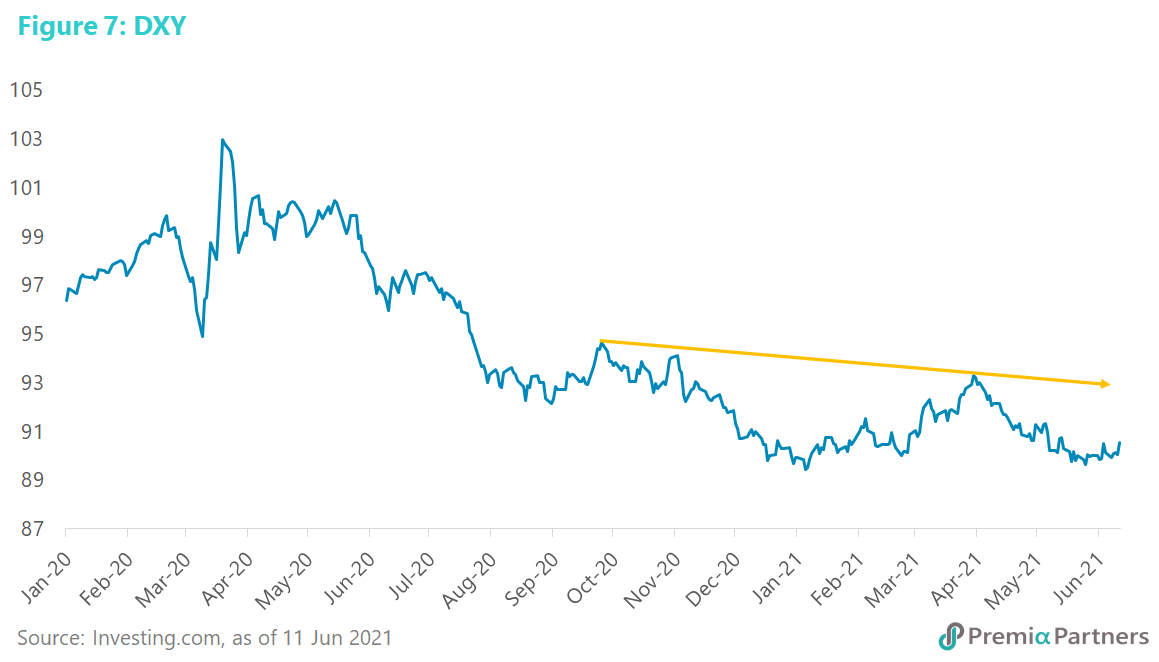