Buying the recovery not the pandemic

For the year to August 6, the so-called “Fab Five” were driven crazy by the pandemic – up 44% (figure 1). They drove a similar divergence between Nasdaq 100 and the Dow Jones Industrial Average – the “tech” beneficiaries of pandemic versus the victims of lockdowns. 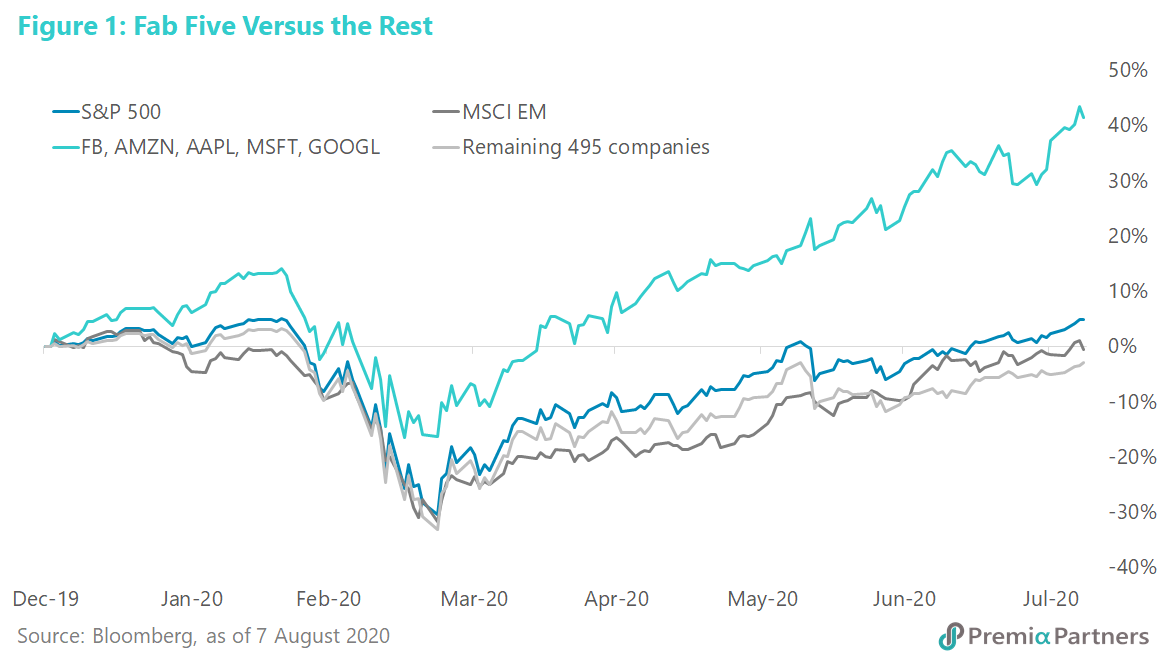 Buy the pandemic, sell the cure? Yes, the tsunami of money created by the developed market central banks, particularly the Federal Reserve, has been a part of the story.

But note that the tidal wave of money did not sweep all stocks up anywhere near equally. Year to date, if we were to construct an index called the S&P 495, it would still be below water. The MSCI Emerging Markets is struggling to break even.

Perhaps a more accurate narrative is the “Fab Five” are benefitting from people locked down at home, which then begs the question of what happens when a vaccine is found?

Leadership could rotate away from tech stocks as the world gets nearer to a vaccine. It has been pointed out that the forward S&P 500 P/E “z-score” (which measures its deviation from the mean) is above 3. This is a score which was last hit in the late 1990s during the final stages of the dot.com bubble. Another way to see it is the ratio of the Nasdaq 100/S&P 500, which has just popped above the dot.com peak of early year 2000.

This has been driven by a handful of “StayHome”/”WFH” stocks. According to Thomson Reuters data, Microsoft is trading on a forward PE of 33x; Apple is on 29x; Amazon 111x; Facebook 34x; Alphabet 35x; Netflix 79x.

These are bubble-like valuations. Yet, “irrational” exuberance is not a very fair description. It is quite rational if the world is facing a long period of isolation/social distancing, when bricks and mortar businesses will either be operating at way below normal capacity or (as with airlines and retailers) largely shut down. So, investors faced with lack of choice and monetary expansion/Dollar debasement are drawn to stocks that live in the virtual world – digital devices, online shopping, media streaming and social media.

However, the bubble is likely to pop when the theme runs its course, and the theme could run its course even before the pandemic is over – as the world inches closer to a vaccine or even effective treatments.

What happens when a vaccine emerges? The divergence between pandemic sectors and recovery sectors will likely reverse.

Investors seeking value in a world awash with money will turn from “growth” to “value” (and we use that loosely to refer to beaten down stocks), ironically because economic and earnings growth will finally return. That means sectors like financials, industrials, energy, materials and real estate will start outperforming technology and communication services.

Emerging Market stocks will likely also have their turn at outperformance. The ratio of the MSCI Emerging Markets/S&P 500 has already gone back to levels of early 2000s (figure 2). 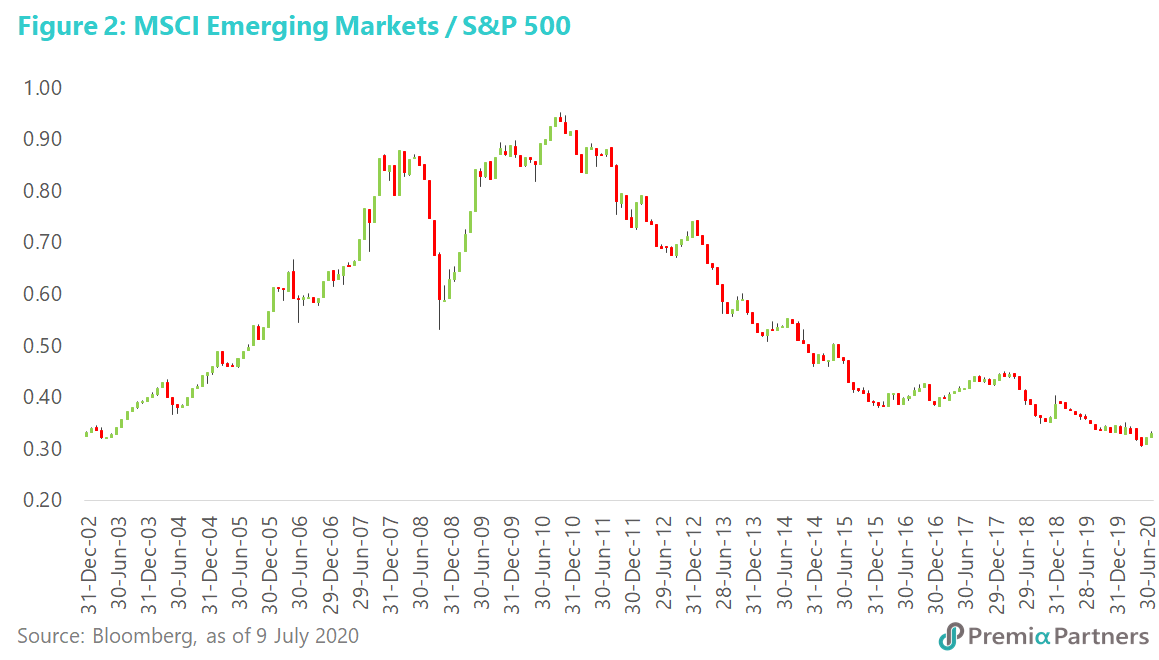 China, which accounts for around 40% of the MSCI Emerging Markets index, is likely already in a cyclical mean reversion of its relative performance against US stocks (figure 3). 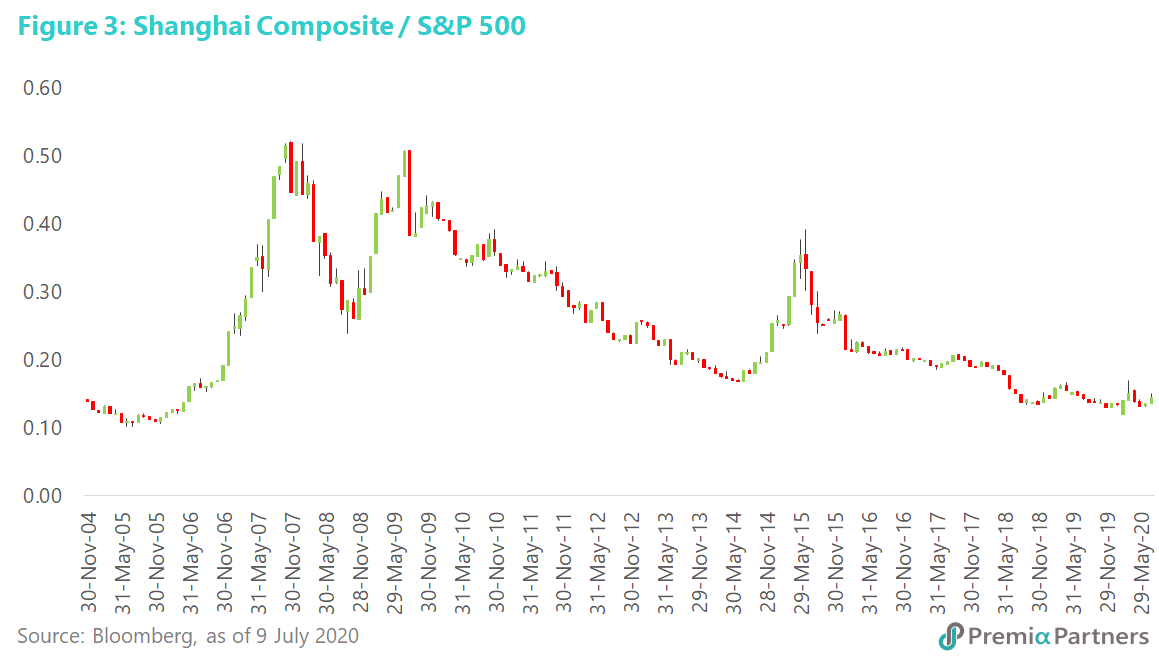 And a big driver for that outperformance will be valuation. In short, like-for-like, Chinese equities offer better value across the board (figure 4).