The US Federal Reserve pumps out an endless stream of zero interest rate money to finance the Government’s deficit spending. The handouts make most American workers better off financially during the pandemic than before. Meanwhile, the stock market soars. Not bad for the worst pandemic in 100 years. What can possibly go wrong?

• US inflation expectations are rising rapidly and depressing the Dollar

• One component of inflationary expectations – the 10Y US Treasury yield – has also been rising rapidly, threatening to choke off the US equities rally

What’s wrong with this picture? The US Federal Reserve pumps out an endless stream of zero interest rate money to finance the Government’s deficit spending. The handouts make most American workers better off financially during the pandemic than before. Meanwhile, the stock market soars. Not bad for the worst pandemic in 100 years. What can possibly go wrong?

American workers got paid more not working. As University of Chicago/Chicago Booth researchers found, three-quarters of US workers received more from unemployment insurance under the CARES Act than they did from wages alone when they were working. A study by the National Bureau of Economic Research (NBER) found that Federal welfare payments made under the CARES Act, when combined with state unemployment benefits meant that half of the eligible unemployed were last year entitled to total unemployment benefits that replaced at least 134 percent of their lost wages. Two-thirds were eligible for benefits larger than their lost earnings, and a fifth are eligible for benefits at least double their lost earnings. The Biden Administration will soon top up the US$600 welfare cheques to a total of US$2,000.

Where’s the lunch bill? Milton Friedman made famous the expression “there’s no such thing as a free lunch” in the title of his 1975 book. While compassion during a crisis is a good thing, Americans may be about to find that “lunch bill” tucked away in inflation and inflationary expectations. 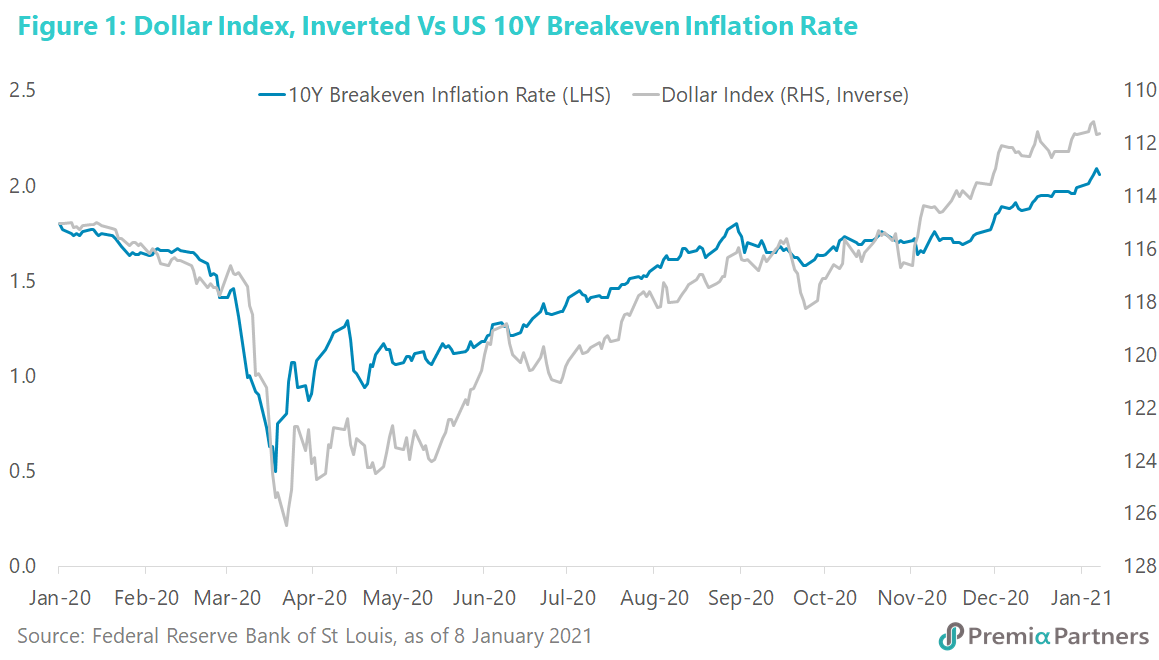 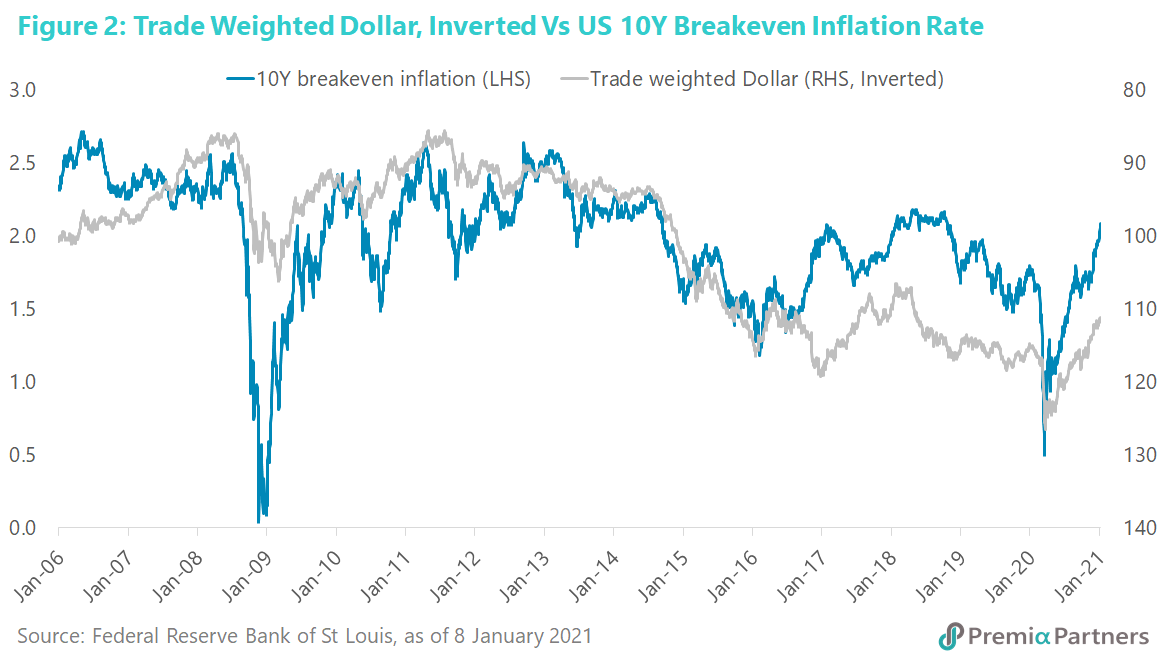 Rising US inflation expectations is undermining the Dollar. At a very general level, deflation can be supportive of the value of a currency, given that the currency buys more goods and services. There is something to that theory in the resilience of the JPY despite its stubbornly low economic growth rates. On the same logic, the reverse is also true, i.e., inflation reduces the value of a currency by diminishing the amount of goods and services the currency can buy.

If inflation is unchanged over the next 10-years, you should get pretty much the same total returns from holding a 10Y UST as you would from holding a 10Y TIPS.  Yet, if the market expects inflation to rise, it should logically be selling USTs and driving up the nominal 10Y yield, while buying TIPS, driving down the equivalent maturity TIPS yield. In the process, it drives up the spread between the 10Y UST yield minus the 10Y TIPS yield, resulting in that spread being used as an approximation of the market’s inflation expectations.

The 10-year breakeven inflation rate is now telling us the market is increasingly fearful of US inflation.

The very recent bounce in the US Dollar is unlikely to be sustained. The rebound in the US Dollar Index DXY that started from around January 11 was not unexpected given it had been trading at extremely, technically oversold levels. It could be supported near-term by short covering in what has become a very crowded short Dollar trade. However, rising fear of inflation is likely to undermine that Dollar rebound sooner rather than later.

Be wary of complacency. There are many economic commentators who still dismiss inflation as a bogeyman – an imagined evil. Yes, the core PCE inflation rate is still modest on a year-on-year basis but it is gathering momentum on a quarter-on-quarter basis (figure 3). 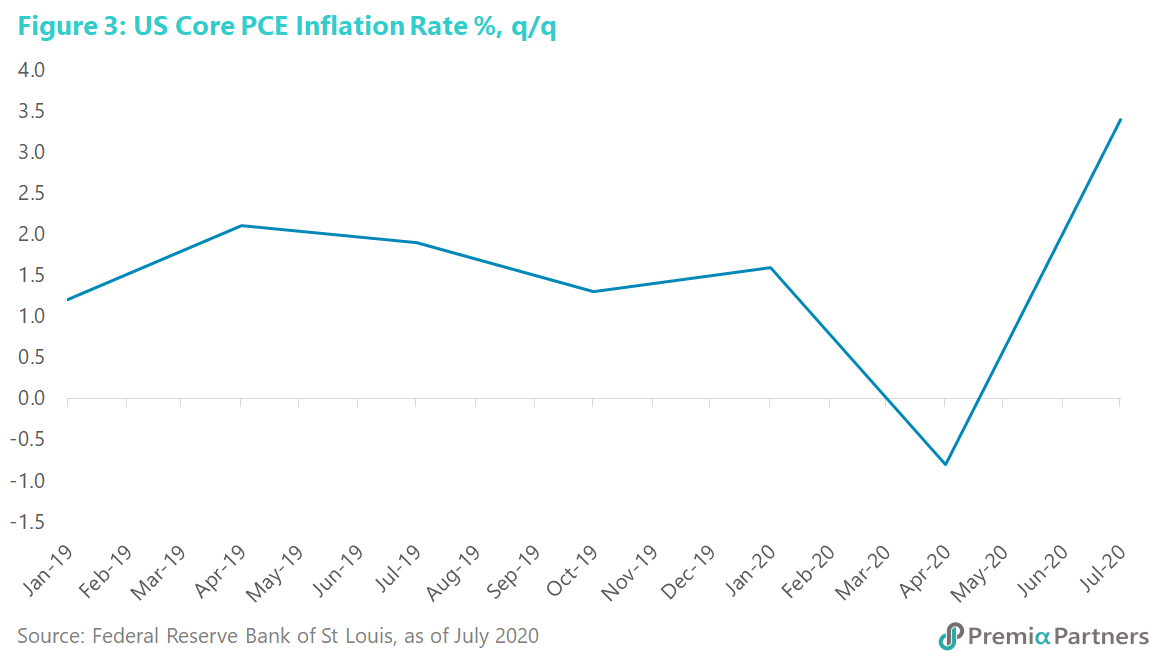 If it is already doing that in the midst of a pandemic and political turmoil, consider how it might look like when the pandemic is over, and all that money is still sloshing around. Partly as a result of all the money handed out, deposits in US commercial banks grew by almost US$3 trillion over the course of last year. To put that into context, that is growth of almost 23% in 12 months.

There is also growing concern that the official inflation figures are not reflective of real inflation as it impacts on people’s current spending patterns. That is, the pandemic had changed consumption behaviour in a way that is no longer well reflected in consumer price inflation baskets. A National Bureau of Economic Research study of inflation using a “COVID-updated” basket of goods and services suggested that US inflation might have been much higher last year than estimated by official inflation surveys.

Anyway, what matters more to markets is the forward-looking inflationary expectations as reflected in the 10-year breakeven inflation rate, rather than the backward-looking inflation data rolling in from quarter to quarter. By the time the lagging data tells you the economy has an inflation problem, the markets would likely have already adjusted in advance.

The threat of rising inflation expectations to US equities. This goes to the so-called “yield gap”, or more precisely, our preferred measure of the spread between the S&P 500 trailing dividend yield minus the 10-year US Treasury yield.

At what point do rising inflation expectations and a rising 10Y UST yield choke off the US equities bull? It doesn’t have to end just because that spread goes to zero. Indeed, bull markets often enter a euphoria phase when that spread goes negative. Nevertheless, the bull market then enters a much more dangerous phase, when euphoria over reflation can suddenly turn to fear of inflation.

Strong US equities, weak Dollar versus strong Chinese equities, strong Renminbi. A weakening US Dollar could eventually reinforce the drag on US equities from a rising 10Y UST yield. Commentators are expecting a rising 10Y UST yield to stop the decline in the Dollar. It has to be acknowledged that rising inflation expectations and a higher 10Y UST yield could be tolerated by the market if they are accompanied by strong earnings growth. Heightened fear of inflation in the absence of a strong rebound in corporate earnings could be a spoiler here. If the Dollar continues to decline over coming months, we have to wonder about the market’s tolerance for a “strong equities, weak currency” trade-off. The contrast to the “strong equities, strong currency” offering in Chinese equities will sharpen investors’ minds (figures 4, 5). 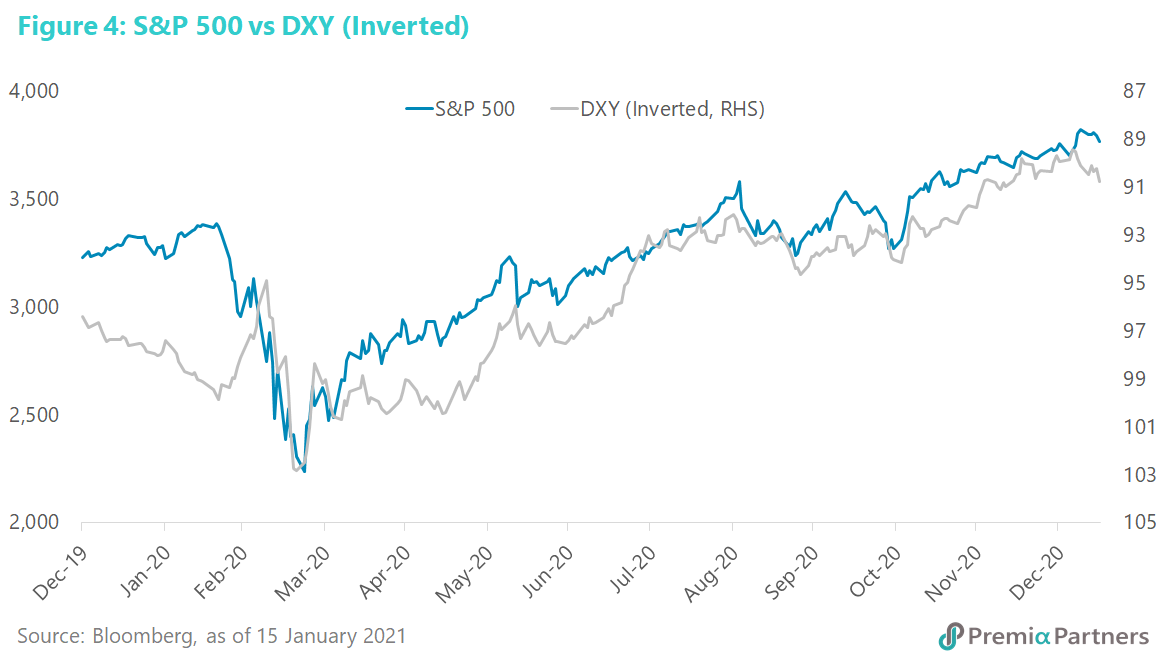 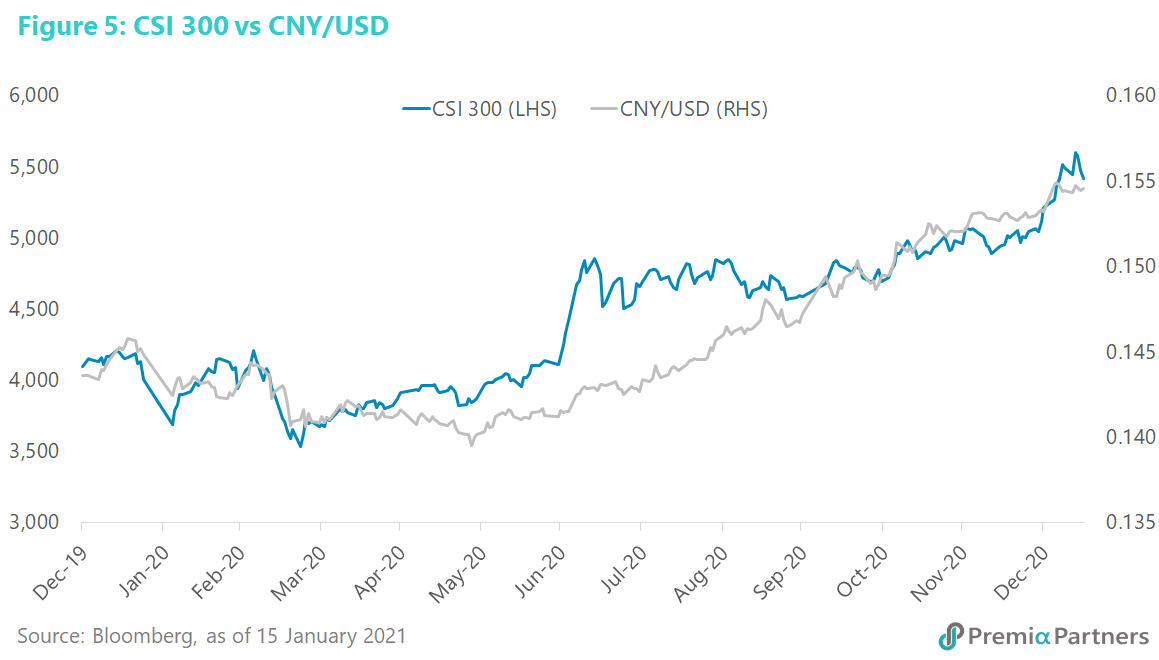