Are you game? Opportunities from the competitive battlefields of eSports

We previously highlighted the gaming industry just after the coronavirus outbreak in Account of an atypical, tech-enabled CNY holiday. With the COVID-19 pandemic raging on globally and people spend more time at home social distancing, the gaming industry has shown greater potential of booming opportunities. The large demographic base of tech-savvy and mobile-first youths born in the digital era provided a strong head start for China, especially in eSports.

The global video game market is estimated to have generated over US$ 150 billion in revenue in 2019, and the figure is expected to reach over US$ 200 billion over the next two to three years.  This impressive revenue figure takes into consideration not only the gaming content and right fees, but also a significant portion of sales of in-game virtual add-ons such as gears and decorations.  As seen in Figure 1, the three Asian markets of China, Japan and South Korea take 3 out of the 5 spots in the top-five league table and currently account for about 60% of worldwide revenue. 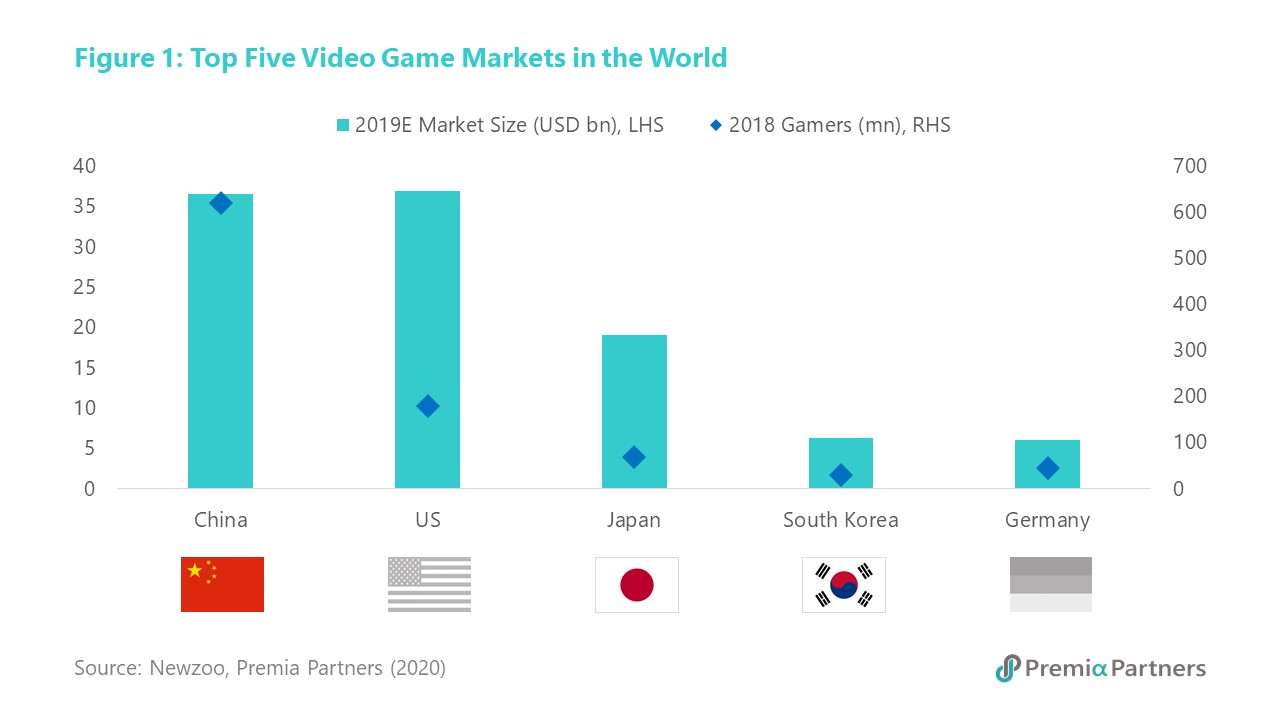 While NBA games, Premier soccer leagues, and even Tokyo Olympics all suspended due to the COVID crisis, there is one particular sport in the video gaming industry that is seeing vigorous growth both in number of participants and viewers, and that is – electronic sports (aka eSports).

eSports, which takes the form of organized, multiplayer video game competitions, has emerged into a professional league structure and drew a large audience compared to traditional professional sports in recent years. According to gaming market researcher Newzoo, global eSports revenues will reach $1.6 billion by 2023 (Figure 2), and that is without counting broadcasting platform revenues.  China accounted for about 20% in 2019 and is expected to become the largest market with over $380 million in revenue by the end of 2020. 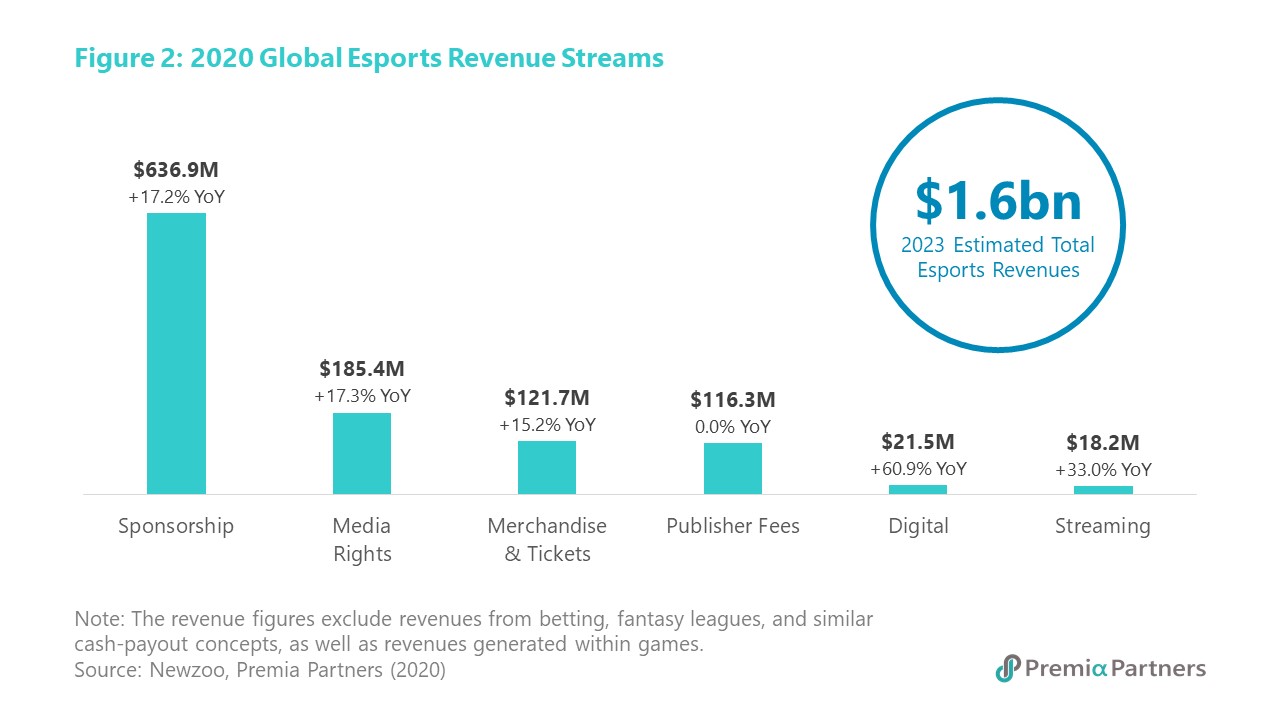 eSports has seen incredible growth in large part because of the social component of gaming and live streaming.  Newzoo also estimated that global esports audience has nearly 500 million, with half being esports enthusiasts and another half occasional viewers.  China currently accounts for one-third of the worldwide viewers. While the coronavirus has disrupted offline tournament events in China, online events continued to attract new, otherwise stay-at-home-social-distancing, audience as many professional esports players now start to play games together with other popular artists and celebrities via live streaming platforms to attract traffic and interact with fans online.  On the other hand, development in cloud technology and the commercialization of 5G will further lower the cost of having faster and better internet bandwidth and boost the cloud gaming market.

China is a very compelling market, yet the value chain of China’s video game industry (Figure 3) is rather vertically integrated with tech giant Tencent by far the most dominant player controlling full or partial ownership of games (e.g. League of Legends, Fortnite), leagues (e.g. Honor of Kings, Peacekeeper Elite) and streaming channels (e.g. Douyu, Huya, Penguin eSports).  That said, income streams are generated from tournaments, sponsorships, broadcasting and various related consumer products; as a result, the eSports segment plays an integral role in the gaming, technology, and consumer industry. Furthermore, it is not only relevant to the millennials and GenZs, but also investors and governments. 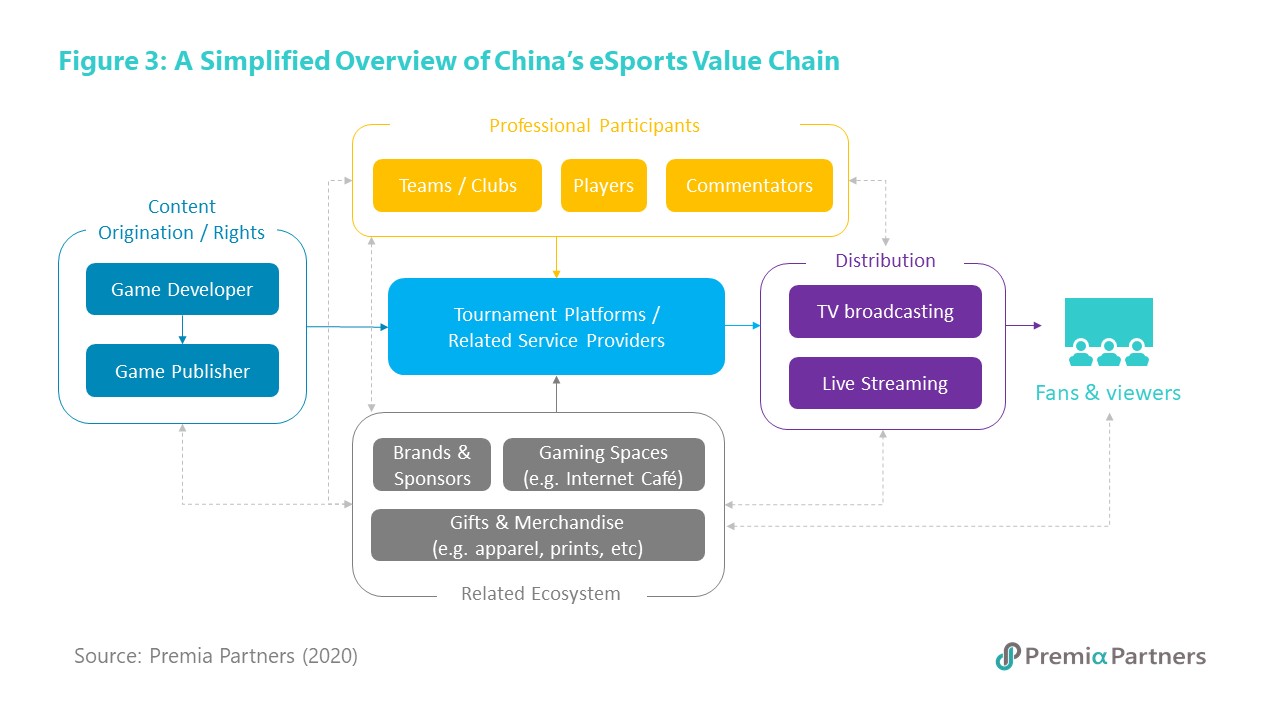 Private capital and city governments appear to be the most invested in the growth of the eSports segment.  Major Chinese cities such as Shanghai, Chongqing and Hangzhou are investing in eSports infrastructure to encourage the growing industry. Shanghai in fact has announced a desire to be a global eSports hub within three-to-five years.  Even Beijing, the capital city that traditionally viewed online gaming as unhealthy and counterproductive for young people, has recently changed its stance with more encouraging policy supports on hosting tournaments in collaboration with tech companies such as Tencent.

For public equity investors, the current universe of gaming companies is relatively limited and therefore one would have very minimal exposure if holding a broad market China A strategy.  Our China New Economy strategy, on the other hand, provides exposure to a few domestic leading game developers (e.g. Perfect World, Zeus Entertainment), internet café operators (e.g. Shunwang Technology), and those in the related ecosystem (e.g. OurPalm - which is a media/gaming company that also invests in Bilibili and Wanyoo internet café).  For the broader Asia video gaming industry, our Asia Innovative Technology strategy captures not only China’s largest game houses Tencent and NetEase, but also Korea’s NCSoft, and Japan’s Nintendo. As Hangzhou, the home city of Alibaba, is said to have eSports as a medal event at the 2022 Asian games, it will not be surprising to see more IPOs from companies in the value chain of China and Asia’s video game industry.  eSports is one of the many booming segments in this digital era. Our two Premia strategies are designed to capture these vibrant new megatrends while offering diversified coverage on other adjacent rising industries such as 5G, AI, cloud, and IOT.

Lastly, in case it has not reached you yet, I’d like to re-share our latest mini-webinar: Through the looking glass - the virtual lands of eSports, eGaming and live streaming in China