Where next for global equities?

Looking past stellar Q1 returns, we discuss positioning going forward and the need to navigate the conflicting signals offered by equity and bond markets today

Positioning between conflicting signals from the equities and bond markets

What happens now for global equities after what has been a good first quarter?

The S&P500 has just pushed through the 2870 resistance marked by the January 2018 high. And there appears considerable momentum that could take it higher. The same upward momentum is apparent in the European equities markets as well.

But the bullishness appears less about good news in the economy than relief that the monetary tightening cycle has ended very prematurely in both the US and Europe. And while that may be enough to power stocks higher near-term, the risk-reward considerations should give investors cause for caution.

Central bank action lifts sentiment. The US Federal Reserve has performed the financial equivalent of a “handbrake turn” – yanking the handbrake and spinning the vehicle into a U-turn. At the December 2018 Federal Open Market Committee (FOMC) meeting, the Fed hiked its policy rate to 2.25%-2.50%, and signalled another three hikes to 3.0%-3.25% in this cycle. The Fed’s policy committee also signalled it would continue “quantitative tightening” (QT) – that is, running down its balance sheet – at a rate of US$50 billion a month. Only weeks later, by late January, the Fed signalled it would end the rate hiking cycle and stop QT. 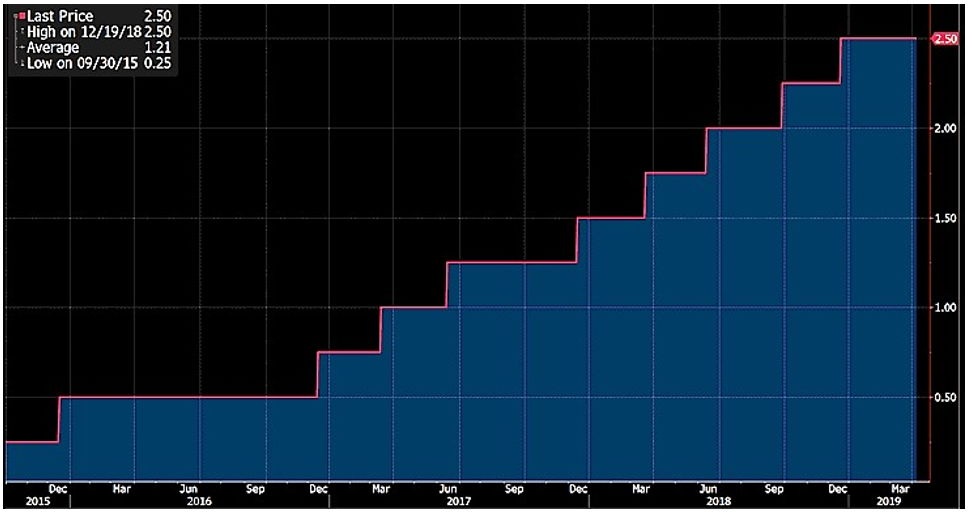 The European Central Bank (ECB) similarly committed to keep its key rates at where they have been for the past three years – from -0.4% to 0.25%. It also committed to maintaining the size of its balance sheet – that is, there will be no QT. For good measure, it introduced a new series of the “targeted long-term refinancing operations”. This new series is called “TLTRO-III”.

The global economy isn’t getting any better. Central bankers do not normally do “handbrake turns” for cheap thrills. Such manoeuvres are embarrassing to say the least – they speak of policy misjudgement. Further, they speak of alarm. The reason for this renewed dovishness from the central banks is simple – economic signals in the US and actual conditions in the Euro Area are worrying.

US GDP growth has been decelerating – from 4.2% q/q in 2Q18 to 2.2% q/q in 4Q18. The headline still presents a decent figure, until you consider the relentless inventory build up in 2017 and 2018. Inventory to sales spiked abruptly in 2018. There are limits to the build-up of inventories relative to sales. Coming drawdowns on stocks will further slow economic growth. Indeed, the US is back into disinflation – with the inflation rate falling from the mid-2018 high of 2.9% to 1.5% in February. 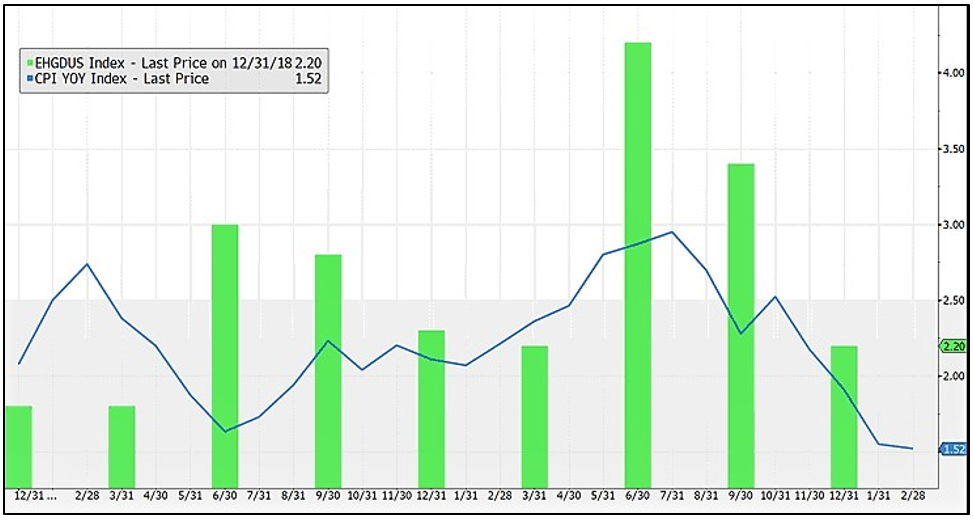 In the Euro Area, the backdrop for the ECB’s renewed dovishness was against borderline recessionary conditions 0.1% q/q GDP growth in 3Q18 and 0.2% q/q growth in 4Q18. Inflation languishes around 1.4%-1.5%, significantly below the ECB’s target 2% rate. And Japan has been flitting in and out of economic contraction over the past year. 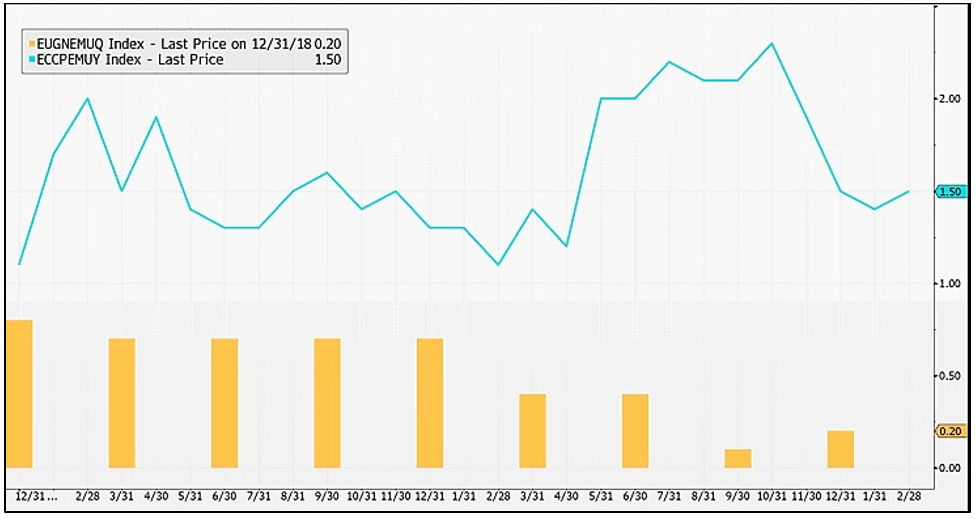 Hope for renewed policy stimulus – be careful what you wish for. This can’t be just about the cessation of policy tightening. That should already be in the price.

The problem with wishing for more policy stimulus should be obvious. The Federal Reserve has very little by way of interest rates to cut. Historically, 225 basis points (before we get back to the “zero lower bound”) is not enough to stimulate recovery should the US fall into recession. The ECB and the Bank of Japan have nothing to cut.

What about a resumption of quantitative easing? Yes, that could be the next step when central banks hit the “zero bound” on interest rates. The problems are legend by now. But they are worth recapping:

Monetary stimulus works ultimately by encouraging (or at least attempting to encourage) consumers and companies to bring forward spending and investment from the future. If it is successful, it merely works by hollowing out future demand.

Clear and present danger. The market may relegate the above concerns about “QE infinity” to the theoretical future. But the bond market is already pricing in a sharp slowing in economic growth, and possibly even recession. There has been a creeping inversion of various parts of the US Treasury yield curve over recent months. The 3m-10y portion of the US Treasury yield curve – the part of the yield curve seen to have the best predictive powers of economic slowdown/recession – has just inverted. And that inversion comes ironically amidst renewed bullishness in equities. As I wrote at the start of this piece, it is possible that equities could continue higher on the economic slowdown that the bond market fears. But this is picking up pennies in front of a steamroller.

US Treasury 10Y (in green line) dipped below 3M (in blue line), resulted in an inverted yield curve 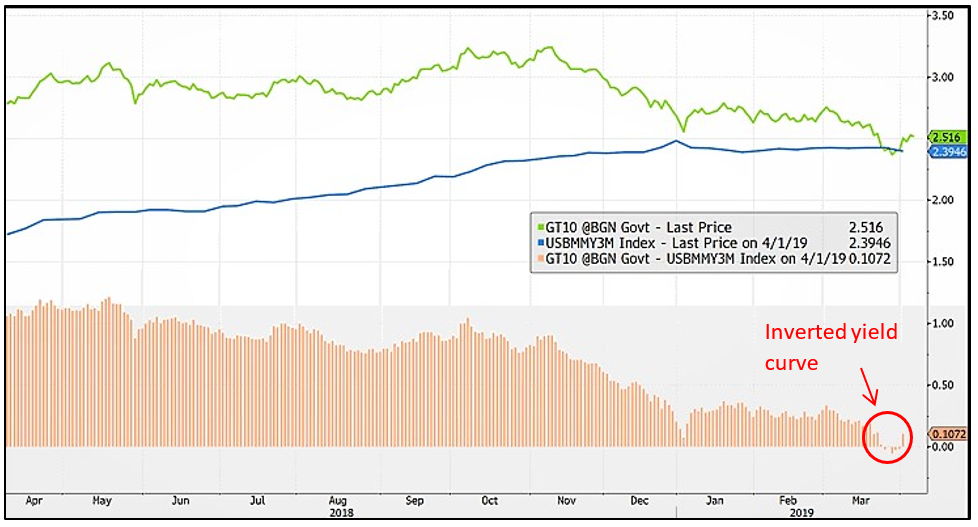 A more prudent strategy. I would maintain my late January recommendation of going defensive – switching from growth to value. And to switch to stocks/sectors with lower GDP-sensitivity – healthcare, consumer staples, telcos, and utilities. A recent publication by independent research house TSL Lombard pointed out that during the last three yield curve inversions, materials, banks, consumer discretionary and tech tended to underperform. Energy, healthcare, utilities and consumer staples tended to outperform. So, while staying invested, it would seem sensible to rotate towards more defensive positions.