Phase 1 is not even a trade war truce – it’s an agreement to contain the conflict. The US-China “Phase 1 trade deal” is an agreement to contain the current trade conflict. The two countries remain locked in trade hostilities – as evidenced by continuing increased tariffs – albeit at lower levels of intensity. They remain locked in broad-based strategic competition.

Expect more friction as President Trump goes into election campaign mode. Looking forward, investors should expect more turbulence on the trade front. Given President Trump’s track record for unpredictability and “out of left field” moves, investors should price some buffer for the probability of him revving up the conflict again, particularly if he needs nationalism-driven votes ahead of the November 3 Presidential Election.

The agreement on intellectual property protection and technology transfers is in some areas vague and open to differing interpretations. These could be sources of future tensions.

China buys more time to reduce its dependence on US technology and trade. China will use the time bought by the containment of the conflict to speed up its race for technology, trade linkages ex-the US, and domestic consumption/import substitution to lower dependence on the US.

Beyond the Chinese New Year handshakes, what next? China had maintained a studied silence while President Trump alternated between optimism, pessimism and threats in the negotiations.

China has agreed to buy more from the US. For China, that would be an acceptable, transactional solution to placate a famously transactional US President, except President Trump’s targets are extremely high for his time frame. (More on that later.) But for now, China’s agreement to the very ambitious import targets will buy it time.

China has agreed to abide by IMF rules against currency manipulation. This will not change anything for China’s currency regime as the US Treasury has just dropped its designation of China as a currency manipulator.  In any event, currency stability also suits China given that an unstable/weak Renminbi had in the past encouraged capital flight. Yet, there are more difficult issues ahead.

China is likely to hold a steady monetary policy course to ride out the trade turmoil. Significantly, China has maintained a steady course on monetary policy through 2019 despite slowing economic growth and the trade war with the US. Indeed, it may be that China is moderating stimulus because of the trade and strategic tensions with the US. That is, it realises that imprudent stimulus will weaken rather than strengthen the economy over the long-run.  China’s economic policies for 2020 should be seen through long vision lenses.

There have been many articles in the Chinese government-controlled media over the years highlighting the policy mistakes that led to Japan’s secular stagnation. As outlined above, the Yen appreciation forced by the Plaza Accord is often cited, as is the excessive stimulus that inflated asset bubbles.

Outstanding CNY loans growth remained at relatively moderate levels of around 12-13% through the course of 2019, compared to the peaks of over 15.5% in 2016. 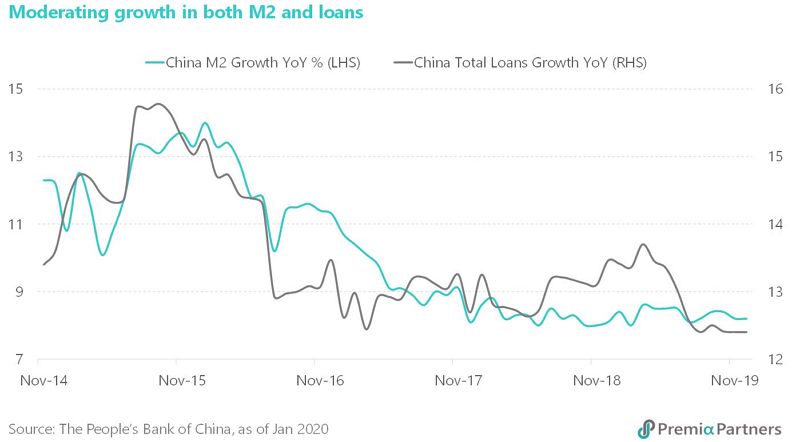 A few years ago, Premier Li Keqiang said China was done with “flood irrigation” of its economy and would focus on “drip irrigation”. Looking back, he has been good at his word. Indeed, President Xi Jinping has cited control of financial risks as one of his three priority “battles”, along with poverty reduction and environmental improvement.

Read between the lines: China will accept moderately slower growth as it balances financial risk and environmental degradation (both of which come with very high growth) and poverty reduction (which would be compromised if there was a sharp decline in growth).

So, Beijing will stimulate the economy when needed to avoid a sharp economic slowdown. It has the fiscal and monetary means to do so as mentioned in an earlier article: The Chinese Economy's 5 Biggest Myths. But policy moves are likely to be measured and targeted rather than broad-based, “bazookas”.  Sometimes thought by economists as “policy flip flops”, what Beijing is doing is more accurately characterised as slowing a huge semi-trailer by alternating between the brakes and the accelerator, to avoid jack-knifing and crashing the vehicle.

As Dr. Peter Navarro, Director of the Office of Trade and Manufacturing Policy for the Trump Administration wrote in his book “Crouching Tiger”: “In thinking historically about the strategic implications of China’s rise and growing size, consider this: At the start of World War II, the combined economies of Nazi Germany and Imperial Japan were only half the size of the United States. If for no other reason than the sheer weight of its factories and work force, America thereby held the strategic high ground.”

On the other hand, the military spending trend lines of the US and China “are likely to cross in the not-to-distant-future as China’s GDP growth continues to significantly outpace that of the United States and as America’s economy continues to perform below historical levels,” Dr. Navarro wrote.

China’s long game. Interestingly, the US current account deficit has worsened since the start of trade tensions in 2018, while China’s current account balance – while volatile – has shown some overall improvement. These are the sums of total world trade relationships – overall economic and trade relevance – not just the bilateral between the US and China.

In this regard, China will race to build more trade alliances ex-US. As Michael Sampson from the Leiden University (Netherlands) noted, the ratio of intra-regional trade between East Asian countries alone has grown from around 25% in the 1960s to over 50% by the mid-2010s. With President Trump on the path of bilateralism and China championing multilateralism sans the US, China could reasonably expect to further reduce its trade dependence on the US. 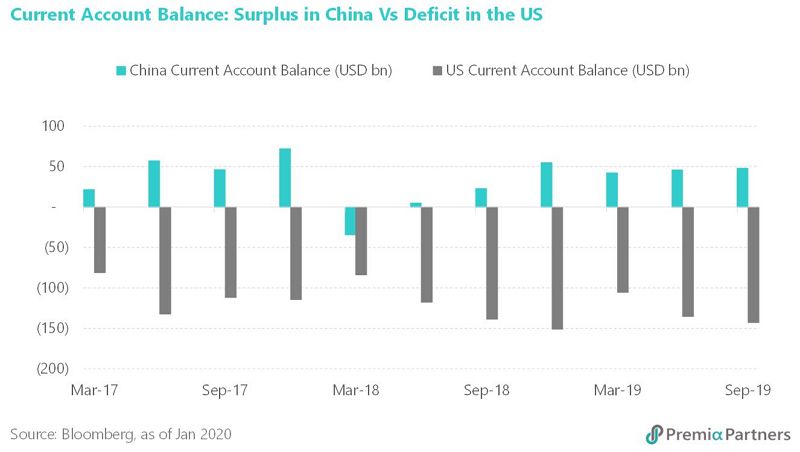 While Beijing will tolerate slower economic growth, China’s GDP is still likely to overtake US GDP in US Dollar terms sometime in the 2030s as mentioned in an earlier article: The Inevitability of the Chinese Consumer. In tandem, it will also grow the consumption share of GDP to lower the economy’s dependence on exports.

Meanwhile, China will race to reduce its technology dependence on the US. For example, it recently announced a US$29 billion state-backed fund to develop semiconductor capabilities.

Former US Treasury Secretary Hank Paulson wrote last month in the Washington Post: “Beijing’s industrial policy and China’s private sector are racing to propel the commercialization of 5G and the technologies, products and services it enables, not only for China but also for nations around the world that would welcome Huawei 5G. Even China’s state-owned enterprises have deployed quickly. Meanwhile, Washington has stalled.

“Speed matters because deploying a reliable and secure 5G network quickly creates a first-mover advantage and results in the commercialization of myriad products and services. China could erect some 150,000 base stations by the end of the year, about 15 times what the United States will have.

“America has no domestic manufacturer of 5G equipment, so it must rely on European or Chinese suppliers. China already has Huawei and ZTE, the biggest 5G equipment suppliers in the world, allowing it to move to market quickly. In China, 5G is already available in more than 50 cities, while in the United States there is only 5G E, which is no substitute for a truly competitive 5G network.

“Erecting an economic iron curtain, as some policymakers are calling for, won’t halt Beijing’s progress — nor will it energize ours.”