The Inevitability of the Chinese Consumer

We review the history of Chinese consumption over the last 30-40 years and explain why we believe the Chinese consumer holds the key to global economic growth, not just in China but in every country connected to international markets.

Chinese consumers are not only an important contributor to global growth, they will be critical in redressing the economic imbalance that has led the world to sluggish growth, negative interest rates and a fragile financial system.

To understand how the Chinese consumer came to be pivotal to a healthier global economy, we need to go back to historical events in the 1980s through to 1990s – the rise of the Asian Tigers in the 1970s, China’s embrace of market reforms and its explosive growth from the early 1980s, the Fall of the Berlin Wall in 1989, and the collapse of the Soviet Union in 1991.

A shorter version of the above chronology of seismic shifts in the geopolitics of the world might simply read: the failure of the economics of central planning, a rapid shift towards market-friendly policies, and the integration of a large part of the world into the global capitalist system.

From “End of History” to complacency and then crisis. Yet within only 20 years, the world went from the hubris of the supposed triumph of the capitalist-liberal democratic order – symbolised by Francis Fukuyama’s 1989 essay “The End of History?” – to the deep pessimism of the Global Financial Crisis in 2009. The story of this reversal of fortunes is also the story of how the Emerging Markets (particularly China) have now become a critical part of the solution to the imbalances that now weigh heavily on the global economy.

The four Asian Tiger economies of Singapore, Hong Kong, Taiwan and South Korea became the models for the “developing world” (as it was then called). These models favoured market price signals over central planning; a new openness to foreign capital and technology; and production for global markets over import substitution.

China’s economic growth rate surged from an annual average of 6% between 1963 and 1978 to 9.4% between 1978 and 2012, with double digit growth rates in more than a few years. Others in the “developing world” followed, but none matched China for scale and speed.

That speed and scale had enormous implications for the world economy – with its impact not realised until 20 years later, when the global financial crisis hit.

1)      A massive nation of producers and savers grew at a rapid pace – with critical economic and financial implications.  China’s labour force grew from 429 million in 1980 to 786 million last year.  When it started integrating its economy into the global production system, China accounted for about a third of the world labour force.  At the rates at which it was expanding its GDP, China became an agent of enormous economic changes around the world.

Even as it was rapidly growing in production, it was raising its gross savings rate, from 35% of GDP in 1980 to over 50% at its peak by the late 2000s. This was a rapidly growing nation of producers and savers. The upshot was a surge in its current account balance – reversing from a deficit of 3.7% of GDP in 1985 to a peak of almost 10% in 2007. Fuelled by the US dollar inflows from trade, China’s foreign exchange reserves went from only $2 billion in 1980 to almost $4 trillion in 2014. 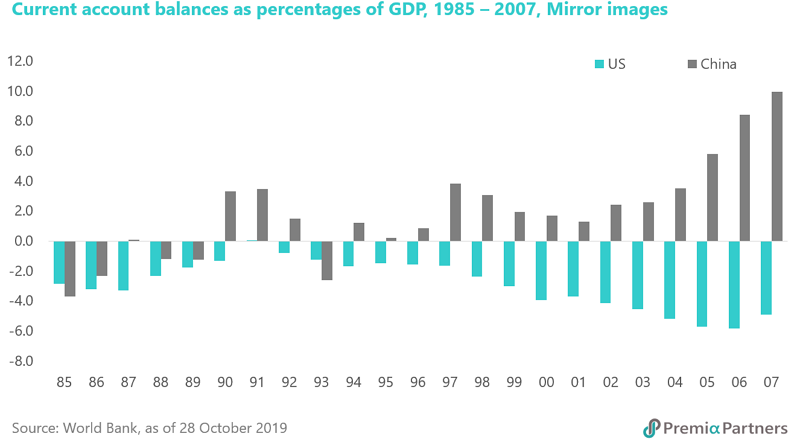 Coincidental? Probably not. Although there are data reporting and timing discrepancies, by definition, the current account balances of all nations should cancel out to zero. One country’s export is another country’s import. In this case, China’s current account surpluses and the US’ current account deficits were two sides of the same coin. Add to that the deficits of Australia, the UK, and the Euro Area’s so-called Club Med economies of Portugal, Italy, Greece and Spain.

As China’s “tsunami” of savings swept across the world, interest rates fell. The effective Fed Funds Rate peaked in 1981 at around 19% and then went on to a secular downtrend to almost zero from 2009 to 2015. Coincidence? Again, probably not. The surpluses of other Asian economies – and don’t forget Japan – added to the savings glut that swept the world. 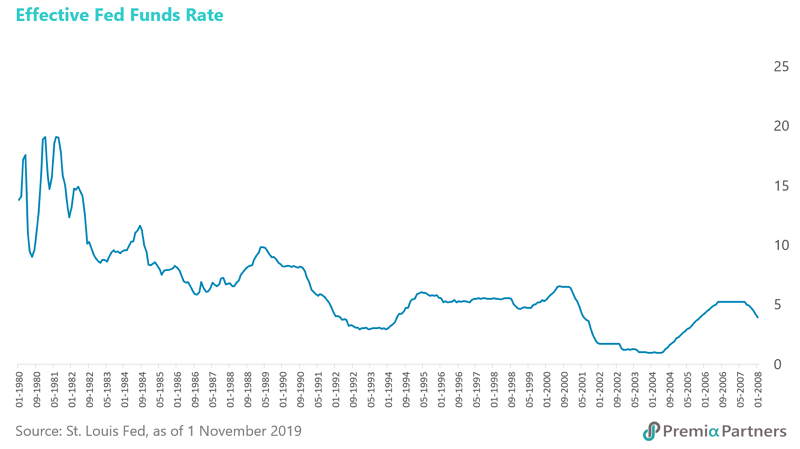 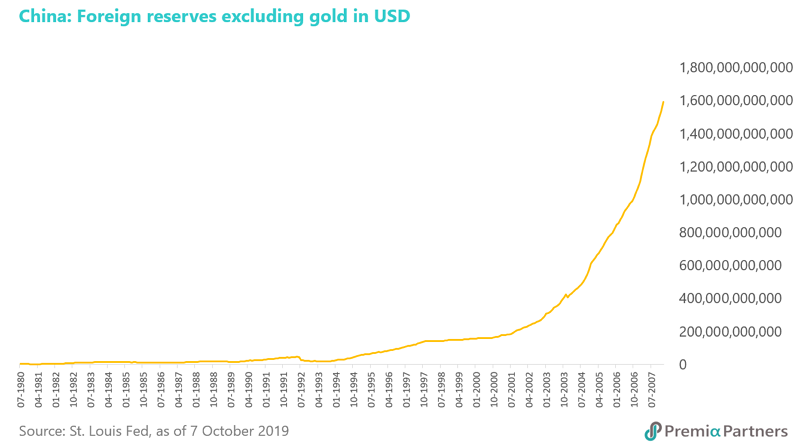 #1. It became easier for governments in the developed economies to deliver economic growth without the hard work of painful supply side reforms. The secular downtrend in rates and yields delivered monetary stimulus, encouraging households to bring forward future spending. Cheaper cost of funds also made it easier to deliver fiscal stimulus on borrowed money – think of the role of China’s purchases of the US Treasuries that fund US deficits. This was simply funding current economic activity with debt which would slow future economic growth. This was literally borrowing from the future – hence the sluggishness of growth, post the global financial crisis.

#2. The great decline in interest rates resulted in asset price inflation, following the logic of net present value being inversely related to the discount rate. The bubble in fixed income – further fuelled by central banks’ quantitative easing programmes – is the most obvious, but by no means the only, example.

The Chinese consumer and the global rebalancing. Even with 25% tariffs on all its exports to the US – assuming a resultant loss of 160-170 basis points of nominal GDP growth – China will still exceed the US economically, in US dollar terms, by the early 2030s. (It already is the world’s largest economy by a large margin in Purchasing Power Parity terms.) Those tariffs will slow that inevitability, but by only a few years. (We are mindful that those tariffs may be held back in a trade truce but have factored them in out of caution.)

That growth will likely be overwhelmingly driven by consumption, rather than by investments and net exports as in the past.

Assuming a moderate shift in the household consumption expenditure share of GDP from 40% to 45% by the early 2030s, the consumer market would have grown from US$5.3 trillion to over US$12 trillion.

The significance of that US$7 trillion “delta” in China’s consumer spending stands out in stark relief when you compare that against the US current account deficit which is currently running at around half a trillion dollars a year.

According to McKinsey Global Institute, “China’s consumption has been fuelled by rising household incomes and an accumulation of wealth. The share of households in the mass affluent category and above (defined as a household with disposable household income of 18,000 renminbi or more per month) quadrupled from 3 to 12 percent from 2010 to 2018. By 2030, 58 percent of Chinese households are likely to be in the mass affluent category or above, surpassing today’s South Korean share of 55 percent.”

Although the lack of an adequate social safety net has been a factor in precautionary savings, MGI found that “the spending profile of urban Chinese consumers is converging with that of their counterparts in cities around the world. Residents of China’s cities are devoting a greater share of their income to discretionary spending.”

Further, as savings is consumption foregone today for consumption in the future, the inter-generational wealth effect – savings and property bequeathed from parents to children – will likely be another booster for Chinese consumption.

Notwithstanding the talk from trade hawks in Washington about “decoupling” the US economy from China, the US needs Chinese consumers to buy more from it, not less.

On the other side of the trade dispute, Beijing needs the Chinese consumer to carry more of the burden of economic growth, to reduce the economy’s dependence on investment-driven growth. China’s savings-investment gap has contributed to over-investment in some areas, driving down returns and the GDP growth benefit for every dollar of investment.

Structural and tax reforms – all within the power of the central government – could help transfer wealth and income from State Owned Enterprises (SOEs) to households, boosting consumer spending power. They could also release the savings trapped as retained earnings in China’s SOEs as income transfers/social security benefits.

So, notwithstanding the tensions between the US and China, both economies have convergent interests in seeing the rise of the Chinese consumer.

Of course, much, much more needs to be done to fix the problems of the global economy. Among other things, there needs to be supply side/structural reforms to boost productivity, greater mobility of people and labour (not less, as the nativist movements around the world would prefer), and more incentive for enterprise. However, Chinese spending – and spending spread through the world, and not trade-protected spending within China – will be a critical element of that healing.