Looking for a high conviction basket of Asia growth opportunities? We have a solution for you! Premia Asia Innovative Technology is a diversified, transparent, cost-efficient strategy capturing 50 Asia innovation leaders, and it is a basket of stocks favoured not only by analyst consensus but also many long-term investors including leading sovereign funds and private equity firms. Apart from the well-known BATJs, this vibrant region is also home to many other innovative companies such as the new e-commerce disruptor Pinduoduo and the photon technology evergreen Hamamatsu.

Late August is a busy time with many companies announcing financial results.  For investors looking for growth opportunities in Asia, what is a good conviction list?  Today, I’d like to introduce you a cost-efficient conviction basket to capture the innovation megatrends in Asia.

Yes, you read me correct – an ETF strategist is recommending a conviction basket!  Also, I’m not initiating a new buy but re-stating the uniqueness and characteristics of our Premia Asia Innovative Technology ETF (AIT) as a high conviction list of stocks.

For those hearing this strategy for the first time, it utilizes a forward-looking approach to identify a basket of 50 pan-Asia innovation leaders that are not only titans or unicorns in their field but also invests heavily into research and development for future growth.  Compared to a traditional market-cap weighted ETF where the largest holdings dominate fund performance and the smaller holdings have mere presence but minimal contribution, our equal-weight design believes in long-term capital appreciation fairly across all holdings and is relatively similar to an active investor’s approach.

An article focused on more details about the strategy background and methodologies can be found here: Targeting Asian Growth Through Innovation

Why AIT can serve as a good conviction basket?

Since AIT’s launch in August 2018, the strategy has outperformed the other two popular US-listed China technology ETFs CQQQ and KWEB by roughly 4% and 11% in total returns, respectively, not to mention our HK-listed ETF also has a tax advantage for non-US investors.

As analysts updating estimates and making revisions last few weeks, we examined the latest analyst consensus ratings of all the 50 holdings in the AIT strategy from Bloomberg (Figure 1).  Most of these innovation leaders have quite popular analyst coverages as one would have imaged.  The median coverage is 24, while Tencent and Alibaba are the hot cakes tied at 57 coverage sources each.   Out of the 50 holdings, we have 37 companies in consensus of strong buy if we be conservative and ignore the mediocres around 3 to 4. 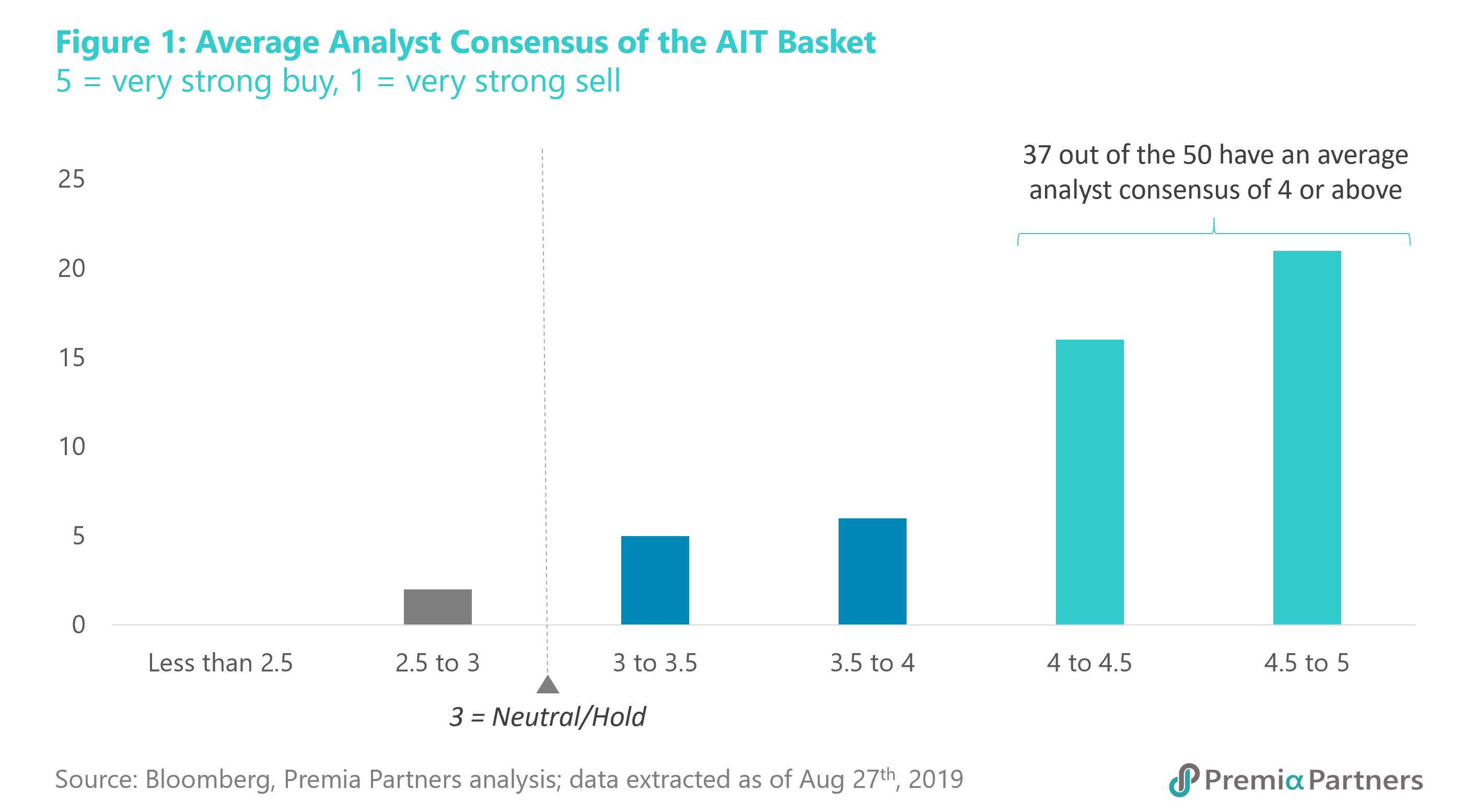 By the end of August, AIT has gained almost 7% since the last rebalancing in mid-June. Taking analyst consensus target price as an indication of potential future return, the equal-weighted AIT basket would have a total of 24% upside potential since its last rebalancing.

Apart from positive analyst estimates, the AIT holdings are also favoured by many long-term investors including quite a few leading sovereign wealth funds and private equity firms.  In fact, some of the world’s leading sovereign funds currently hold 45 or more of the 50 stocks.  Figure 2 below is the current top holdings in AIT:

What are some interesting holdings?

Deep diving into the recommended conviction list, I would like to share two AIT holding companies that are very different in nature, but both outstanding businesses in my opinion. The first is Pinduoduo – a social e-commerce company that made itself a strong challenger to the Alibaba/JD duoplay in less than four years. Pinduoduo made its debut on NASDAQ late last year and is a new entrant to the AIT basket at the June rebalancing.  The other is Hamamatsu Photonics – a Japanese company with over six decades of history, yet consistently demonstrating the “Shokunin” spirit and making light-powered innovations around photons across a variety of industry applications from medical devices to autonomous driving, and even (real) rocket science!

Unlike traditional e-commerce platforms, Pinduoduo’s founder Colin Huang combines the elements of entertainment and value into the business model.  Not only did Huang leverage his experience in both fields, he founded Pinduoduo at a time with rising trends and growing market penetration in gaming and online shopping, accomplishments from the established Chinese tech giants of Tencent and Alibaba, respectively.

The main feature of Pinduoduo’s integration of social components is the “team purchase” model whereby users can easily share product information and invite their contacts from WeChat to form a shopping team to get a lower price for their bulk purchase. This mechanism keeps the users motivated and hooked for a more interactive and dynamic shopping experience especially when coupled with loads of coupons, cashbacks, freebies and lotteries.  This model allows Pinduoduo to quickly capture users at a low cost (and Tencent is an early investor of Pinduoduo, making its use of WeChat traffic relatively cheap and easy).  This is not a brand new concept as Groupon pioneered that long before.  But thanks to the mobile penetration of WeChat and mobile payment infrastructure, Pinduoduo was able to virally spread deals among users and pick up exponential growth.  Now Pinduoduo has also added more gamify features to increase user interaction and stickiness within its ecosystem.

What’s mostly interesting and is a driving force of Pinduoduo’s success today is the platform’s market positioning and how they spot the right target users. To be honest, I am an active user of Taobao but not  Pinduoduo and am probably not representative of the millions and billions target users of Pinduoduo, but that doesn’t shy me away from liking the company from an investment and business model perspective.  Consider the fact that Taobao has 500 million users while WeChat has over 1 billion, the huge missing gap between China’s top penetrated apps is mostly distributed on one dimension toward 3rd or lower-tier cities and the other from the youngsters toward elder generations.  These groups of people who recently came online and rely heavily on WeChat as source of information are indeed the target users of Pinduoduo. With the trend of mobile penetration and improvement of rural living standards, this previously neglected market will continue to grow bigger.

The rising middle class and consumption upgrade trends have led to Taobao and JD’s initiatives of bringing overseas products to platform and cutting out lower quality merchants.  However, China is a massive country with a great majority of population, now mostly mobile-enabled, that are still very sensitive to price that value-for-money is the main consideration for this group.   This group has been underserved so far, and Pinduoduo is at the right time, finding the right ways to capture this long tail. 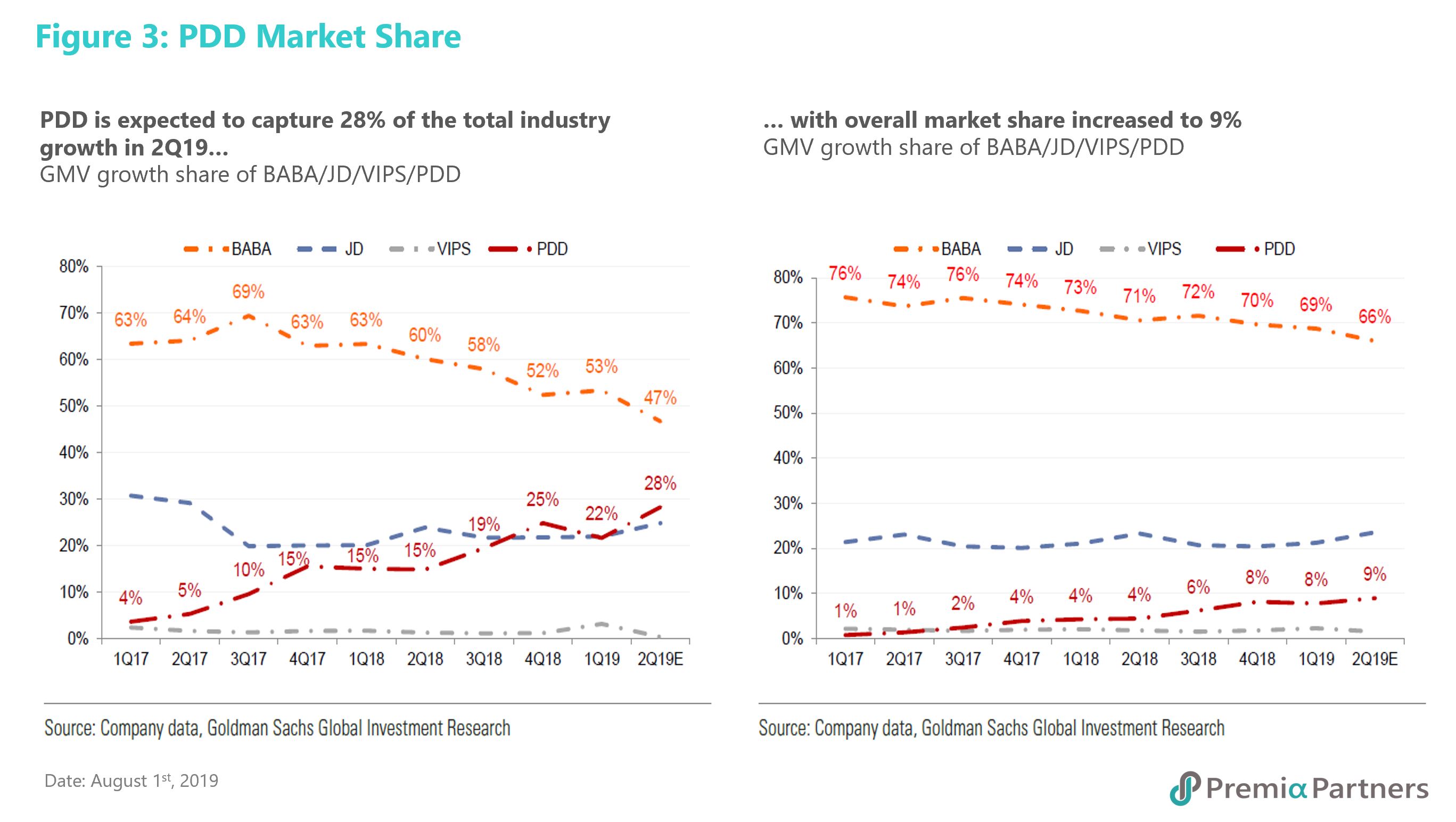 I am sharing Hamamatsu Photonics in this piece partially because it has the least analyst coverage (only 8) among the 50 holdings and is less known to investors, but more importantly it is a company that I pay a lot respect to.  The Japanese “Shokunin” spirit is often interpreted as “craftsman spirit”, but the deeper meaning is about the attitude and social consciousness that the generations of apprentice value and make their best effort to achieve.

Hamamatsu Photonics was established in 1953 by Heihachiro Horiuchi who studied under the guidance of Dr. Kenjiro Takayanagi - the “father of Japanese television.” Since then, the company has not only focused decades of work on the photoelectric technology developed by Dr. Takayanagi for converting light into electrical signals, but also inherited “the spirit of pursuing unknown and unexplored realms”.  Today Hamamatsu is one of Japan’s most successful makers of optical and electronic devices with more than 90% of global market share in photon multiplier tubes and a leading position in opto-semiconductors.

Hamamatsu is one of the only companies in the world that develops a wide range of light sensors such as their signature photomultiplier tubes and light sources such as lasers. Since the 1990s, Hamamatsu started to expand beyond its traditional photonic components businesses with a vision to contribute to better human life.  Today, Hamamatsu products are not only applied in smartphones, factory automation, advanced life science tools for imaging, environment measurement devices for water quality, high-performance optical semiconductor device for self-driving cars, but are also used in the state-of-the art Subaru Telescope at the National Astronomical Observatory of Japan, the robotic spacecraft Hayabusa to understand the composition of asteroids, and the next generation neuron physics of large-scale water Cherenkov detectors.

To maintain cutting-edge quality of its products and pursue future innovation, Hamamatsu re-invests at least 9% of the company’s annual revenue into research and development.  While I am far from an expert of photon technologies, I am very impressed by the culture and spirit of this company, which are important values for long-term investors.

The centerstage of innovation shall have both the new disruptors like Pinduoduo, and the evergreens like Hamamatsu.  Taking a forward-looking approach and appreciating companies that continuously invest significantly to research and development, our AIT strategy generates a solid conviction list of innovation leaders that is more than merely some conviction basket of hot trendy internet stocks.

Why AIT is an efficient basket for long-term capital growth?

To conclude, I believe many institutional and wealth investors are interested in capturing growth opportunities from the technology advancements in Asia.  However, not all have sufficient research capacity to actively handpick stocks.  Therefore, some common approaches are:

·         Make use of tech funds, but concerned about concentration in China and/or

·         Invests only in broad Asia or China market, and not sure about how to capture the thematic growth trends in a diversified strategy yet

If you fit in any one or more of the descriptions above, I would recommend you consider the Premia Asia Innovative Technology ETF as an alternative or a supplementary strategy as you would capture a high conviction basket of Asia innovation leaders while benefiting from the advantages of an ETF vehicle – i.e. cost-efficiency, diversification, transparency and liquidity.  Moreover, if you happen to hold a few of the holding stocks and would like to switch to our AIT strategy going forward, please also don’t hesitate to contact our capital markets team who would be more than happy to help you make in-kind creations.