The COVID-19 pandemic has slowed down productivity and daily lives, stagnated the global supply chain, and affected financial market returns across almost all asset classes. In the first quarter of 2020, all markets around the world reported negative returns with varying degrees. While it seems that all is going the same direction, especially in the equities’ world, the fundamental risk factors were not. Among the fundamental factors we employ for China A shares, some has performed better than others amidst the market drawdown.

Value continued to lag most of Q1, extending its trend from 2019.  On the other hand, we saw strong performance of the ProductivityGrowth factor and good resilience in Quality.  LowRisk and Size were negative in the first two months of Q1, but both had shown strong rebound as the pandemic gets gradually under control in March. (Figure 1) 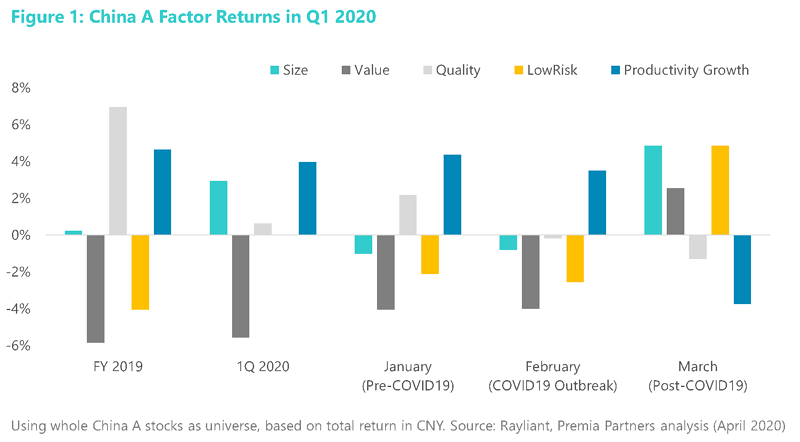 The unique ProductivityGrowth factor we employ in our multi-factor China A new economy strategy, which combines R&D, investments, profitability metrics, has demonstrated among the best performing and most resilient factor throughout this pandemic-led crisis.  On one hand, the light asset companies are less hurt by the economic slowdown compared to heavy-asset peers; on the other hand, companies with high exposure to this factor are typically “new economy” leaders – i.e. there’s some sector exposure interaction, and as we’ve observed the technology and new infrastructure leaders have significantly outperformed the rest of the market during the COVID-19 outbreak.

Performance in March was interesting for China A shares and its factors. Domestically in China, the total COVID-19 case curve has moved beyond an inflection point with fewer new confirmed cases since the beginning of March, and productivity has been resumed as our co-CIO David Lai shared in China's Work and Production Resumption. On the other hand, global situation worsens with significant virus outbreaks took place in Europe and the US, causing one of the largest US equity market crash since the global financial crisis. In a globalized economic environment with high supply chain dependencies and market correlations, it was therefore impossible for China A shares to escape from a beta drawdown during this global sell off despite the country’s improving conditions domestically. As a result, we saw LowRisk/LowBeta and Value factors outperformed during the month, while ProductivityGrowth – associated with some of the high beta sectors such as healthcare and technology – experienced a reversion in March.   Size also showed strong rebound in March, owing to a combined effect of strong domestic fund flows into new economy and tech -related mutual funds and ETFs, and a significant drawdown in the megacaps which consists of many banks and financial industries.

Compared to the US and global markets (-20% and -21% in Q1 respectively), China A shares suffered the least in Q1 but the CSI 300 also went down for 12%.  Yet notably, the CSI Caixin Rayliant New Economic Engine Index, tracked by our 3173 HK/9173 HK, had a drawdown of only 4% in USD terms owing to its new economy sector exposures, as well as its Quality and ProductivityGrowth factor tilts within the new economy universe. The Premia CSI Caixin China Bedrock Economy ETF, on the other hand, slightly underperformed the CSI 300 throughout the entire quarter due to its Value exposure.  Nevertheless, Bedrock Economy’s exposures to Value and LowRisk factors did contribute to its outperformance in March while all other indexes suffered a double-digit drawdown (Figure 2). 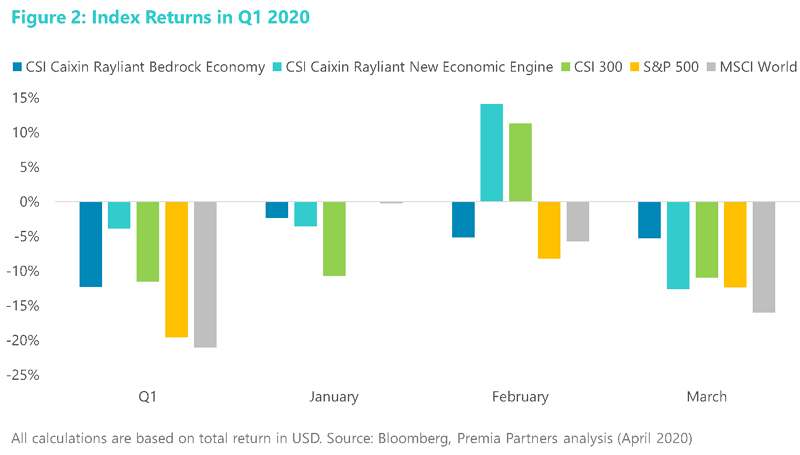 TWO TALES OF ECONOMY AMID THE COVID CRISIS: A SECTOR LEVEL DRILL DOWN

While the overall market beta suffered significantly, a closer look at the sector level would reveal two tales of economy amid the crisis – and the trend is not too different in China vs. in the US.  (Figure 3)

Healthcare, an industry that plays crucial role in fighting the global pandemic, was unsurprisingly the best performing sectors in Q1 and the only sector with positive return. The Technology sector was the strongest in January and its momentum continues into February due not only to the overall new economy growth in the China A shares market, but also the increased demand and online traffic since the CNY holidays as we discussed in the tech-enabled CNY holiday piece.  In addition, the digitalization trend has been moving from the consumer space to enterprise solutions (e.g. remote working) and data infrastructures.

With concerns about global supply chain disruptions, IT and Communications experienced a reversion in March along with the industrial sector. On the other hand, Consumer Staples saw a confidence pickup as domestic consumption resumes and domestic brands are filling much of the demand gaps that were previously imported. 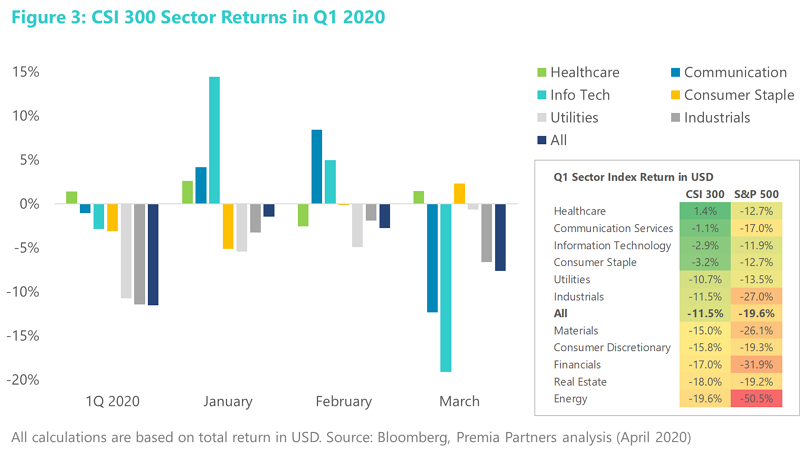 Typically, factors would not work very well in extreme market conditions as all risk assets tend to move in one direction. In the first quarter, while we saw ProductivityGrowth with outstanding performance, it is fair to attribute at least partially this risk premium to the factor’s cross-sectional correlations to new economy sector exposures. That said, as the market sentiment calms down with a hopefully flattening COVID case curve globally, we expect to see risk premia from quality -related factors as Q1 financial results gradually come out. There is risk of value trap during recession times, but much less likely for sectors and quality names with policy support. Compared to the US Fed, the Chinese government has yet fired all its bullets. So far, we have seen targeted liquidity relief benefits and SME support to the private sector, and the China A shares rebound post COVID-19 outbreak is more of a recovery than stimulus-powered boost. Therefore, we think the policy-supported sectors and companies with low operational drag stand better chances to outperform, and we expect both our Quality factor and ProductivtyGrowth factor to create positive contributions to our multi-factor strategies over the next couple of months.