China economy recovered faster than the rest of the world from the pandemic as shown by various economic indicators ranging from official PMI, GDP number, steel output, excavator sales, to traffic data. China’s solid macro recovery stands out from the rest of the major economies which either remain in a lock-down mode or simply begin to resume economic activities. That explains Chinese listed companies outperformed in terms of earnings and stock price performance.

China economy recovered faster than the rest of the world from the pandemic as shown by various economic indicators ranging from official PMI, GDP number, steel output, excavator sales to traffic data.  China’s PMI first rebounded to above 50 since March this year while GDP’s year-on-year growth has recorded 2.4% in the second quarter, up from the -6.8% in the prior quarter.  Steel production is hitting a record high in July responding to rising demand due to government infrastructure spending and reconstruction efforts in part of the country damaged by flooding.   Excavator sales went up 75% in June whilst the recent subway’s passenger traffic in core cities recovered to 70% of the pre-COVID level.  China’s solid macro recovery stands out from the rest of the major economies which either remain in a lock-down mode or simply begin to resume economic activities.  That explains why Chinese listed companies outperformed in terms of earnings and stock price performance. 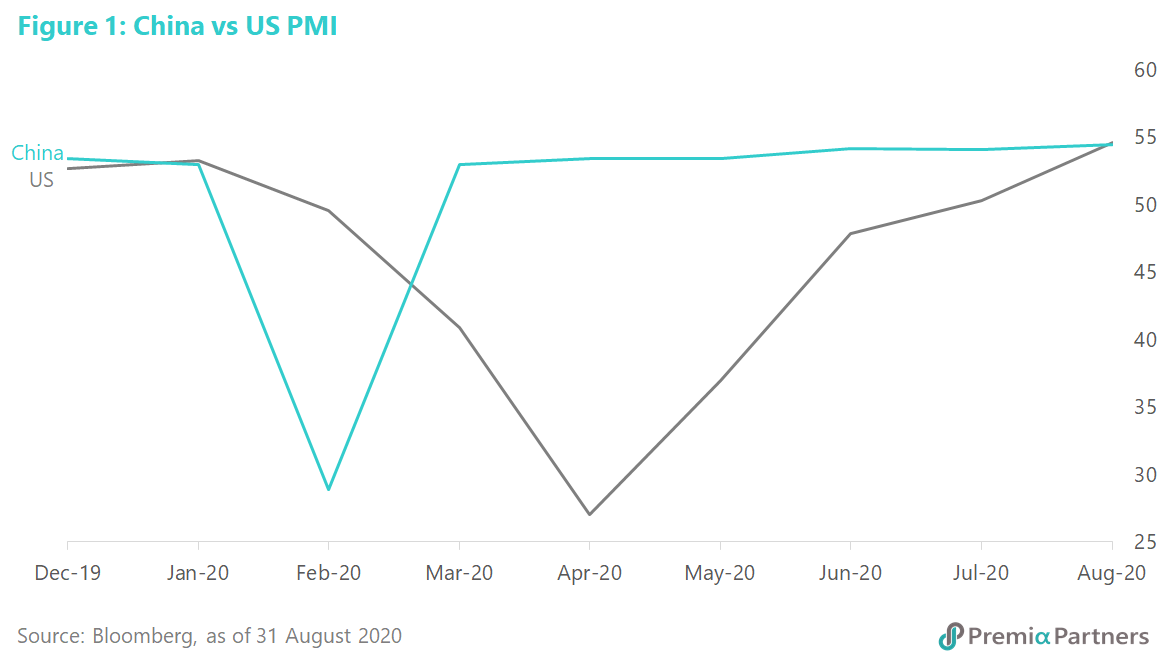 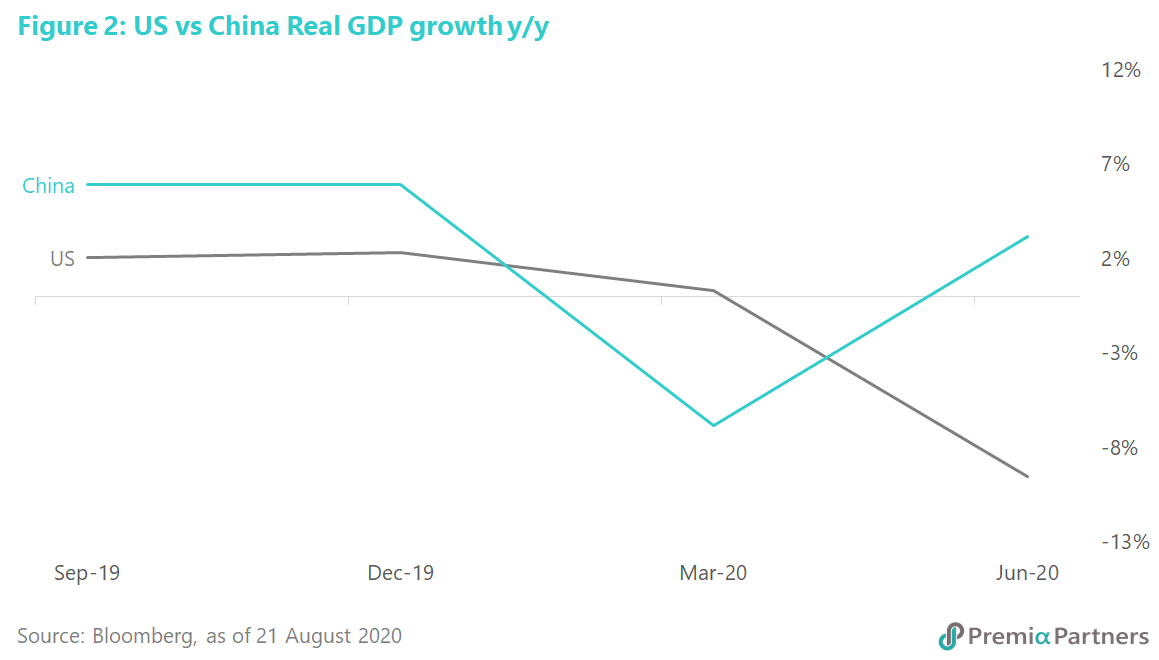 Taking CSI300 index as a reference, China A-share market has more index constituents whose earnings per share (EPS) managed to go up year-on-year in the second quarter as compared with the US market represented by the S&P 500 index.  Throughout 2019, the percentages of companies with a positive year-on-year growth in quarterly EPS were around the same level in both China and the US, with China usually enjoying a slight edge.  When the pandemic broke out in China early this year, A-share market took the hit first with a deeper dive in the earnings, and the percentage of companies with EPS growth dropped below the US market.  However, as China controlled the spread of the virus rapidly and effectively, the percentages of China A-share with EPS growth quickly rebounded back to around 60% recently, almost back to the level before the pandemic.  On the other hand, the effect of the pandemic still lingered in the US market as its percentage stayed at around the same level so far this year. 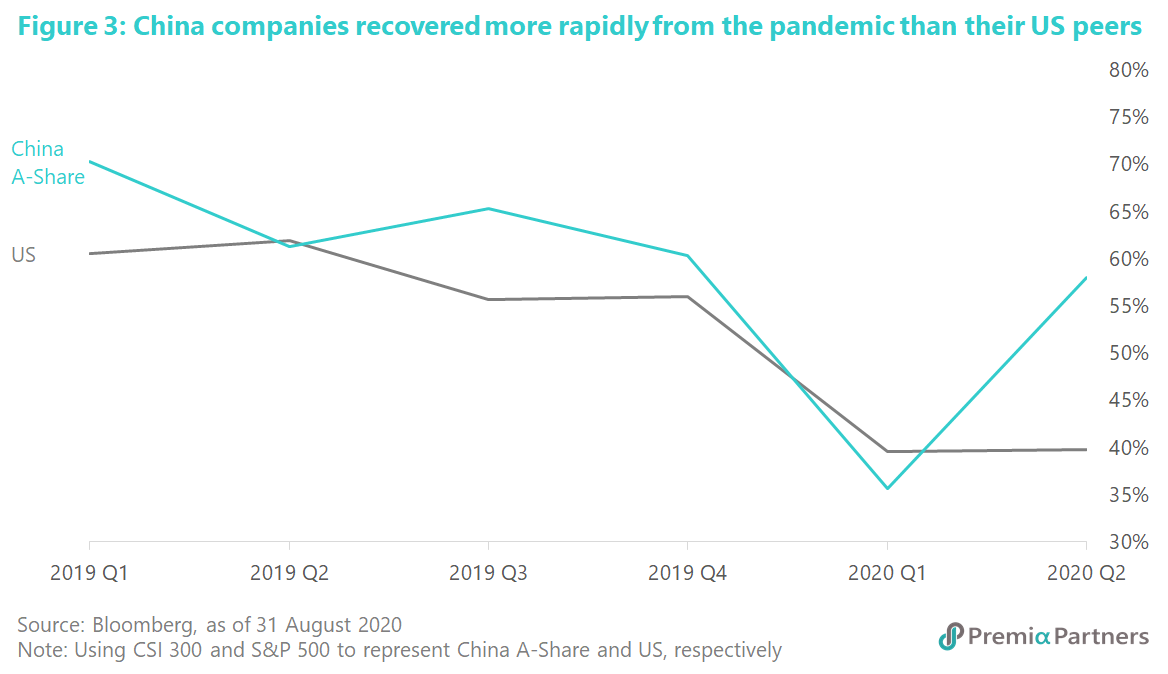 Indeed, the sharp earnings recovery of Chinese listed companies happened across all sectors.  If drilling down to the industry level, all sectors in China A-share market recorded higher percentages of companies with a positive EPS growth than the US market’s.  It is not surprising that Utilities and Consumer Staples topped the list with the highest percentages as these two industries are rather immune from the pandemic and their earnings are inelastic in nature.  Interestingly, Health Care and Information Technology were the other two sectors which stayed above the aggregate level.  The former benefits from the rising medical needs fighting against the virus including vaccine, drugs, equipment and test kits, while the latter takes advantage of the massive investment in the new infrastructure initiatives such as data centre, artificial intelligence, 5G network and semiconductor.  The strong recovery in these two industries are in line with the latest policy directed by President Xi, who said China must vigorously enhance the capability to conduct innovation independently, using technological self-reliance to counter a more hostile external environment. 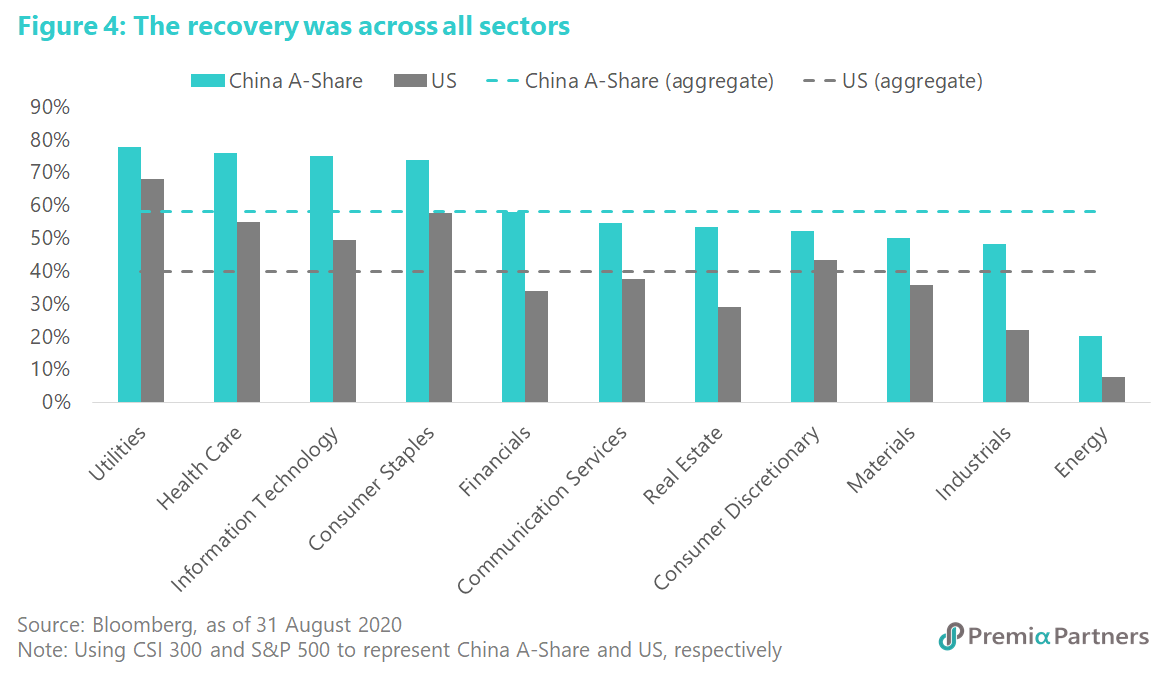 One data point worth highlighting is about Financials in China market.  This sector seemed to do well with close to 60% of companies reporting earnings growth.  In fact, diversified financials, or securities firms in essential, did a heavy lifting since only 15% of Chinese banks were able to record a positive EPS growth in the second quarter.  The disappointing results of China’s largest state-owned banks confirms our belief that the banking industry is sacrificing themselves to support the real economy as requested by the authority.  Chinese banks are now struggling with compressed net interest margins, increasing non-performing loan and falling core tier-one capital.  Moody’s Investors Service expects a considerable lag time before non-performing loan metrics fully capture the increase in loan delinquency pressure.  It is foreseeable that the sector may face further deterioration in asset quality. The regulator says that about 4% of the industry’s troubled debts have been deferred, equivalent to ~RMB 7 trillion of loans headed for delinquency and put on hold until next year.  It is early to say that the Chinese banks are out of woods. 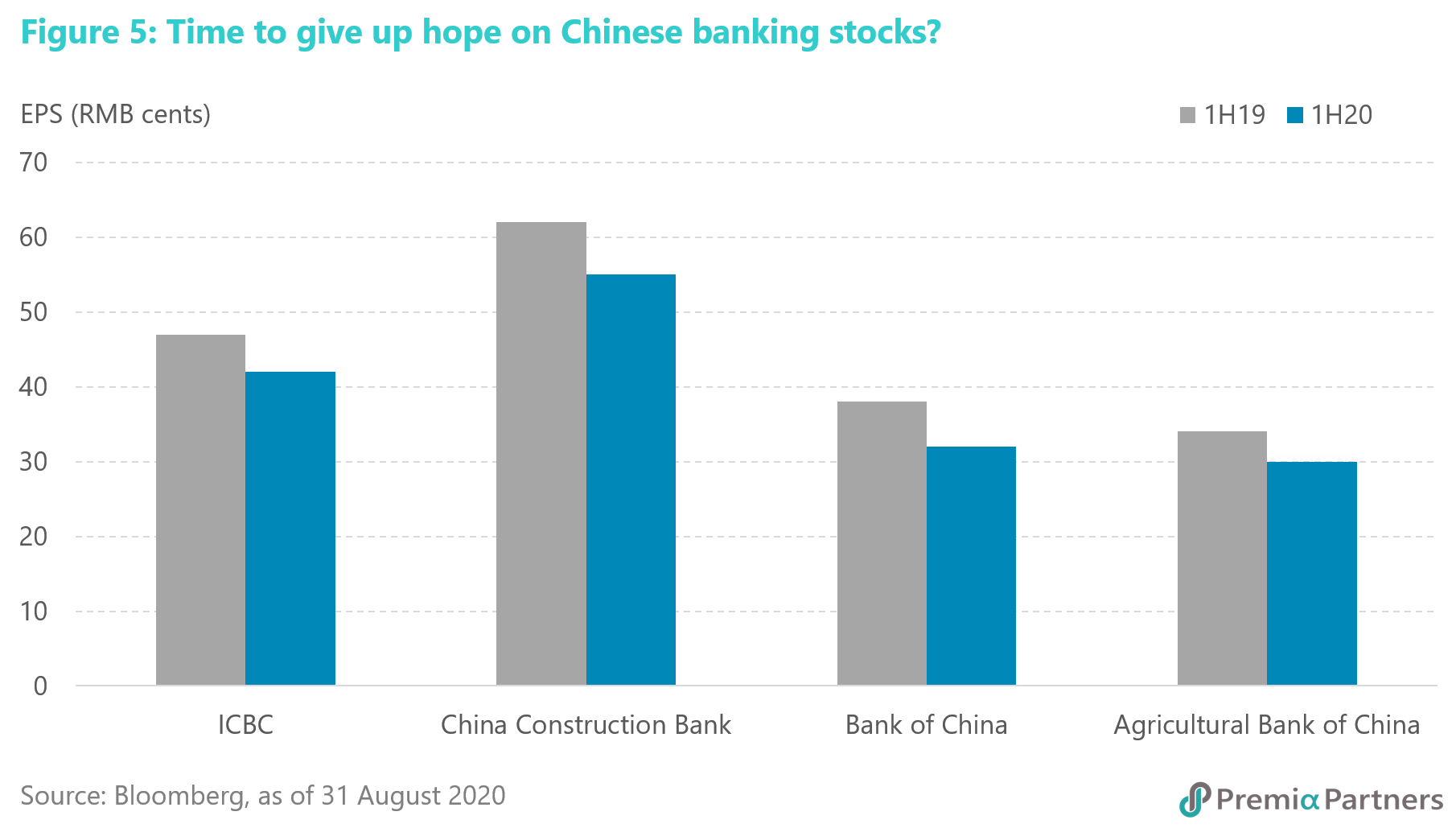 Stock performance is usually going together with the underlying earnings growth.  At the beginning of this year, A-share underperformed the US as China was hit hardly by the pandemic and the percentage of companies with earnings growth fell behind.  Starting from July, A-share began to outperform the US significantly as investors showed confidence that China’s successful control of the virus would help the domestic companies recover their business eventually.  That turned out to be the case when A-share market reported a higher percentage of companies with earnings growth in the second quarter. 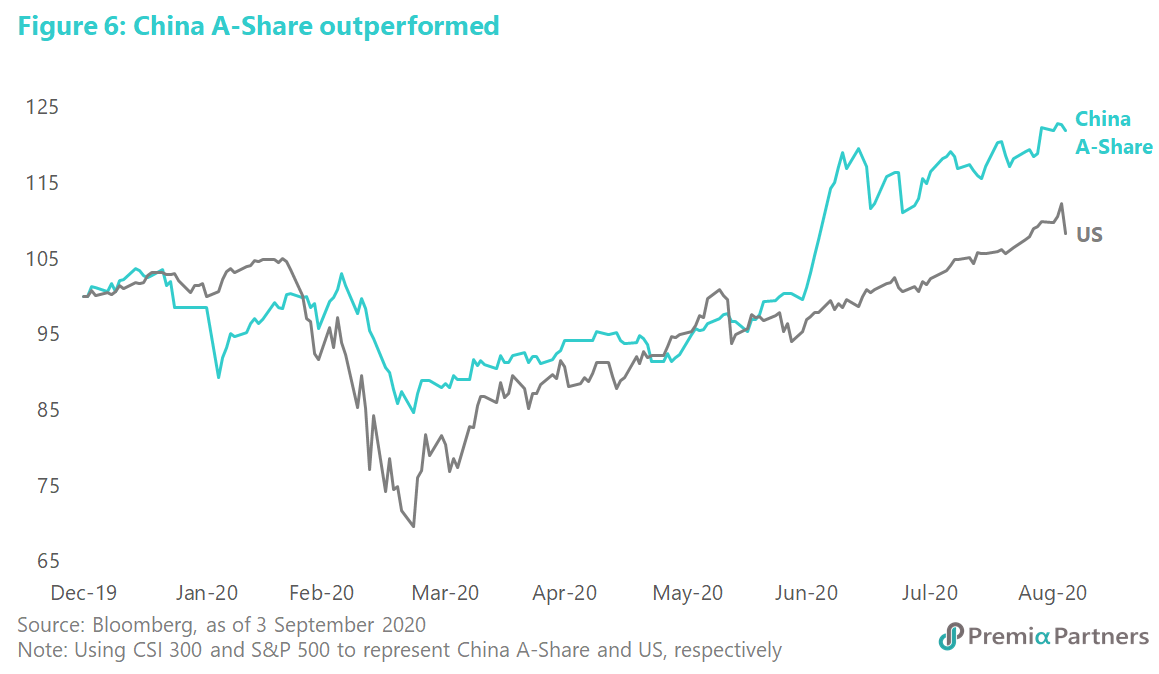 Specifically, the picture also looked quite different between New Economy and the mainstream indexes within the A-share market.  New Economy, represented by CSI Caixin Rayliant New Economic Engine Index, outperformed the large-cap CSI 300 Index and the mega-cap FTSE A50 significantly.  The performance did follow the earnings recovery pattern as New Economy sectors like Health Care and Information Technology showed the highest percentage of companies with EPS growth. 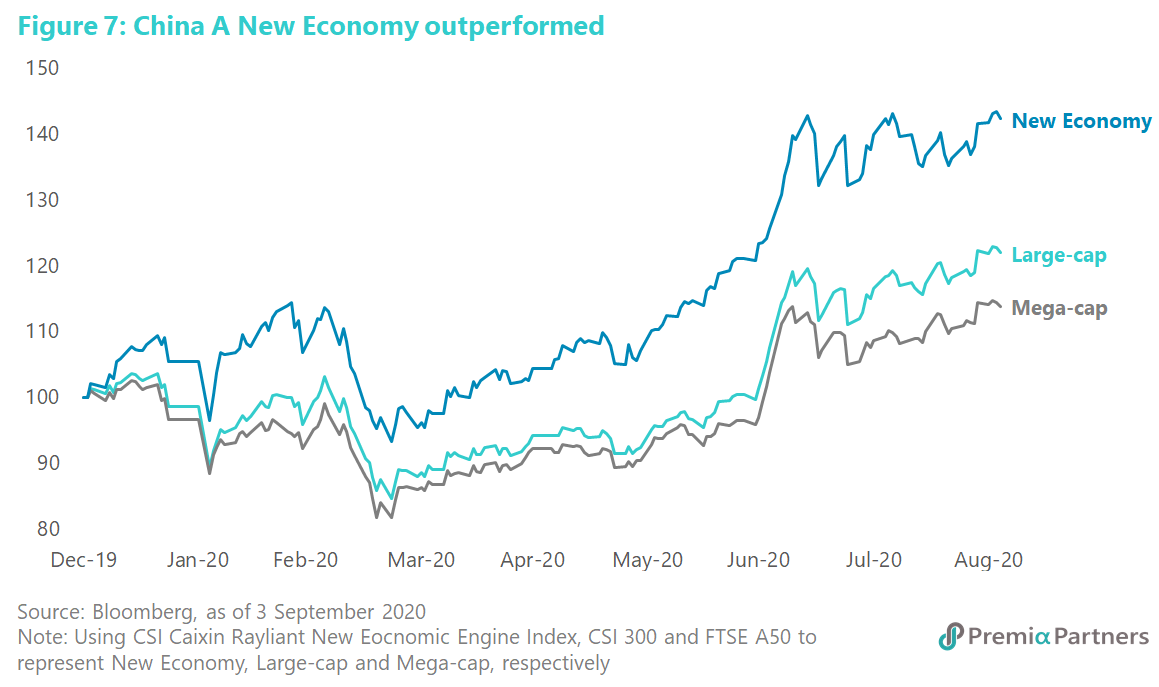 Looking forward, the earnings forecasts from the sell-side analysts seem to support a continuous outperformance of China A-share over the US market for the rest of the year.  For example, the percentage of companies with earnings growth will be 50% for China A-share versus 40% for the US in the third quarter, and then 57% versus 43% in the fourth quarter.  Investors who would like to capture this opportunity can consider investing in A-share through Premia CSI Caixin China New Economy ETF, which offers a diversified exposure among new economy stocks leaning quality and growth.

The Great Divergence between China and other Emerging Market economies
China: Signals from the investment surge
China: Set to overtake the US economy sooner than expected
Look East
China A Factor Review 3Q 2020