Insights from the revenue forecast in China market

With the current risk-on sentiment, it is reasonable for investors to look for growth area in the market. Yet, which sectors in China A-shares offer higher growth in 2020 based on the consensus forecast from the sell-side analyst? It would be essential to know beforehand for investors in allocating their assets in China market. That said, does it mean that anything outside the growth segments is not worth investing? Since China has been emphasizing on quality instead of quantity under the structural change of the economy, is it probable that there could be some hidden gems in the stable or slow-growth industries? We will try to answer these questions in this article.

By using CSI 800 as the universe and comparing the analysts’ estimations on the revenue growth for 2019 and 2020 for each sector, we could see that all sectors have positive growth rates in both years. The rate of change in the growth rate, however, is not consistent. Some sectors gain momentum and have a faster growth rate, while some may slow down substantially. If taking 3% as a threshold, which is slightly higher than the median of the rate of the change, we would see Health Care, Information Technology, Communication Services and Consumer Discretionary offering a meaningful incremental growth.  Coincidently, these sectors are always referred as “New Economy” in the market. 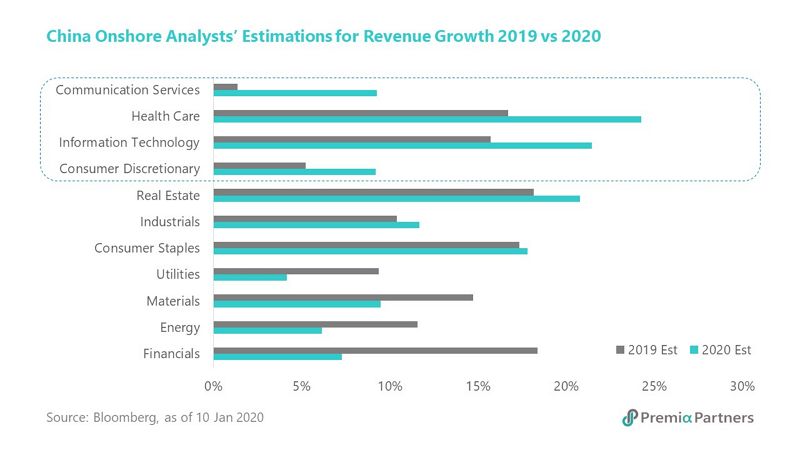 Why do analysts expect that these sectors grow faster in 2020? For Health Care, even though China has implemented a government bulk-purchase program to lower the price of generic drugs, analysts still think the industry is in a good position to benefit from innovation drugs’ development, urbanization and ageing population. For Information Technology and Communication Services, the major drivers are tied with China’s plan in introducing 5G services in most of its cities by the end of 2020, leading to significant investments in telecom infrastructure upgrading and eventually promoting new business in entertainment and gaming via mobile devices. Consumer Discretionary may benefit from the continuous tax reforms which help reduce personal tax, so that individuals may have more disposable income to spend on discretionary items.

Investors who want to capture the “New Economy” theme may invest in these sectors, or even pick the potential outperforming stocks within these sectors. Another choice would be Premia CSI Caixin China New Economy ETF. Although the ETF’s underlying index methodology does not intend to select stocks based on the above classification, the ETF captures the above theme quite well and has a total of more than 75% weightings invested in these sectors. The ETF may even be able to pinpoint the “New Economy” stocks as it looks into the CSRC Industry Classification and identifies which industry belongs to the new economy focusing on skilled talents, advanced technology, light assets, substantable growth and policy supports. Furthermore, the ETF would narrow down the selection by their non-fixed asset, debt coverage, cash ratio, net profit margin, accruals efficiency and net operating assets to weed out the potential laggards.

On the contrary, Financials, Materials, Energy, and Utilities are expected to have some growth, but the rates are diminishing. Financials companies’ growth rates are mainly dragged down by Chinese banks as the interest rate spread is tightening. Brokers, however, may perform better than the whole sector as China is revising the Securities Law to adopt registration-based IPOS and to allow the brokers playing a greater role. Materials and Energy are more cyclical in nature.  It is not surprising that their upcoming growth will decelerate after recording a relatively strong growth in 2019.  Having said that, apart from their own business cycle, these sectors are also highly affected by geopolitical risks, such as the oil and gold price spiking up when the U.S. launched a drone strike to Iran, which may lead to a deviation from the analysts’ expectation.

In order to relieve the pressure faced by small-mid caps and households resulting from the trade war, China may limit any price hike among Utilities, leading to a potential lower growth rate. There are two sides to every story. If Utilities is the victim under China’s current stimulus plan, Industrials maybe the beneficiary as the latter can be benefited from the lower utlitiliy costs. Chinese government also studies and implements measures to ease financing costs for small-mid caps. As a result, analysts expected Industrials to be able to maintain a higher growth rate in 2020, but the increase is only moderate at a rate below 3%.

Consumer Staples and Real Estate are similar to Industrials which do not have a significant incremental change in the growth rate. That said, Consumer Staples is a borderline case under this classification. Should its growth rate not dragged down by Kweichow Moutai’s lower-than-market-expectation guidance for 2020 sales target, Consumer Staples may have an increase in growth rate comparable to “New Economy” sectors. As China undergoes the interest rate-cut cycle, Real Estate’s growth rate is also expected to have a slight increase from 2019.

Up till now, one may think that there seems to have not much investment value in these seven unexciting sectors. Growth is not the only factor in investing though. Recently, investment guru Peter Lynch told Barron’s that he likes energy stocks in 2020, and his philosophy is as follows. Since “everybody’s assuming the world’s going to not use oil for the next 20 years, or next year”, the energy stocks prices are distressed and attractive, and he is buying companies that he “doesn’t think will go bankrupt.” Similar logic could be applied to the above mentioned sectors as well. Many companies of them actually form the backbone of China economy, and their business is usually hard to be replaced in near future.  In terms of earning yield, most of these backbone sectors manage to meet or beat the median, showing their attractiveness in terms of valuation. 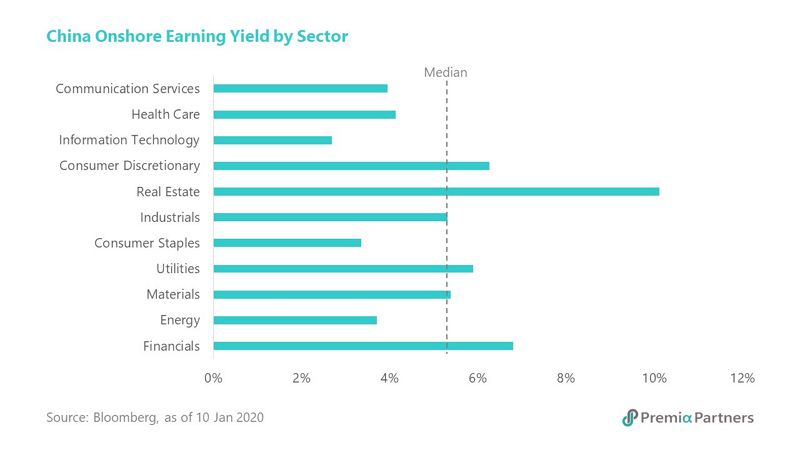 In addition to the enticing valuation, most of these backbone sectors have a lower beta in general. Under any unpredictable condition such as US-Iran conflict and trade wars, investors with a more defensive mindset may find these sectors offer alternatives for the purpose of lower volatility and less downside risks. Similar to Premia CSI Caixin China New Economy ETF, Premia CSI Caixin China Bedrock Economy ETF does not intend to build the portfolio using the above classification, but the ETF has a high coverage on these backbone sectors of over 82%. Again, the ETF provides an extra margin of safety to investor by narrowing down the stock selection from three aspects: company size (total assets, owner’s equity, and operating income), financial health (debt coverage, cash ratio, net profit margin, accrual efficiency and net operating assets), and low risk (volatility, beta, and semi variance). 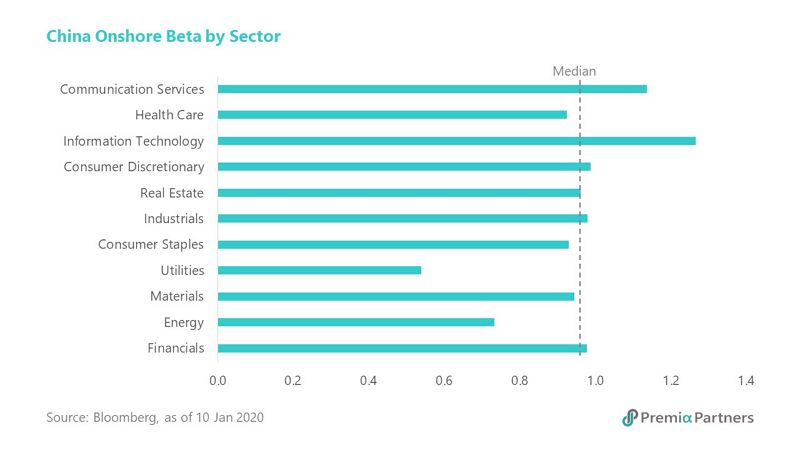