According to the United Nation Environment Programme, an inclusive green economy is an alternative to today's dominant economic model, which exacerbates inequalities, encourages waste, triggers resource scarcities, and generates widespread threats to the environment and human health.

According to the United Nation Environment Programme, an inclusive green economy is an alternative to today's dominant economic model, which exacerbates inequalities, encourages waste, triggers resource scarcities and generates widespread threats to the environment and human health. On the surface, the concept of green economy seems contradictory to the principle of the stock market, but it has emerged as a key megatrend that not only is supported openly by the governments globally but also embraced willingly by the equity investors.

In the past, the green initiatives were mostly raised by the regulators/academics in the developed countries, but they seldom translate into trading ideas. Investors simply saw the costs outweighing the benefits, passing most opportunities with the concern of unnecessary operational burdens, unproven business models, or unachievable targets under consistently delayed timeframes.

With technology breakthroughs, imminent climate changes and the latest pandemic, green economy is shifting from a hypothetical scenario in a perfect world to a sustainable investment theme in the capital market.

The period between 2010 and 2019 is the warmest decade on record. The global temperature is expected to increase by 3 to 5 degrees Celsius by the end of the century if following the current trajectory of carbon dioxide emissions. To avoid the deadly outcome of warming weather, the world will need to decrease fossil fuel production by roughly 6% per year between 2020 and 2030.

The main driving force for change will be made at a national government level, such as through legislation and regulations to reduce emissions. According to the United Nations, more than 110 countries have committed to becoming carbon neutral by mid-century. They represent more than 65% of global carbon dioxide and more than 70% of the world economy. President Biden’s intended recommitment of the United States to the Paris Agreement on climate change and his plan calling for “a clean energy revolution and environmental justice” should look promising to the development of the industry.

Asia will likely play a key role this round. China, the world’s largest emitter of carbon dioxide accounting for a share of 28%, has promised to become carbon neutral before 2060, and to begin cutting its emissions within the next ten years.

The ambitious pledge committed by President Xi came as a surprise. Beijing has set an interim goal of reaching peak carbon emissions before 2030, followed by more aggressive measures to hit the ultimate target in the next few decades. Its strategy includes encouraging private investment in climate-friendly projects, reducing car emissions and promoting electric vehicles. Both Japan and South Korea, the fifth and seventh largest greenhouse gas emitter, announced to become carbon neutral by 2050 as well. Japan has struggled to cut emissions since the 2011 Fukushima meltdown forced the closure of dozens of nuclear reactors, only a small number of which have restarted. It would speed up research and development on key technologies such as next-generation solar batteries and carbon recycling, and promised to fundamentally change the nation’s long-term reliance on coal-fired energy. 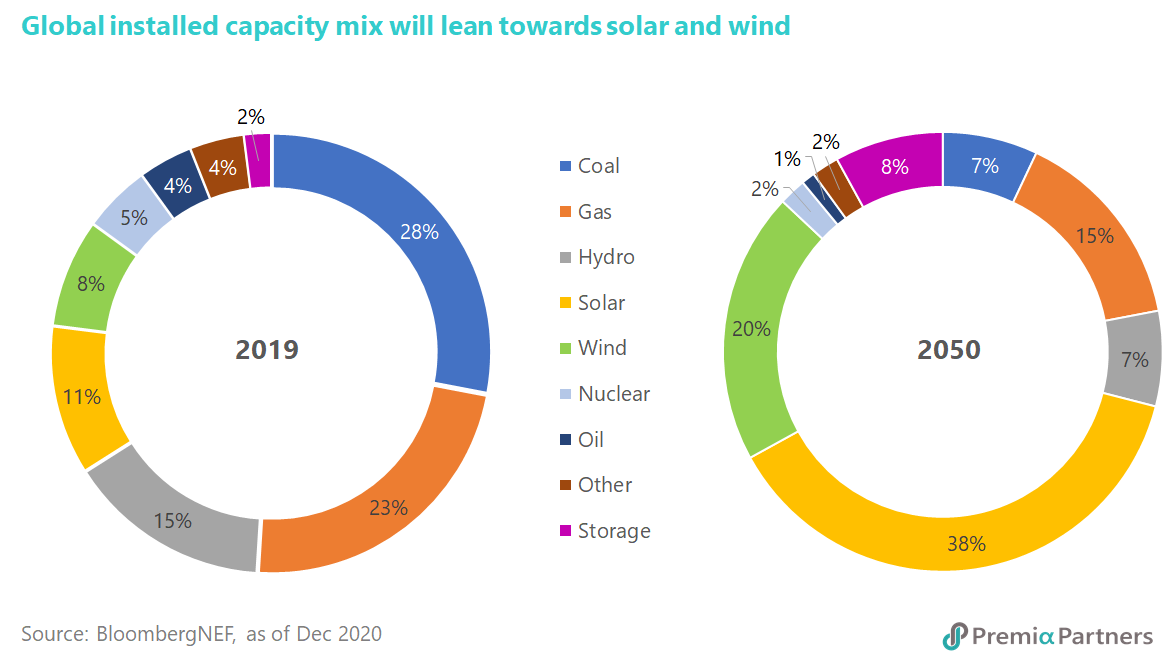 The move towards green investing is making a record in asset management, as investment in ESG-oriented or sustainable funds topped USD 1.2 trillion in 2020. Instead of being a short-term trading gimmick, green investing is fast becoming part of the mainstream. Morningstar believes that investor interest is growing, partly because the disruption of the Covid-19 crisis highlighted the importance of building sustainable and resilient business models. 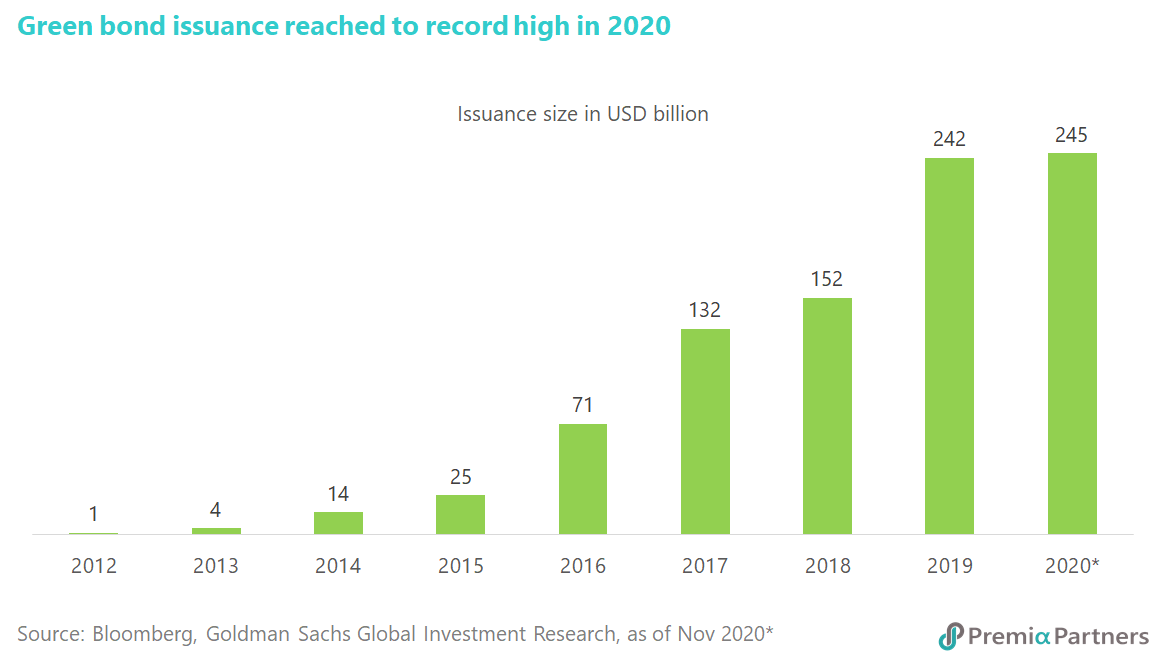 Within the greater scheme of green economy, Jefferies strategist explicitly highlights the following investment themes in the equity market:

Future of mobility. By 2050, the way in which transport is delivered and paid for and the way in which vehicles are propelled and driven will change. In efforts to mitigate the megatrend of climate change, there are increasing pressures being placed on cars utilizing internal combustion engines (ICE). China, Japan and many western European countries will ban any new sales of ICE vehicles by 2035.

Water scarcity. Growing populations and changes in energy production and consumption can start to put a strain on the supply of natural resources such as water and rare earth metals. This theme will cover companies in water and wastewater utility, manufacturing of water drainage structures and supplies, designing advanced water system solution that enhance and ensure quality, safety and flow control.

Food transformation. Global food production is one of the many human activities that is placing significant pressure on the Earth’s ecosystems. These issues are driving consumers and scientists to seek alternatives and has given rise to a growing trend to change what we eat and how we grow / produce that food. Investors are excited about the plant-based meat and the vertical integration from farm to table. 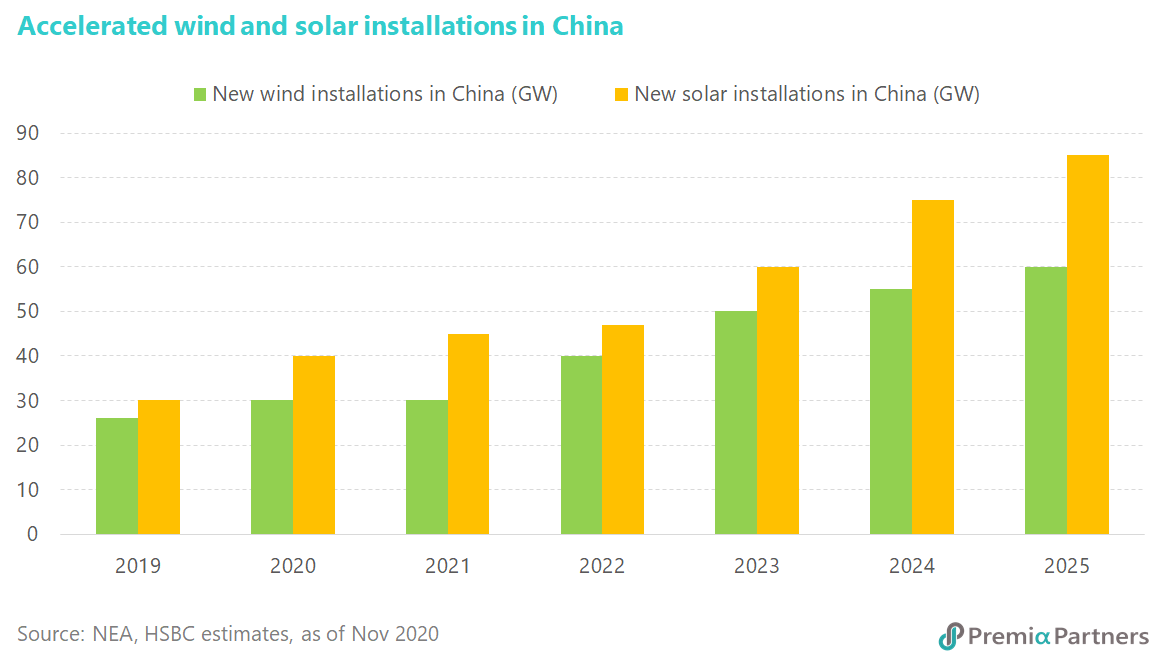 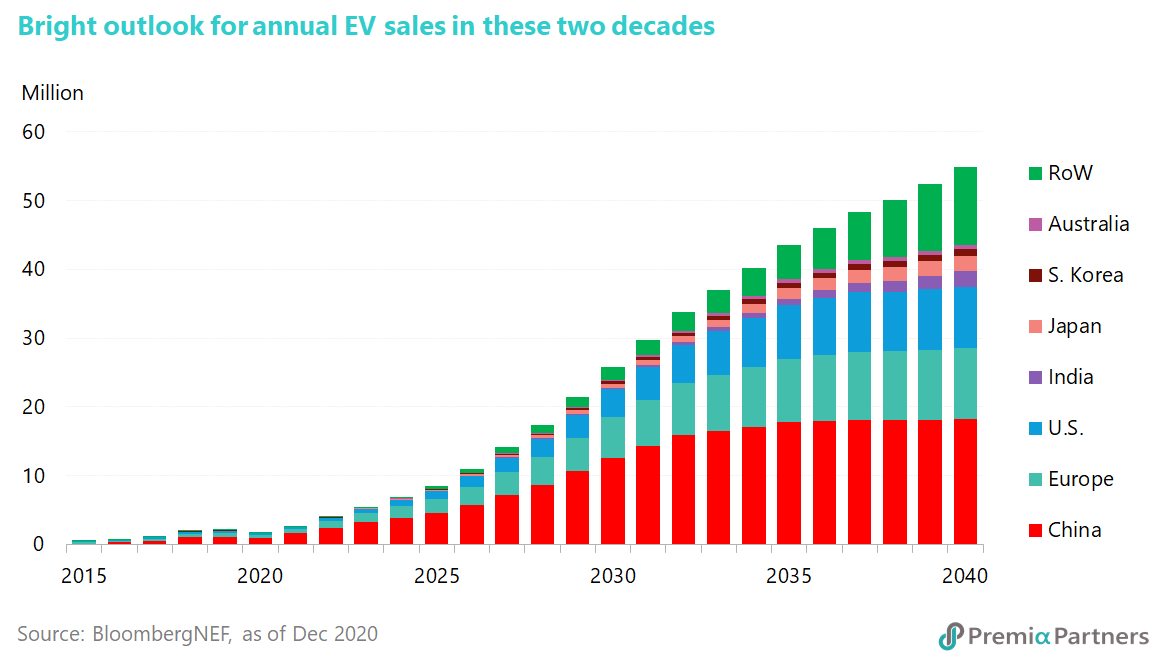 At Premia, our China New Economy ETF (3173.HK) and Asia Innovative Technology ETF (3181.HK) do include the stocks that benefit from the increasing interests in green economy. For example, both CATL and Longi Green Energy are the top holdings of these two ETFs. The former is one of the world’s largest electric vehicle (EV) battery manufacturers with a market share of 25.8% and works with over 20 largest automakers including BMW, Volkswagen, Volvo and Tesla. The latter is a leading mono-crystalline solar module producer that should take advantage of the extensive solar installation in the next 5 years according to the 14th five-year plan.