Getting behind the recent market falls

The recent falls in equities were more than just about the US Federal Reserve “disappointing” the market with its rate guidance. Equities bulls got the 25 basis points cut they expected. But they wanted more – they wanted Jerome Powell to assure them there will be many more to come.

And while President Donald Trump didn’t help by ratcheting up the trade war with China, you couldn’t say that was totally unexpected either. Indeed, I had been saying that the so-called “ceasefire” promised by the US President at the G20 meeting in Osaka was not even a truce. It was a temporary freezing of the conflict at existing levels, with the potential for escalation later.

In short, good enough is not enough for the market. It wants perfection. Why not?  US stocks have been priced for perfection.

Nevertheless the global economy had been weakening while stock markets were pushing higher. Perversely, equities were moving higher because economic fundamentals had been deteriorating. This is bad news as good news, as the global economy fumbles along, with growing uncertainties heading into 2020.

China just reported the slowest economic growth in 27 years for 2Q19 – at 6.2% y/y versus 6.4% for 1Q19. This is not all cyclical. There is a structural element to the story too. But whatever the story behind the data, the slowdown has impacted and will continue to affect world economic activity.

Singapore – often described as the “canary in the coalmine” for world trade – turned in an annualised 3.4% GDP contraction in 2Q19 over the previous quarter. This was the worst GDP figure since 2012.

Reflecting the same trade drag, the Japanese Government has downgraded its forecast GDP growth for the current fiscal year (ending March 2020) from 1.3% to only 0.9%. But the private sector is only expecting 0.5% growth, according to Japan’s Cabinet Office. This suggests a recession in Japan this year.

Indeed, Japan may already be in the midst of a recession, which may be confirmed only later this year. Japanese GDP contracted 0.4% in May, according to estimates from the Japan Centre For Economic Research. The economy was dragged down by external demand which fell 120 basis points amidst falling export data. Exports fell again in June – by 6.7% y/y, following a 7.8% decline in May – making it the seventh consecutive month of falls in exports.

Euro Area GDP should come in around 1.2%--1.3% for 2019. But data suggests likely deterioration in the second half of this year, with the preliminary, “flash” manufacturing Purchasing Managers Index (PMI) falling deeper into contraction with a reading of 46.4 for July from 47.6 in June.

The US economy also slowed significantly in 2Q19, with growth down to 2.1% from 3.1% in the first quarter. While the economy is still growing, the market is surely aware that the Treasury spread between the 10 year and the 3-month bill rate is now negative. That is, the yield curve has inverted. The New York Federal Reserve has assigned a 32.88% probability of a recession by June next year. That was where we were around August of 2007, just before the start of the Great Recession.  The market is also surely aware that over the past half century, every time that spread goes over 30%, the US has had a recession. Indeed, this is so well known in the market, it just about elicits a yawn. 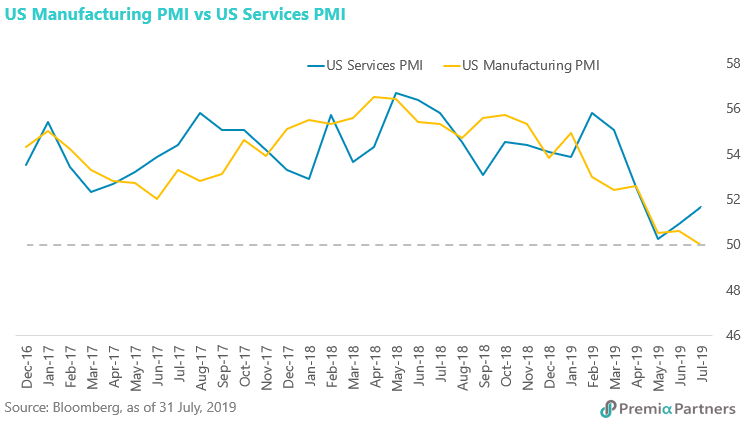 Long before the equities fall of recent days, various measures of market breadth suggested lack of broad participation in the rally.

Over the past 12 months, defensive sectors led the US market rally – with utilities up 17.1% for the 12 months to late July, and consumer staples up 17.0%. Yet, cyclicals lagged, with materials barely changed. Another divergence is between small cap/mid cap versus large cap stocks – with the Russell 2000 down around 3.8% over those 12 months. 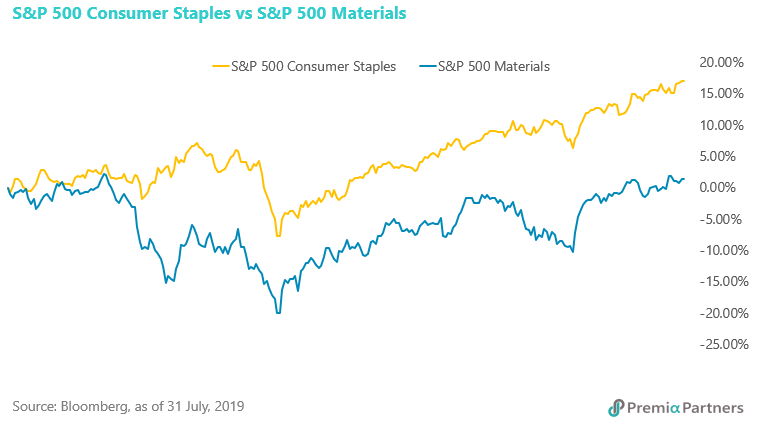 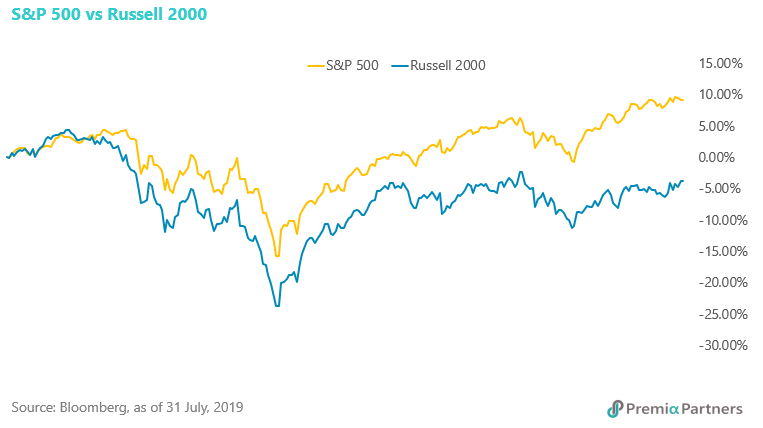 The ratio of consumer discretionary to consumer staples – which Jesse Felder of the Felder Report called his “equity risk appetite” measure – had been muted even as the S&P 500 index was pushing higher. In a similar vein, the CBOE VIX had generally been trending higher from early 2018 even while the S&P 500 was pushing higher, albeit with a lot of choppiness. This is in contrast with the decline in volatility in the US equities rally from early 2016 to late 2017. And as Felder also notes, the BBB corporate bond spread had also been generally rising since 2018 – that is, diverging from the “risk-love” in equities – even while the S&P 500 was rising.

Notwithstanding considerable nervousness among investors, the calculations of the bulls were that: 1) this time could be different because of likely renewed monetary stimulus; 2) even if it isn’t different, the US is still a good year away from a recession on historical indications; 3) traders can pick up some further gains and clear out before the bad stuff hits.

Well, the Federal Reserve has started to cut rates. Notwithstanding what Jerome Powell says the future is, the future path of rates is, as the Fed likes to say, “data dependent”.  Meanwhile, the European Central Bank will likely take its deposit rate deeper negative and renew quantitative easing.

The market’s calculation was that this should push yield deprived savers back into risk assets, bearing in mind the huge recent flows into bonds, and the rising flood of negative yielding bonds. That could still happen again notwithstanding the recent selling of risk. Bloomberg Barclays Index data showed US$13.6 trillion of negative yielding bonds worldwide in late July, more than double the US$5.9 trillion in October last year.

That explains the surge in gold from US$1186 per oz August last year to US$1425 late July. As rates go lower or indeed, deeper negative, gold is likely to continue higher. And of course, the point of all this is that, governments and corporations can then borrow even more than they have done over the past 10 years.

If you accept the logic that debt borrows from future economic activity, we are digging bigger and bigger holes to fall into in the future. But none of that constrained punters up until a week ago because their calculations were much shorter than that.

To repeat, of course the market knew the New York Fed’s recession probability calculation, and its historical significance. Yet, some thought this time would be different because of the likely resumption of monetary easing all over the world. Even if that failed to rev up the economy, there was still time to clear out of risk assets before the final denouement.

There could still be time after a brief sell-off. I won’t pretend to know if this is the beginning of that “final denouement”.

But I do believe that at best, this is like an accelerating game of “pass the parcel”. The players know the music will end soon. They therefore pass the parcel with increasing speed, to avoid getting caught when the music stops. Yet, the risks are rising rapidly. With the cyclically-adjusted price to earnings (CAPE) ratio for the S&P 500 reverting downwards from cyclical highs, market sentiment is fragile. The risk of an increasingly manic-depressive “Mr Market” being disappointed with Jerome Powell, Donald Trump or the economy, etc, is high.

So, what do you do if you are not into rapid games of passing the parcel? Here are some options: 1) Hedge out as much beta risk as possible through market-neutral long-short funds. 2) Seek out markets with low correlations to major markets – e.g. Vietnam. 3) Ride the return of monetary debasement through gold. 4) Keep your financial “powder” dry – park your cash in a short-duration, risk-free, instrument that pays you some returns while you wait for better valuations. With the yield curve inverted, an instrument tied to the short-end is preferred over the longer end. That is, prefer the 3-month over the 10-year.

China: Beyond Trade Deal Phase 1
2020 Stretching On a Rubber Band: Seeing Value In EM Megatrends
The Not So New, Very Abnormal
Navigating Turbulence – Six Strategies
Getting behind the recent market falls