EM ASEAN: The peace in the midst of the storm

“Think about what is happening worldwide right now. The US is dragging down global growth by attempting to impose trade tariffs everywhere, China is facing a major economic slowdown, Japan continues their third “lost-decade”, Germany is heading into recession, and the UK is still debating with EU about the way of Brexit. These are just the highlights of how the top five economies are doing, not even mentioning the more troublesome territories such as Italy and Argentina which may have to deal with their escalating debt problems. These markets accounted for more than 70%-80% of the global stock markets depending on which particularly benchmark one is using to measure against the performance. The issue gets more complicated when the US market, weighting over 50% in most clients’ equity portfolio, seems to be exhausted after recording the longest bull run in history whilst still hovers at all-time high. The most imminent question among investors is where to find the peace in the midst of the storm.”

What if there is a market with a low correlation with major assets, steady macro growth, supportive government policies, under-developed capital market, and a scalable domestic consumer market.  It may sound like a dream come true but it is exactly what ASEAN is offering at the moment.

ASEAN is expected to grow strongly with its GDP projected to reach USD 8 trillion by the end of 2030, becoming the world fourth-largest economy after the US, China and the EU.  The promising forecast is underpinned by the region’s demographic dividend and the emergence of a wealthier middle class over the next decade.  The International Labor Organization estimates that ASEAN will record the second-largest growth in labor force worldwide with nearly 59 million people projected to enter the job market by 2030.  By then, ASEAN will become the third-largest labor force worldwide, behind only China and India, accounting for a total of 10 percent of the global market.  With or without the trade war, the trend of supply chain relocation will favor ASEAN on the back of low operating costs and the vast workforce.  The market did not take it seriously when Sony declared to shut down their mobile phones manufactured in China and decided to move the operations to Thailand in early this year.  Then it turned to be a strong signal when Samsung, the world’s leader with the largest market share in mobile phone, finally ceased their last smartphone factory in China and instead expanded the facilities in Vietnam in October.  With trade activities kept increasing, ASEAN recently took over the US and became the 2nd most important trading partner with China.  The latest trade war certainly intensified the trading relationship between ASEAN and the US.  Within the region, Vietnam led the South East countries with a 33% growth in exports to the US in the first half of this year. 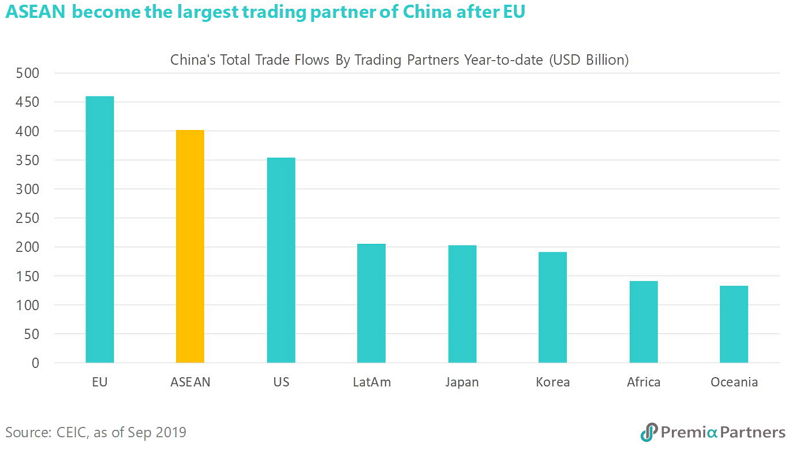 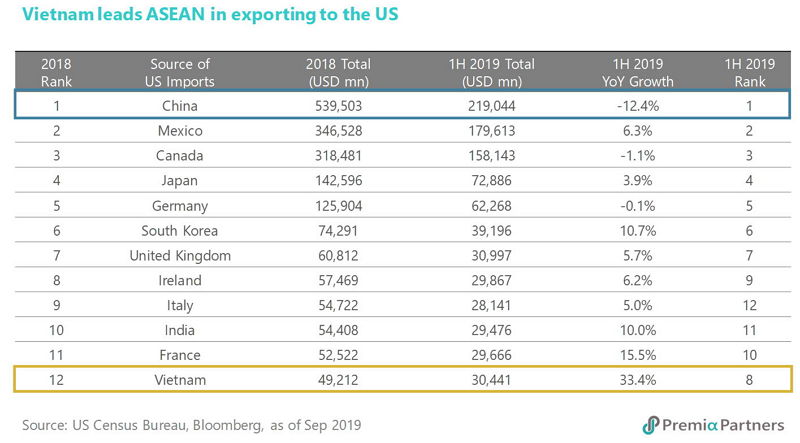 ASEAN is poised to witness the expansion of middle-income segment, increasing from 29% of the population in 2010 to over two-thirds by 2030.  This emerging middle class, which is the same as other consumers globally willing to pay for quality, convenience and choice, will drive the demand for domestic consumption in the coming years.  A few local brands are already starting to get recognized locally and internationally, such as Chang Beer in beverages, Indomie in instant foods, Jollibee in catering, Lotus in supermarkets, AirAsia in budget airlines, and IHH in medical services.  Internet connectivity also contributed to a significant change in terms of consumer behavior and induce consumption.  There are 360 million Internet users in the region and 90% of them connect to the Internet primarily through their mobile phones.  According to the latest e-Conomy SEA 2019 report released by Google, Temasek & Bain, internet economy of the region has soared to USD 100 billion for the first time in 2019, more than tripling in size over the last four years.  E-Commerce and ride hailing continue to beat the most optimistic of predictions, while online media and online travel keep growing at a steady rate with ample room to expand further.  By 2025, the Internet economy is expected to grow to USD 300 billion.  Currently the equity market may not offer much in the internet space, but a lot of unicorns like Gojek, Grab, Bukalapak, Carousell, Tokepedia, Traveloka, Shopee and Gobear will fill up the empty spot in ASEAN rapidly in the near future. 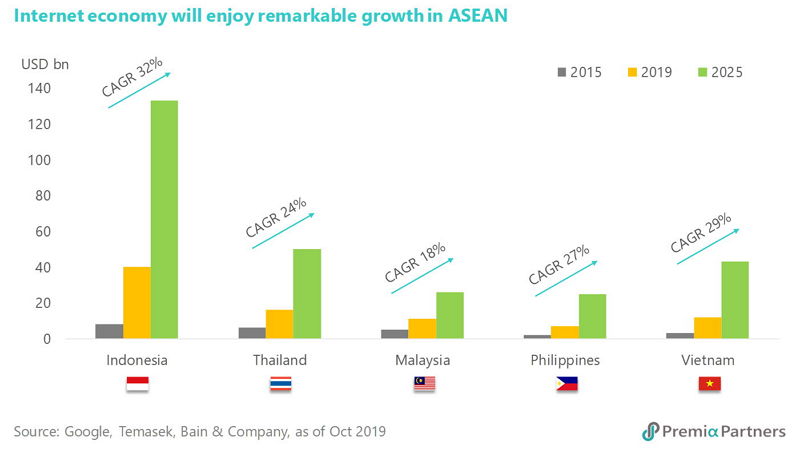 In addition to the exciting growth prospects, ASEAN equity’s low correlation with major international markets would make it become a valuable asset to help diversify investors’ portfolio.  It is particularly important when most assets classes including equities, bonds and commodities are getting increasingly correlated these few years.  Based on the return in the past 10 years, ASEAN has a correlation of as low as 0.3 with the US, 0.32 with Europe, 0.48 with Japan and 0.52 with China.  Interestingly, the correlation of different markets within ASEAN is also relatively low ranging from 0.08 to 0.56.  For investors looking for diversification and stability, investing ASEAN as a whole may offer more comfort whilst enjoying the potential upside compared to putting money into a single country in the region.  ASEAN has a lower maximum drawdown of -27.7%, which is a much smaller drop compared to Indonesia’s 41.7% or Vietnam’s 37.6%.  Besides, ASEAN manages to take advantage of the low correlations across different markets and delivers the 2nd lowest volatile performance among all the single markets except Malaysia.  If measuring ASEAN by the market cap over GDP, the ratio is 72.3% versus 147.2% in the US, 130.4% in the UK and 122.1% in Japan, indicating that ASEAN equity market is still underdeveloped and has enormous potential for future growth. 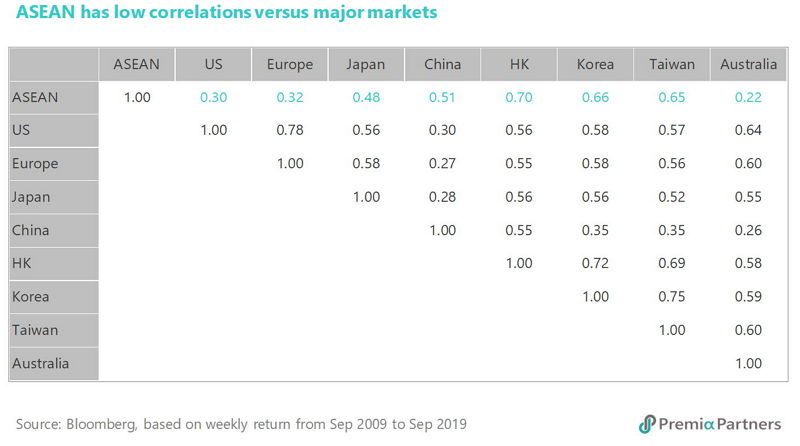 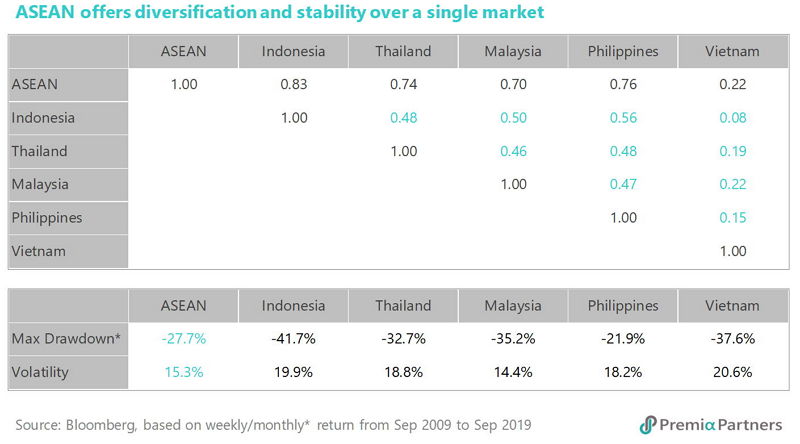 As major economies such as the US, Europe and China returned to the mode of monetary loosening in the past few months, the countries in ASEAN followed the same path with various levels of interest rate reduction.  Both Indonesia and the Philippines cut their benchmark rates three times with a total of 75 basis points, while Thailand, Malaysia and Vietnam all just did a single cut, trimming their benchmark rates by 25 basis points.  With the external headwinds remaining uncertain, all emerging ASEAN governments are trying their best effort to support the economies by relaxing the monetary policy and providing more fiscal aids to different industries.  Vietnam is expected to grow at the fastest pace among ASEAN countries with GDP forecasts of 6.7% in 2019 and 6.5% in 2020.  With the strong fundamentals and more accommodative policies, the emerging ASEAN currencies stayed strong with Thai Baht, Indonesian Rupiah and Philippine Peso even managed to appreciate against US dollar.  Malaysian Ringgit and Vietnamese Dong depreciated with a small magnitude, simply down by less than 0.8% and 0.1%, respectively.  Compared to the dismay performance of the major emerging market currencies like Chinese Yuan, Korean Won and Brazilian Real, the emerging ASEAN countries seem to gain more confidence from the global investors. 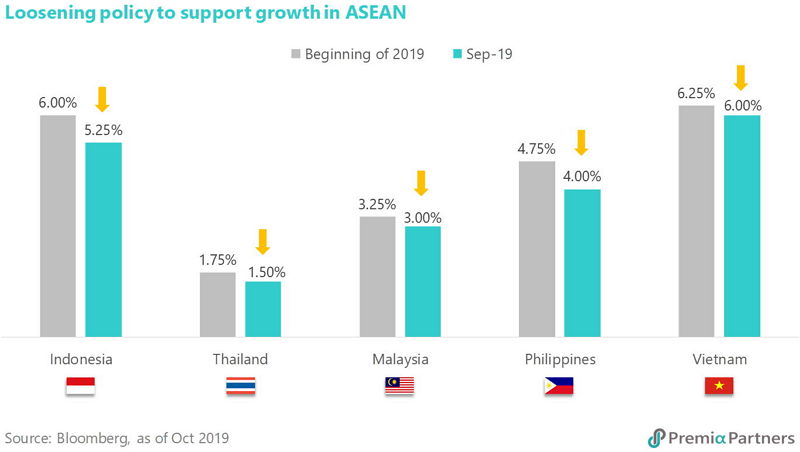 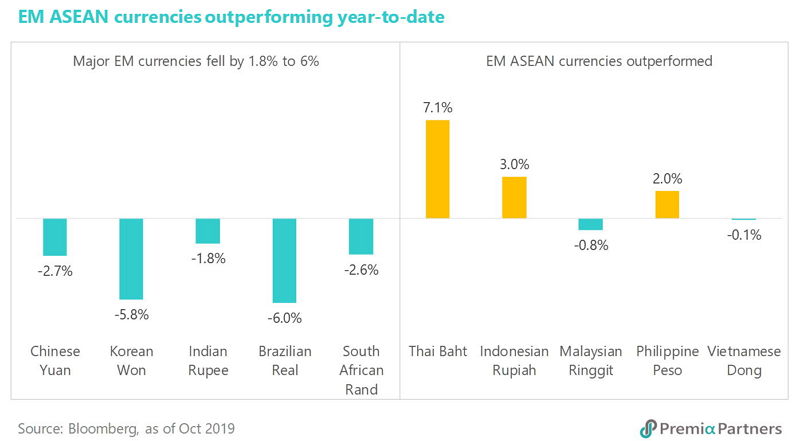 This confidence is also reflected in the equities market performance.  Since the launch of our Premia Dow Jones Emerging ASEAN Titans 100 ETF at the beginning of August last year, the underlying index has been outperforming both MSCI Asia ex-Japan and MSCI Emerging Markets by nearly 4% points up to mid-October.  The gap may remain intact and widen further as ASEAN continues to grow at a faster pace, so their equity markets offer investors a solid exposure for either a short-term tactical trade or a long-term asset allocation. 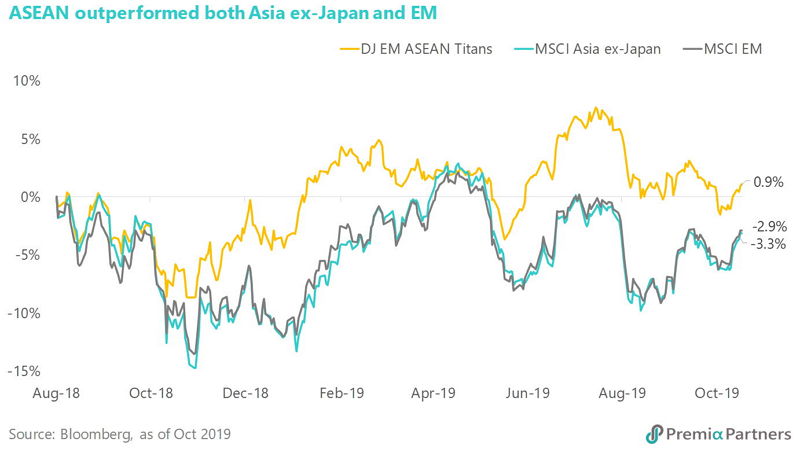