After a bull run of close to 40% that took most by surprise in the first quarter, trade uncertainties started to really weight on Chinese stocks during the second quarter of 2019. Unlike the beta-driven first quarter, all factors of our interest had positive performance in Q2 while the broad equity market ended roughly flat. But style factors alone are far from sufficient to explain (or reduce) the impact from the geopolitical shocks to the system as there had been much more intricate implications to one’s sector exposures; therefore, we also share a quick review of industry exposures in this piece.

After a bull run of close to 40% that took most by surprise in the first quarter, trade uncertainties started to really weight on Chinese stocks during the second quarter of 2019.  The US-China trade dispute was in center stage in May as the US raised tariffs on US$200 billion worth of Chinese imports, and Chinese stocks fell consequently.  In June, the easing of tension and agreement to a truce along with hopes of further stimulus measures led to a recovery, and losses were pared subsequently.

Unlike the beta-driven first quarter, all factors of our interest had positive performance in Q2 while the broad equity market ended roughly flat.  That said, the fast-moving rotation among factors so far continued during Q2 2019.  Value and LowRisk came out the strongest entering Q2 in April from their relatively deep negative territories, but the trend reversed in May.  Size, on the other hand, came short at the beginning of Q2 but returned strongly in May.  While the other factors bouncing up and down over the months in Q2, Quality factor picked up slowly throughout the second quarter.

For those looking for a refresher of the factor definitions, please visit our inaugural factor review on China A shares: How factors have performed in China A shares - roller coaster or Ferris wheel? 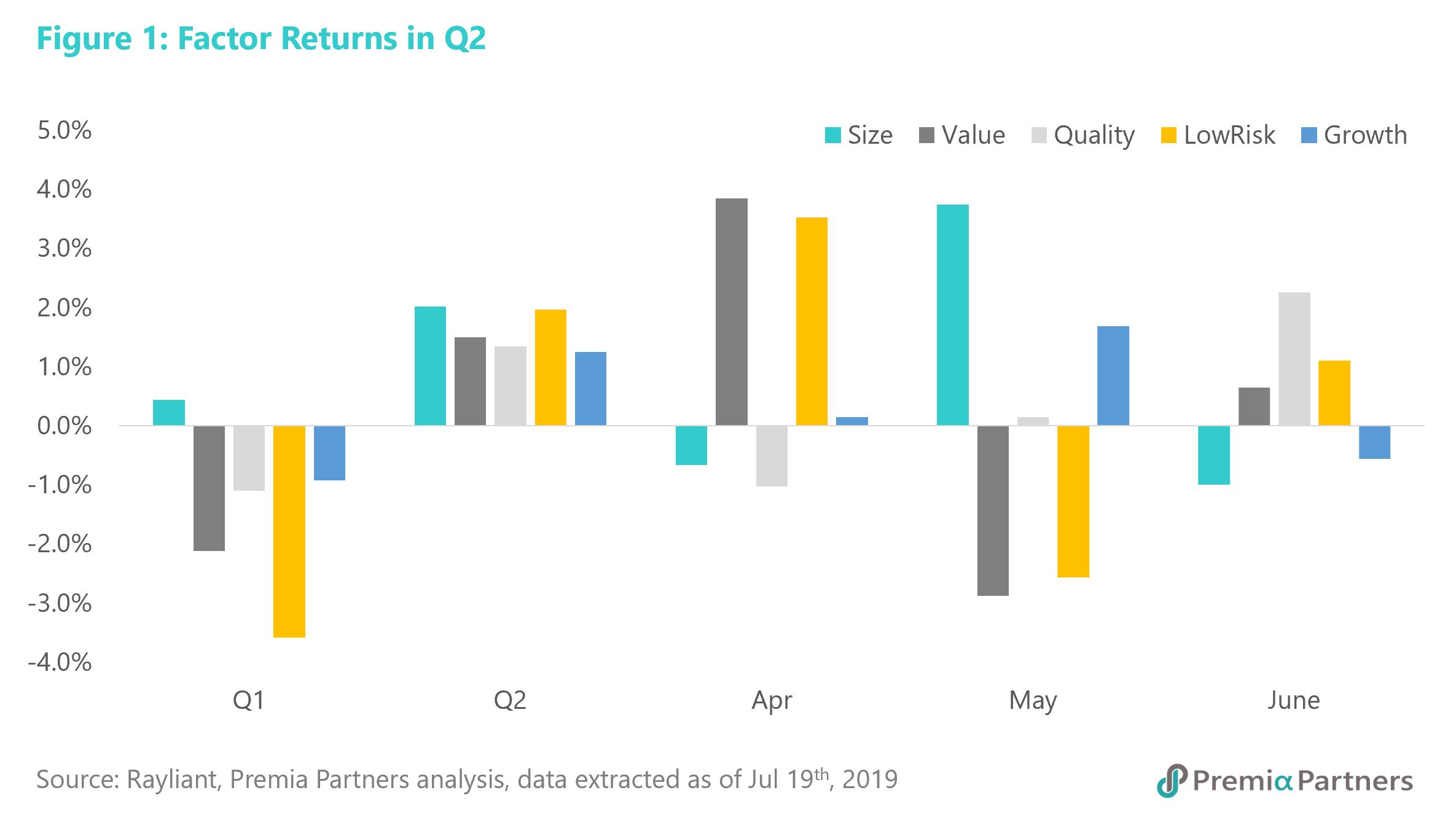 Style factors alone are far from sufficient to explain (or reduce) the impact from the geopolitical shocks to the system as there had been much more intricate implications to one’s sector exposures.  Therefore, in this quarterly review, I would also like to share a quick review to address the industry exposures.

In Figure 2, we see an astonishing plot where Consumer Staples driven primarily by the mega-cap liquor companies continued its momentum from Q1 and stood out as the only industry ended in positive territory in Q2 2019.  IT experienced a reversion in April after its 50% rally in Q1, and with little doubt it is one of the industries suffering the most as a result of the trade disputes, alongside Telecom. 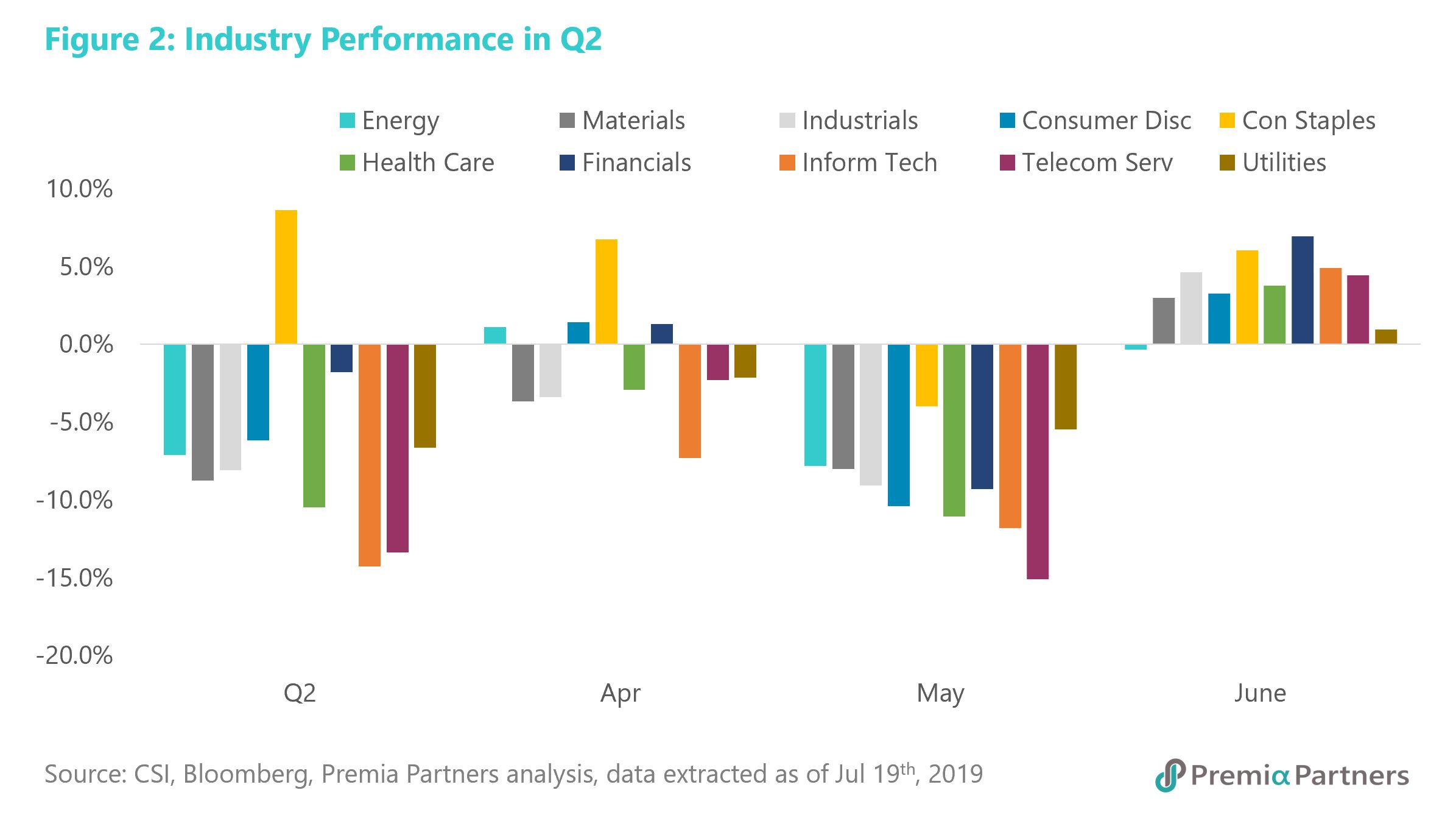 The two Premia ETFs (2803: China Bedrock and 3173: China New Economy) both underperformed the CSI 300 index in the 2nd quarter with slightly different reasons: 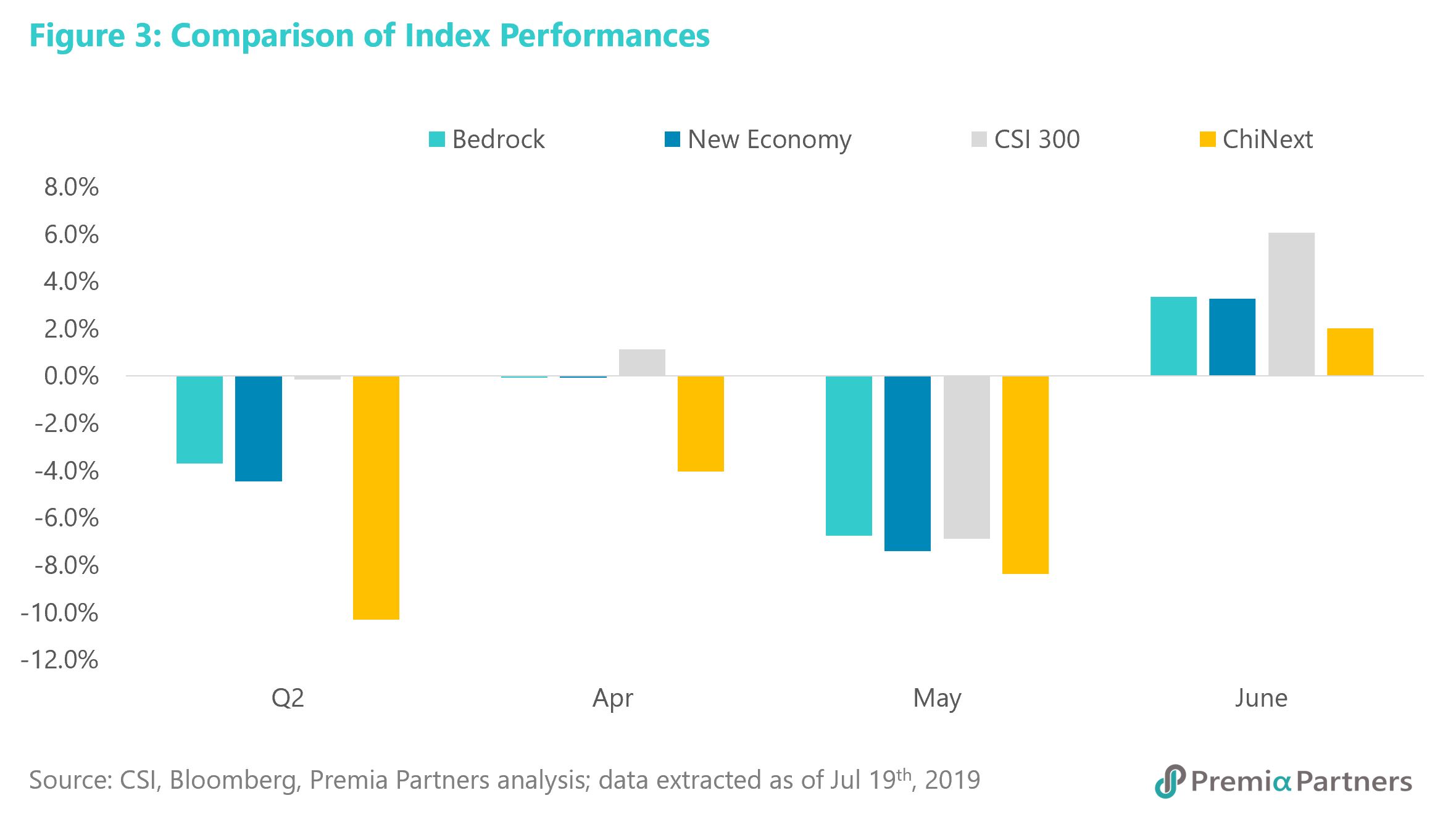 If there were big data analytics available for the most tracked stocks by onshore retail investors in China, Moutai would be the undisputed top name.  Despite being a sector we currently underweight thus missed out its earlier rally, Consumer Staples is undeniably part of China’s consumer economy and an element of consumption upgrade megatrend that our investment research teams are studying the appropriate expression in the indices.   Growth and domestic enthusiasm aside, however, the current fundamentals is telling a story of caution -  the CSI 300 Consumers Staples Index which includes close to 60% liquor and brewery companies is currently trading at an all-times-high PE multiple of 34 times, which is above its previous four-quarters-rolling-average of 28x, and the peer S&P 500 Consumer Staples Index’s PE of 21x. 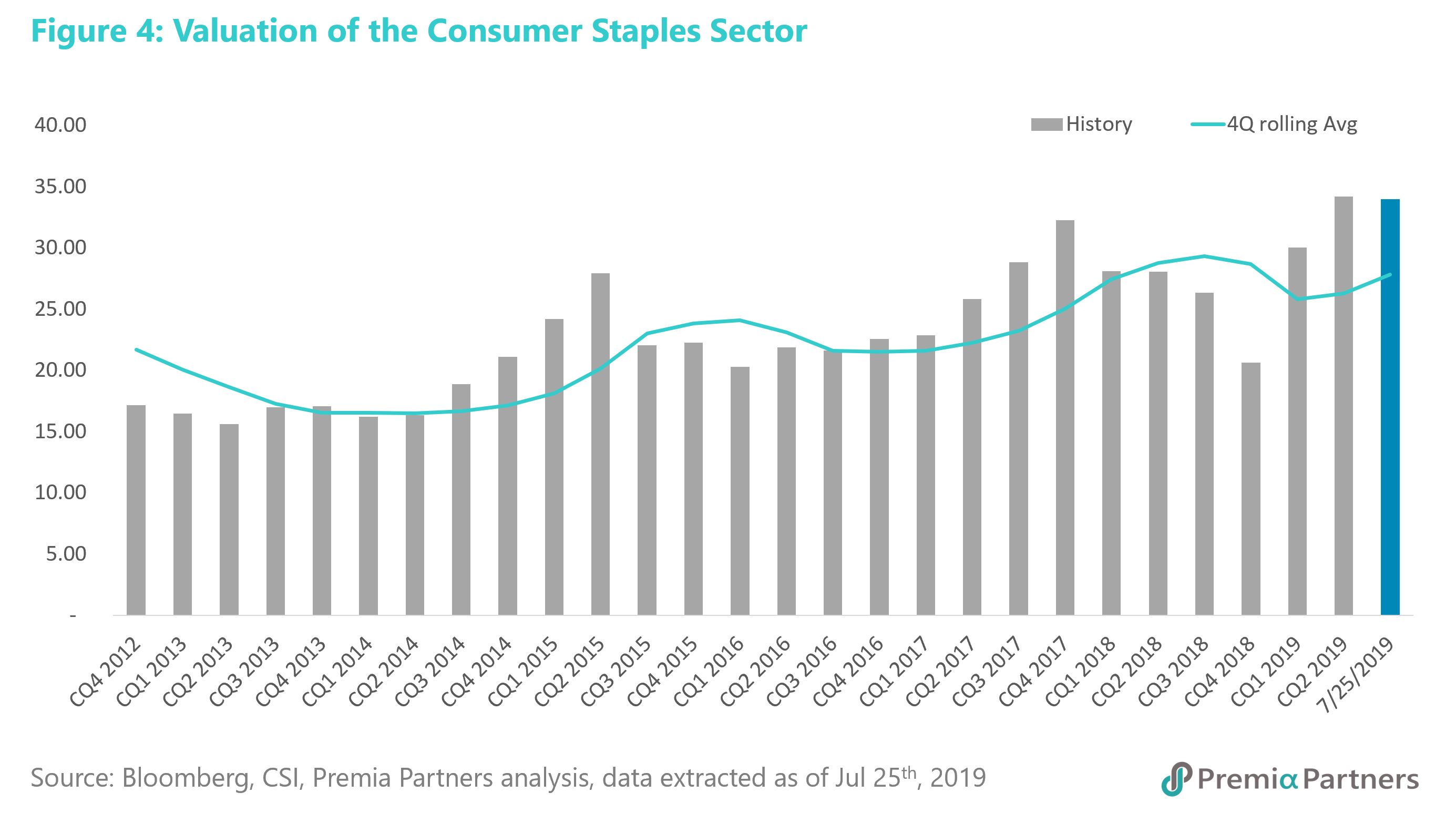 On the other hand, some of the top new economy sectors’ valuation are at or close to attractive levels.  For instance, Consumer Discretionary is currently around 15x, lower than its 5-year average; and Health Care is currently at 33x, four thirds of the sector’s PE a year ago.

Looking forward into Q3, cautious investors who are wary about the overheat in Consumer Staples may consider reducing the sector weight by tactically switching allocation to our value-oriented Bedrock strategy.  For those taking a more optimistic view on domestic policy supports and further stimulus, a quality growth play of the new economy sectors such as Consumer Discretionary, Health Care and IT is set for long term growth opportunities. As we observed over the years, reversal is often one of the best trades available in the A shares market.