A-shares in 2019: quality merchandise on sale

As we wrap up 2018, it’s hard not to reflect on a -25% year in A-shares. As investors, however, we have to look forward and ask ourselves – what’s in store for 2019? Will the trade war result in continued downward momentum? Or will policy accommodation and an improved trade environment result in a massive upside reversal? Looking back 10 years to the global financial crisis, we examine a potential path forward for A-shares in 2019.

After a fruitful 2017, 2018 turned out to be a difficult year for pretty much every equity investor.  Almost no major market was able to deliver a positive return except the US, which has been the darling of global investors in recent years.  The S&P 500 just barely managed to stay flat and performed relatively well compared to all other developed and emerging markets.  Within developed markets, European stocks lagged behind both the US and Japan due to the reemerging debt crisis and chaotic discussions on Brexit.  Within emerging markets, Brazil and ASEAN were relatively resilient with only a single-digit negative return.  China A-shares performed poorly and recorded a loss of 24.9% in 2018, more than offsetting the gain in 2017.  Other asset classes – including global bonds, oil, gold, foreign currency – all recorded negative returns as well.  Seems there was no safe area for money to hide anywhere besides cash, which toward the end of the year began to provide a decent return, at least in USD.  Outside traditional asset classes, cryptocurrencies had an historical collapse, with Bitcoin falling from USD 14,311 at the beginning of this year to USD 3,374.  That said, we should not forget that Bitcoin was trading at USD 952 only 2 years ago at the end of 2016, resulting in an amazing 2-year return. 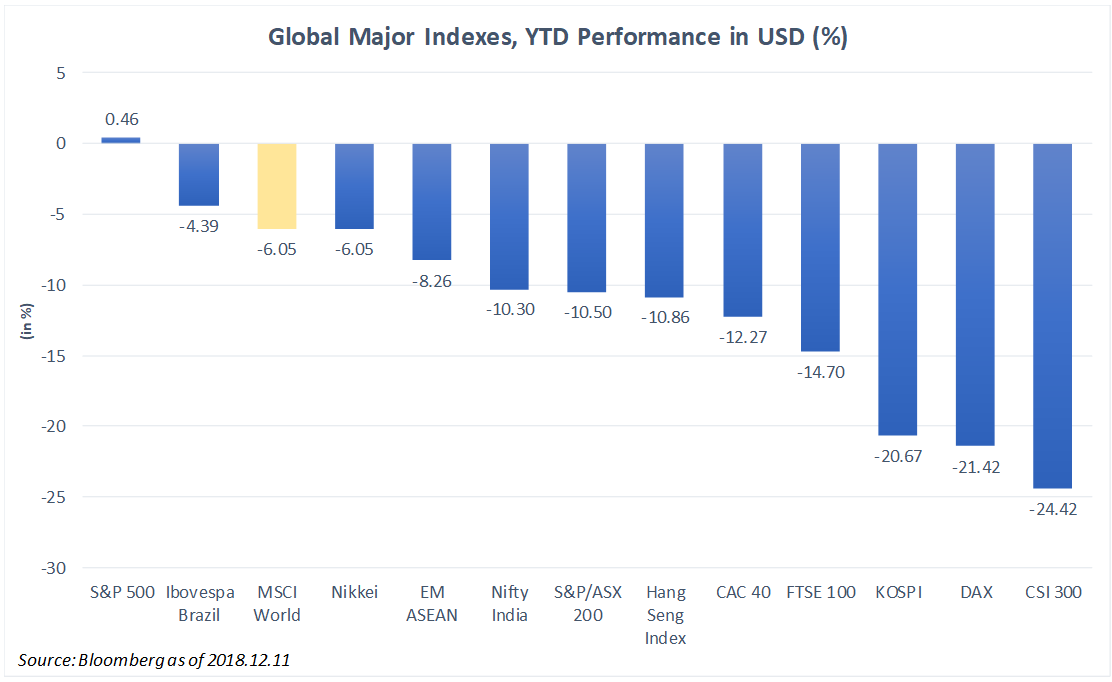 China led world equities down in 2018

During the year, the Chinese government’s emphasis on deleveraging over the last few years finally worked, perhaps too well.  Liquidity all but disappeared, reflected in a substantial slowdown in shadow banking activities, a decline in market turnover, and a reduction in margin trading balances.  PBOC governor Yi Gang even admitted publicly that “we were not very thoughtful when making some policy decisions in the past, lacking in coordination and there was a deviation in policy implementation as well”.  Interest in China A-shares from domestic investors dropped significantly, overwhelming the increasing foreign demand as global investors began to add A-shares on the back of MSCI inclusion in late May and August.  Large-caps represented by CSI 300 performed slightly better whilst small caps highlighted by CSI 1000 continued their derating since the sell-off in 2015.  Size as a factor did not work well as mid-to-small caps got punished in a down market with investors simply wanting to reduce risk exposure without focusing much on fundamentals.  On the sector front, telecom and information technology suffered the most, dropping 39% and 37% in USD respectively, as the different opinions regarding technology transfer between the US and China started to impact markets.  The US investigation into ZTE and Huawei, the leading telecom equipment companies in China, dampened sentiment further for these two sectors.  On the flip side, utilities was the best performing sector with only a 15% drop due to their pure domestic exposure and defensive nature. 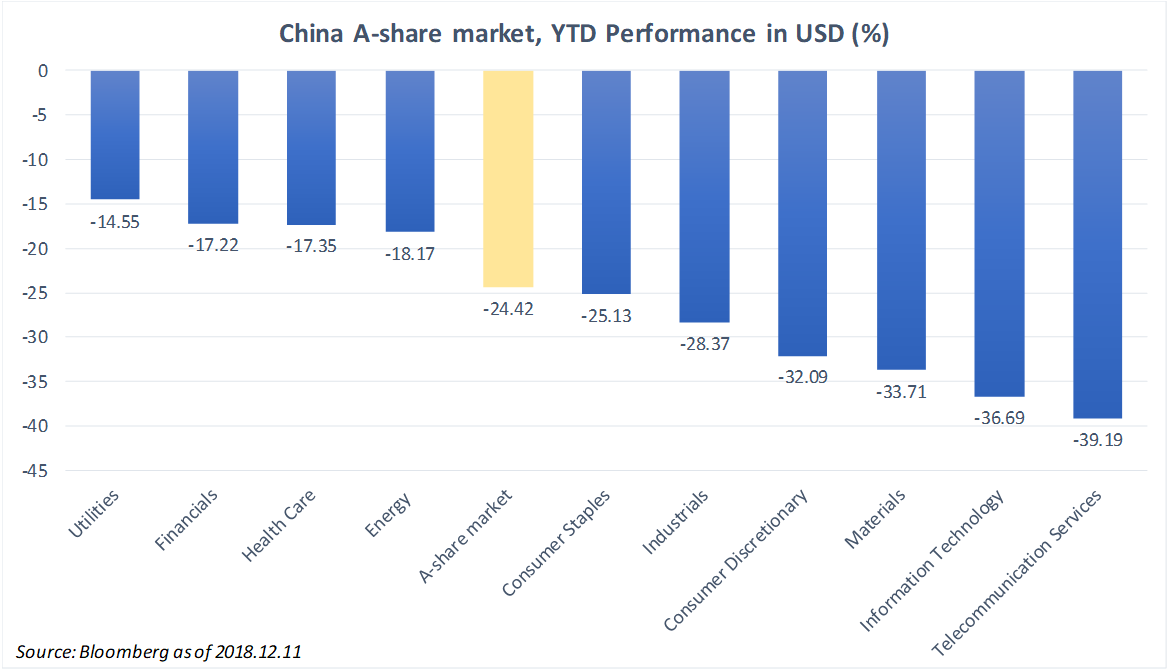 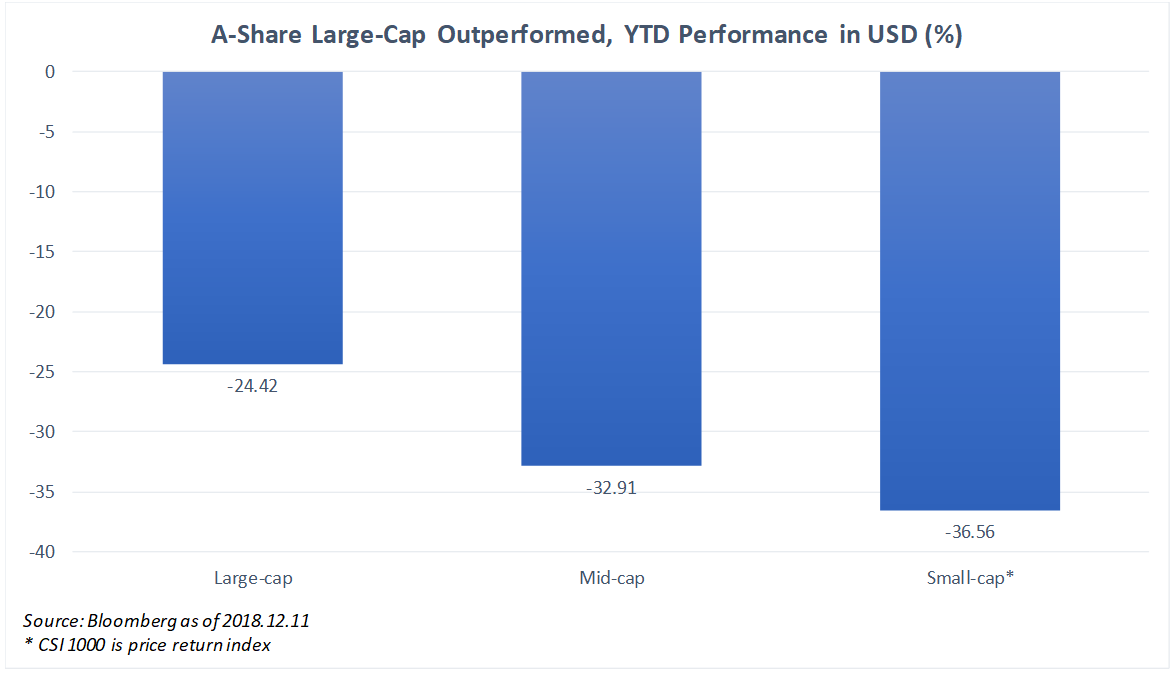 Trade war and (or vs) policy accommodation will determine 2019

In 2019, market focus is likely to continue being dominated by geopolitics and macro events, including the development of the trade war between the US and China.  Fortunately, the gap between trade war expectations and the potential outcome has narrowed significantly in recent months.  The surprise shocks felt by investors this year should no longer have the same negative impact for Chinese equities in 2019.  We believe, and many investors are starting to agree, that we have already seen the policy-bottom in China.  The overtightening/deleveraging direction has already shifted to be more accommodative in order to support economic growth.  In mid-October, President Xi, Premier Li and all major government officials in charge of finance and economic activities issued separate statements expressing their support for the stock market and the economy.  President Xi’s top economic adviser, Liu He, commented that the sell-off could be good for the stock market’s health and long-term development while the CSRC Chairman said that the commission has maintained a baseline of financial market reform, supporting innovation as it seeks to stabilize and boost market confidence.  With clear government support, the important question for us as investors is whether we should wait for the bottoming out of the macro economy before putting money back into A-shares.

Unlike the US, we do not have a century of market data to study for past patterns in China.  However, the global financial crisis in 2008/2009 provides a useful reference to think about 2019.  10 years ago, China PMI fell below 50 in July 2008 and continued falling until early 2009.  To cope with the external negative impact of the Lehman Brothers collapse and the resulting liquidity crunch, China began adopting loosening monetary policies via four consecutive reductions in the benchmark interest rate in the last 4 months of 2008.  The regulator also reduced the required reserve ratio at major banks in October, followed by two more cuts in November and December.  In order to make sure that no credit crunch occurred, the government directly requested banks to facilitate access to loans for companies and private households.  The China Banking Regulatory Commission issued new regulations easing the establishment of companies that offer consumer loans to private households for the purchase of consumer durables while the four major state-owned banks were asked to increase their lending to small and medium-sized enterprises. On the fiscal side, China announced a fiscal stimulus program of RMB 4 trillion in November 2008 with ambitious goals for infrastructure expansion, domestic consumption support and job creation.  Policies to tackle the slowdown in Chinese export demand included rebates on value-added export taxes targeting low-cost goods, such as textiles and furniture, for cost-conscious emerging markets.  Lastly, the government formalized preferential treatment of Chinese firms in government procurement.  With all this effort, China’s economic growth eventually found the bottom in the first quarter of 2009 and started growing again in the second quarter of the same year.  A-shares, however, moved ahead of fundamentals, bottoming in early November 2008, as stimulus policies were introduced, and rallying since then.  To apply this experience to today’s markets, our view is that the Chinese government already showed its policy changes and the market has already started responding, without waiting for macro data confirmation.  In fact, similar to 10 years ago, most economists now expect China’s economy to bottom out in mid-2019. 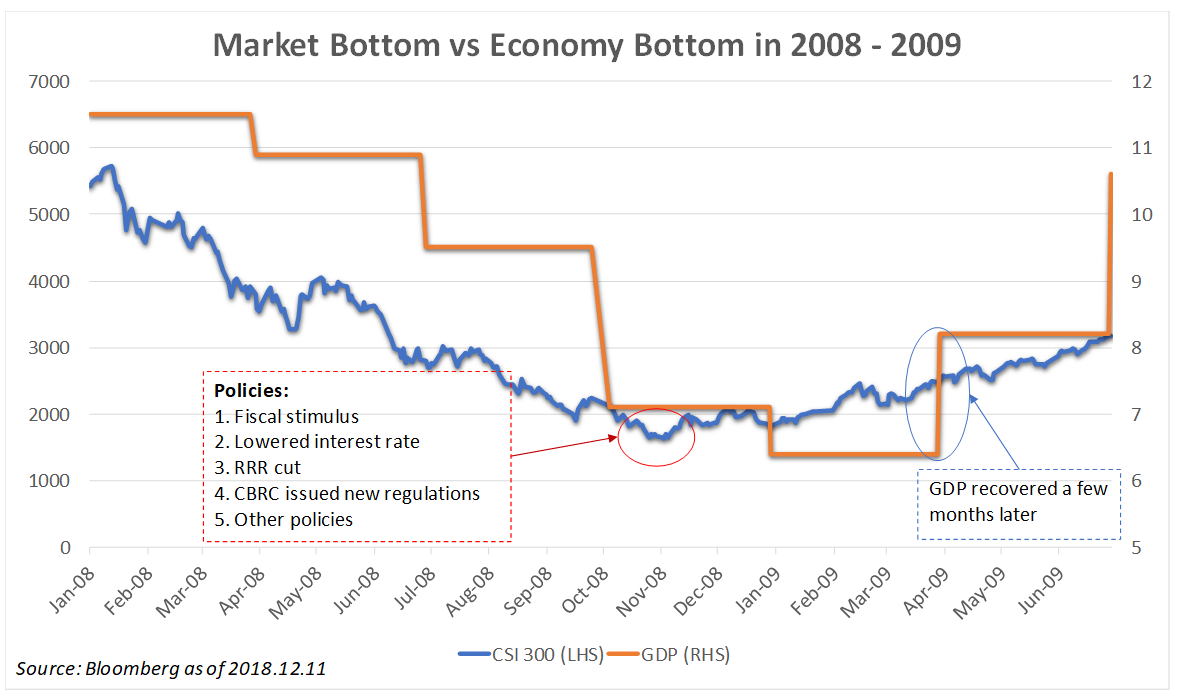 Of course, the recovery in A-shares is unlikely to follow a smooth path and there will be continued noise around trade disputes, on-going arguments around technology transfer/intellectual property protection, accusations of currency manipulation, concerns regarding structural change/economic reform and escalating debts, etc.  Most of these issues will not be resolved within the next 12 months for sure.  Despite these challenges, China’s macro data does not paint a bad picture overall.  The world’s second largest economy is still expected to grow at 6.2% year-on-year in 2019, a mild slowdown from 6.6% year-on-year in 2018.  Trade activities will be reduced but other economic activities, including fixed asset investment, industrial production and retail sales will remain quite solid.  Unemployment is low and inflation numbers are decent.  On a relative basis, other markets are not much better, especially the US, which is showing early signs of economic weakness in the past few months, such as an inverted yield curve, lower than expected non-farm payrolls, and increasing volatility in the stock market, etc.  It’s probably still too early to discuss the possibility and timing of a recession in the US.  However, markets trade on marginal changes in expectations and investor confidence in US market robustness is definitely being tested.  If expectations of fewer rate hikes in 2019 and the end of dollar strength become stronger, emerging markets are sure to rally.  China will likely be the biggest beneficiary of such a move given valuations and relative macro numbers.

On the trade front, China is slowly becoming an even more important importer globally.  Instead of buying raw material, energy, parts and components, China’s imports are gradually shifting to more finished products as the economy transitions away from being the world’s factory going forward.  Consequently, China is likely to run a larger trade deficit going forward.  One positive side effect is greater payments in RMB by Chinese importers, reinforcing the Chinese currency as an international settlement currency, similar to the US petrodollar ecosystem.  On the monetary policy front, over the next few months we expect to see a reduction in the required reserve ratio, increased re-lending and re-discounting quotas and more credit support for corporate bond issues.  On the fiscal side, there will be cuts in imports tariffs, increases in exports tax refunds, higher personal tax thresholds and allowances and of course higher infrastructure spending.  The development and ongoing opening of capital markets will be on track, with relaxed rules in QFII/RQFII, expanding Connect and cross-list program and loosening rules for share buybacks.  A-shares buybacks surged this year to RMB 35 billion year-to-date, up from RMB 8 billion in all of 2017, as companies tried to shore up share prices and inspire investor confidence.  Again, the government stepped in by introducing more favorable policies.  The China Securities Regulatory Commission, Ministry of Finance and the State-Owned Assets Supervision and Administration Commission jointly revealed that companies can buy back shares if the stock price has fallen below book value per share or has dropped a total of 30% within 20 consecutive trading days.  Fundamentally, earnings growth still looks quite decent for A-shares companies with consensus growth of 12.3% in 2019.  Information technology, real estate and healthcare sectors are leading the estimates while energy and financials are lagging behind.  There is of course risk of downward revisions, particularly as the economy slows further early next year, but we expect high single-digit earnings growth next year, which is comparable with the US. 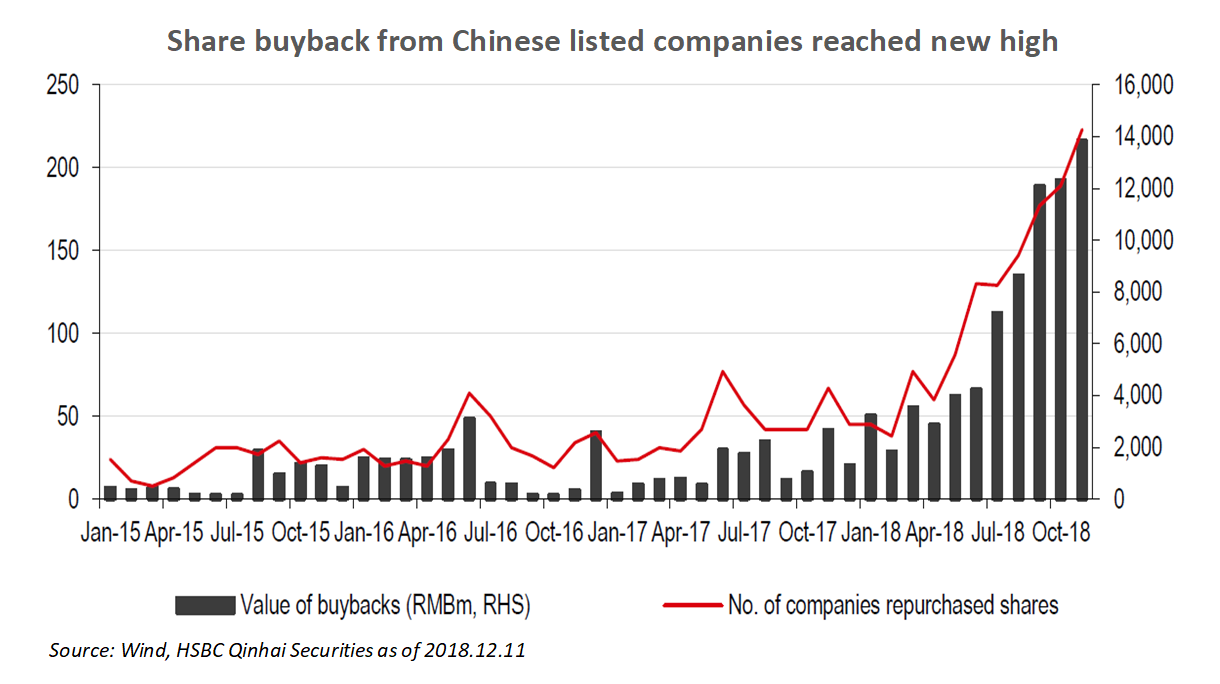 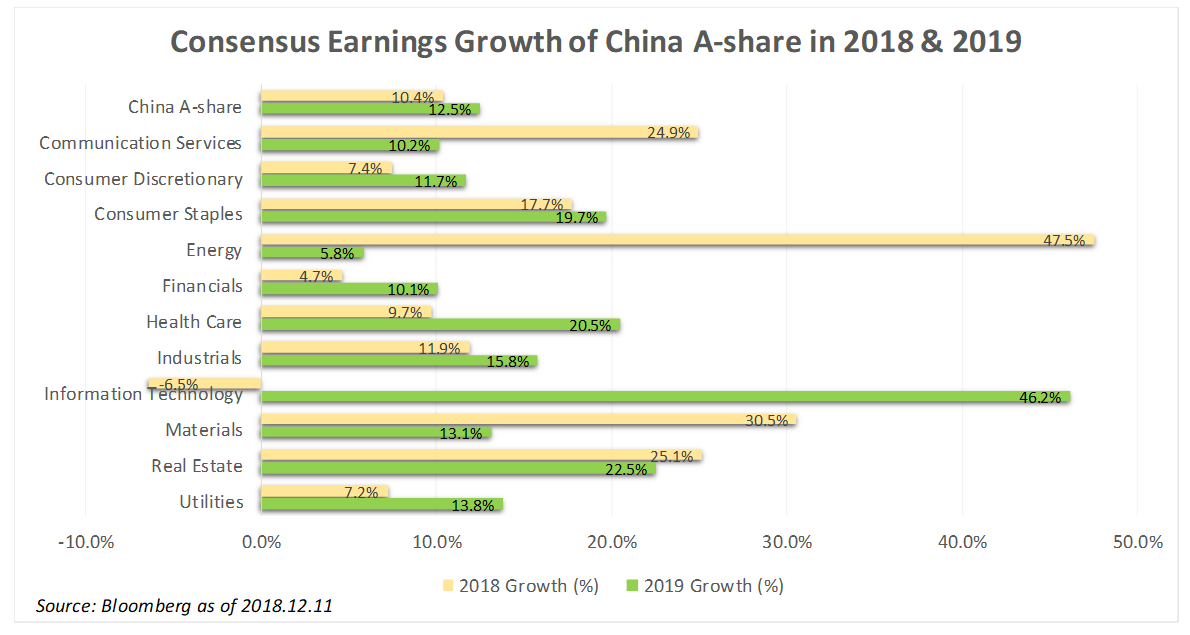 On the technical side, foreign inflows to China A-share have increased on valuations in recent months and should grow considerably in 2019.  Index providers are the main driving force, with FTSE and S&P Dow Jones announced their inclusion plans while MSCI is targeting an increase in the inclusion factor from 5% to 20% next year.  MSCI is also expanding the universe by adding ChiNext stocks to the universe.

In short, we believe that short-term uncertainty does not erase the attractiveness of China A-shares in terms of valuation and growth prospects.  Any investor focusing on medium-to-long-term investment objectives should take advantage of this opportunity to invest in quality assets at a discounted price.  Though many are waiting for “proof” of recovery in economic data, A-shares have moved up substantially in recent weeks (in contrast to global markets) and are likely to continue moving ahead of fundamentals.  To quote Warren Buffett: “Long ago, Ben Graham taught me that ‘Price is what you pay; value is what you get.’ Whether we’re talking about socks or stocks, I like buying quality merchandise when it is marked down.”  Wishing you peace, love, joy and prosperous this Holiday Season and throughout 2019. 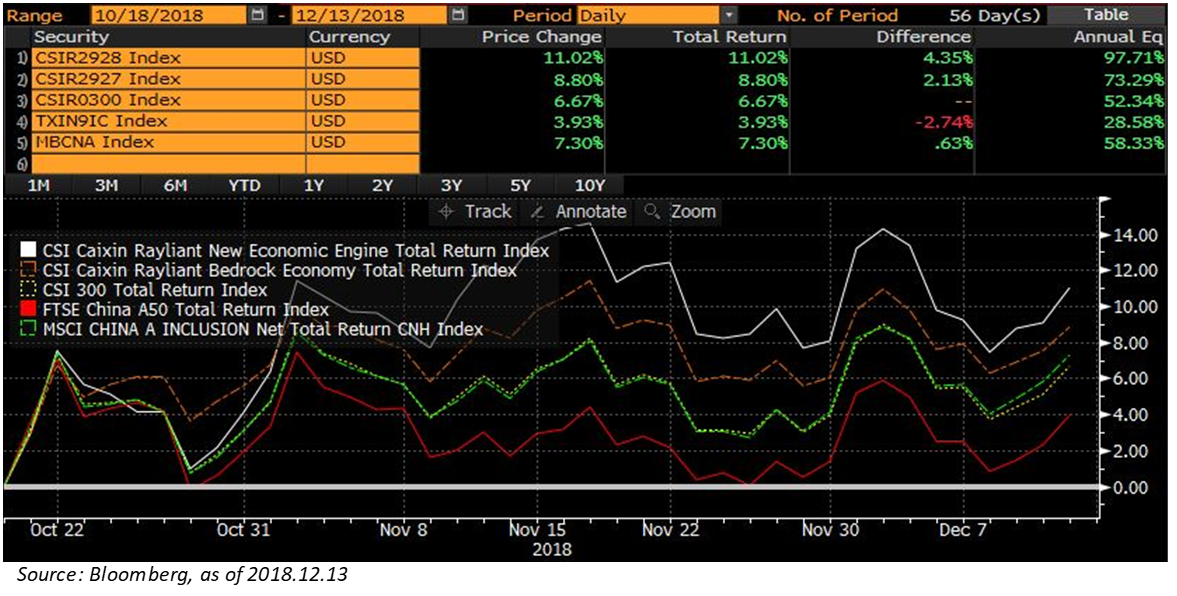