How factors have performed in China A shares - roller coaster or Ferris wheel?

As the issuer of world’s first two fundamental multifactor China A-shares ETFs, we look closely into the factors. The China A shares market went on a roller coaster ride since late 2018, and how about the factors – are they on the same ride or rotating around a Ferris wheel? In this piece, we re-cap the research on China A fundamental factors and share the recent observations on factor performances.

With growing interest of viewing China equities as a standalone building block and gradual inclusion of China-A shares into global equity benchmarks, investors increasingly seek for efficient approaches to generate excess equity returns in China A shares.  Smart beta multifactor investing into China A shares is still young, and our very own Premia ETFs launched in 2017 were the world’s first two fundamental multifactor China A-shares ETFs.

How did factors perform, especially throughout the recent market roller coasting amid the US-China trade dispute?  In this piece, we re-cap the research on China A fundamental factors and share the recent observations on factor performances.

Modern investing world has identified numerous factors beyond the traditional Fama-French 3-factor model.  While some may argue that many so-called factors are based on datamining, we are not getting into a debate here but rather presenting the ones focused in Dr Hsu’s study (Hsu, Viswanathan, Wang and Wool, 2017).  The factor coverage in the research as shown in Exhibit 1 is threefold:  those from the extended Fama-French 5-factor model (Value, Size, Investments, Profitability), the popular and widely discussed factors of Low Volatility and Momentum, and a China-specific consideration of earnings quality (Accruals and Net Operating Assets) based on findings from China’s unique accounting conservatism. 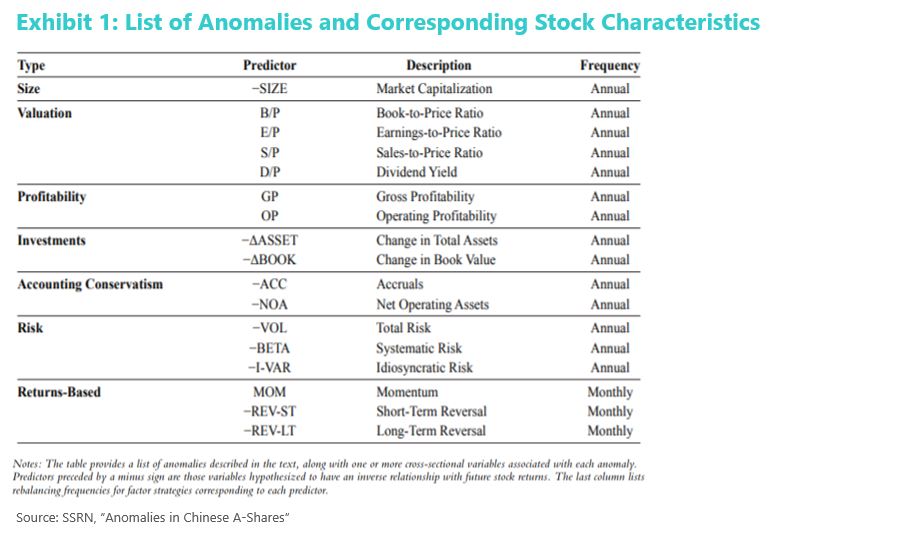 It’s been over a year since the inception of our fundamental multi-factor China A-shares strategies.  Shortly after we getting out of the gate, the market experienced a steep dive down, followed by an upward rally in Q1 2019 recovering almost all the loss happened in 2018.  Throughout this exciting if not nerve-racking ride, we saw our multifactor approaches demonstrated stronger resilience compared to peer indexes.

From the last trading day of 2017 to end of Q1 2019, Bedrock and NEE have outperformed CSI 300 and ChiNext, respectively.  With LowRisk characteristics in methodology design, both the Bedrock and NEE strategies have shown lower magnitude of maximum drawdown than their respective peers over this period. 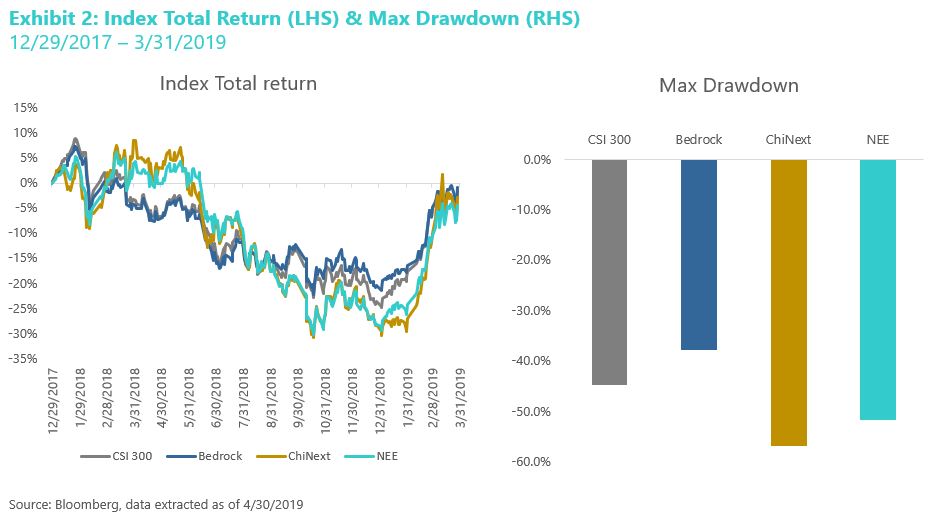 With help from Rayliant, we examined in detail the five factors that are either explicitly defined in the fundamental screening or implicitly given exposure per index methodology design. 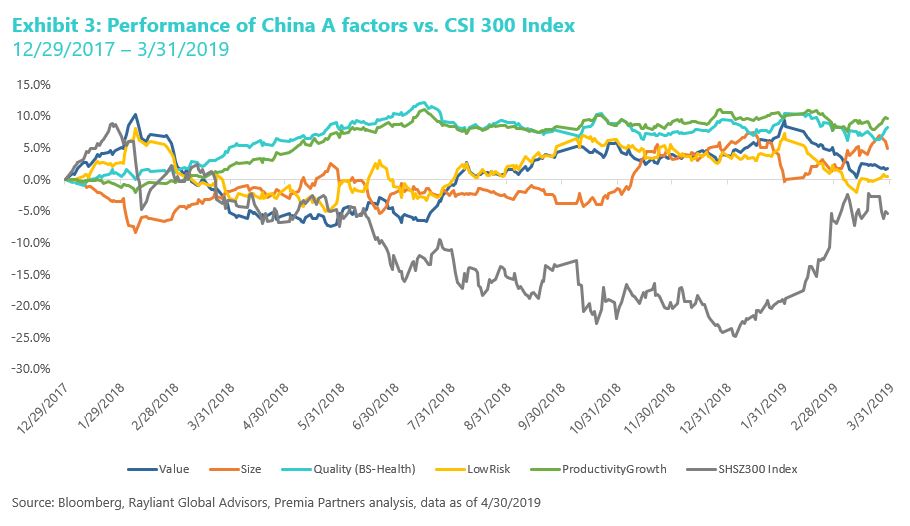 Contrary to the overall market performance, all 5 China A factors returned positive figures had one invested in any or a combination of them.  However, investors should be aware that the restrictions on shorting of China A stocks make these single factor indexes not directly investable.   While not able to eliminate beta and capturing all possible factor premia with long/short approaches, the multi-factor smart beta approach we employed aims to ease through downtimes with lower drawdown and capture a combined factor alpha over the market beta over the long term.

Factors are not magic wands and no single factor can always outperform.  A closer look at the factor performances help to illustrate the rotation of factor performances at times of different market conditions.  The past year’s ups & downs along with changes in fundamentals plus external shocks was particularly interesting – as factors turned out to be more likely on a ferris wheel than a roller coaster. 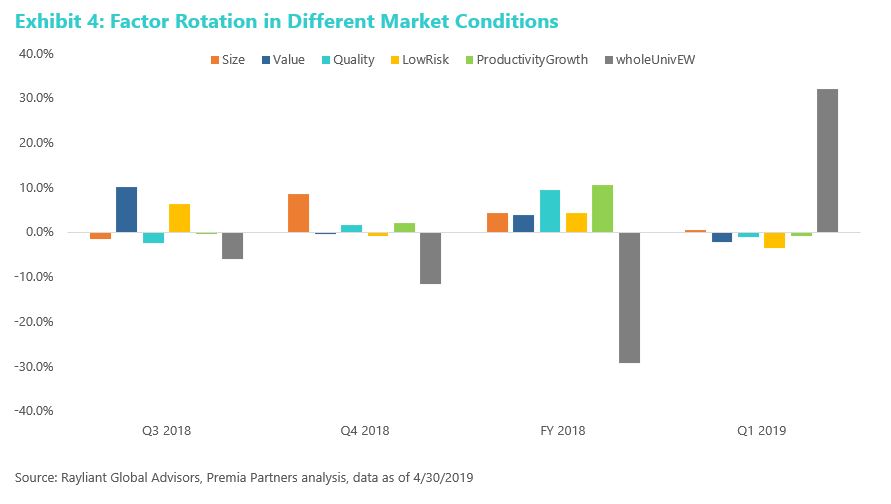 As seen in Exhibit 4:

While a sophisticated investors may be capable of perfect rotation timing using a combination of single factor strategies, we believe our fundamental multifactor approach is more resilient for risk-minded asset allocators especially with the level of government-led market intervention and external shocks from the US-China negotiations that this market is exposed to.

Our Premia CSI Caixin China New Economy ETF (3173 HK) is a multifactor strategy designed to capture the rising trends in technology advancement, urbanization, rising middle class, and aging population. The strategy starts with all A-shares stocks in the “new economy” sectors – a concept first raised by Premier Li Keqiang in 2013 – followed by fundamental screening of asset-light and financially healthy companies.  For detailed methodology, please refer to Introduction to New Economy