China A-shares Rally and the Role of New Economy Stocks

What’s behind China A-shares recent rally? Why are new economy stocks seemingly in the lead after more than 3 years of underperformance?

Global investors not focused on China may be surprised by the recent resilient performance of the China A-shares market.  Given a mixture of an economic slowdown, an intensified trade war and external uncertainties like Brexit, the move doesn’t seem to make much sense.  China’s GDP recorded a record low of 6.2% in 2Q19 and economists are now expecting the figure may drop below 6% in 4Q19.  The official PMI data has been below 50 four months in a row, signaling that the macro environment remains challenging.  China’s Li Keqiang Index - a weighted average of annual growth rates in bank loans, power generation and rail freight - also shows a gradual slowdown from the peak of 12.9% in early 2017 to 6.1% this August.  Intuitively, Chinese equities overall should be doing poorly and even getting de-rated, but A-shares are bucking the trend and recently reached a new high since April this year.  One driver of this is quite simple – all these levels are still materially better than the last cycle’s bottom in mid-2015.  With more easing policies expected on both fiscal and monetary fronts, the market has increased the likelihood of China achieving a soft landing despite the above-mentioned headwinds.  In addition, the removal of quota limits in both QFII and RQFII sends a strong message about the government’s determination and desire for market openness (and related foreign inflows), which is likely to support ongoing MSCI inclusion in the next few years. 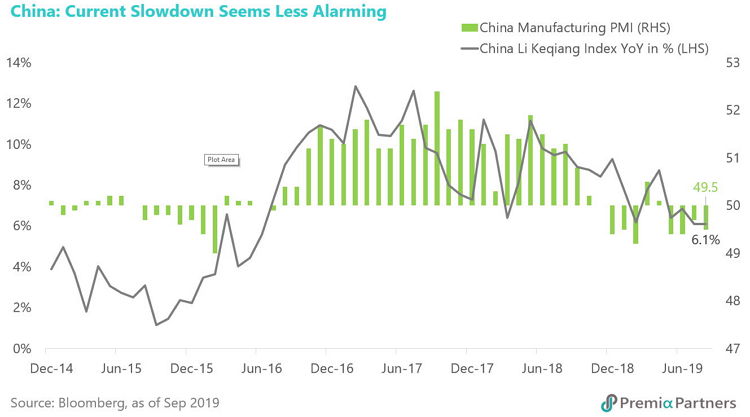 On the monetary front, the latest cut in the Required Reserve Ratio (RRR) will help release RMB 900 billion to offset the tightening impact of tax payments.  The RRR will be lowered by 0.5% points for all banks immediately, while the ratio will be reduced further by 1% point for city commercial banks in two steps in mid-October and mid-November.  In addition, in August the PBOC introduced the Loan Prime Rate (LPR), a new reference rate for bank loans, to make the interest rate mechanism more market driven.  It is priced at a spread over the medium-term lending facility rate, which is substantially lower than the benchmark rate, with the goal of reducing interest rates and therefore the financial for both corporate and individual borrowers.

On the fiscal side, the National Development and Reform Commission have approved numerous projects with a total value of RMB 830 billion in the first 7 months, recording year-on-year growth of 250%.  Local governments are also allowed to use the proceeds of special bond sales as equity capital for some infrastructure projects.  Infrastructure investment growth, standing at 4.1% year-on-year now, may increase in coming months as approved projects are put into action and as accelerated special government bond issuance provides more funding.  In addition, the government is cutting personal taxes to stimulate consumption and corporate taxes to help reduce liabilities.  Value-added Tax (VAT) will be decreased, which is welcome news for the manufacturing sector, which will be subject to a rate of 13% going forward, a material 3% deduction.  China A-shares benefit more than their offshore peers such as HK H-shares and US ADRs given its mix of corporates has the highest exposure in this VAT category at the moment. 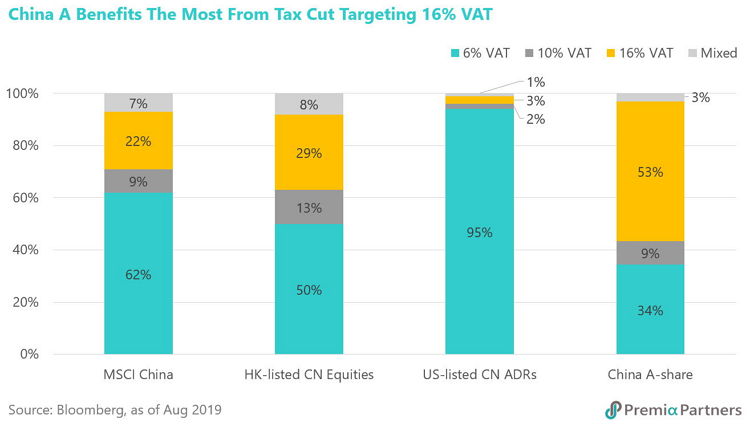 Beyond traditional policy tools, Premier Li laid out a few new initiatives on domestic consumption stimulus, covering areas such as transforming traditional shopping malls, expanding e-commerce coverage in rural China, improving after-sales services, developing a holiday spending model and facilitating consumption of durable items like green/smart household appliances and automobiles.  China automobiles sales faced a cyclical slowdown over the last few years, dropping from a high of 2.8 million monthly sales in late 2017 to the latest reading of 1.7 million.  The growth rate trended down from nearly 30% in late 2016 to a low of -18% earlier this year.  Unsurprisingly, passenger cars and SUVs both suffered from weaker consumption sentiment while commercial cars held up quite well.  In response, the State Council released "Opinions on accelerating the development of circulation and promoting commercial consumption", which encourages financial institutions to aid new energy vehicle consumption.  Industry sales growth may resume once these stimulus policies become effective in the next few months.

Back to the A-shares performance, the story is quite simply new economy vs old.  Information technology, telecom services, healthcare and consumer discretionary stocks are leading the current rally, while financials and utilities are lagging.  Investors are preferring sectors that benefit from economic reform and offer secular growth in key themes, such as domestic consumption, aging population, technological upgrade and 5G deployment.  There is a realization that China’s focus in the trade war is not to defend the existing export sectors, but to grow the domestic sectors to ensure that trade wars have less of an impact going forward.  Quality stocks exposed to these trends are likely to remain core holdings in investor portfolios for some time.  Their volatility will be higher of course, given their growth nature, but the market is also likely to continue rewarding them with higher valuation multiples.  More importantly, we believe there is reason to worry about the profitability of Chinese banks as the new LPR mechanism will gradually push down their net interest margins.  In addition to slow industry growth, Chinese banks may also suffer from deteriorating asset quality amid the trade war (given that’s there the legacy loans are) and a potential downturn in the property cycle.  In our opinion, a re-rating upward of China’s financial services sector is unlikely – it is cheap for a reason. 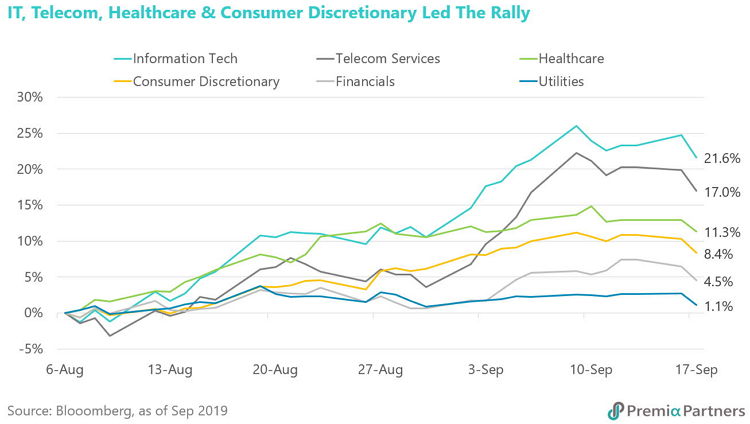 Our New Economy strategy has done very well year-to-date, with a return of 37.2% in CNY, outperforming all major indexes including mega-cap FTSE A50, large-cap CSI300 and MSCI China A Inclusion and Shenzhen based ChiNext.  However, New Economy stocks still lag mega-caps by over 60% points when extending the observation period to the A-shares bottom in February 2016.  We believe New Economy stocks have plenty of room to continue their bold move versus Old Economy and mega/large-cap stocks.  Indeed, the fundamentals support this stronger performance from New Economy stocks.  Let's compare FTSE China A50 as the representative for Old China, focusing on mega-caps, SOEs and financials, and the CSI Caixin Rayliant New Economic Engine Index as New China, consisting of small-to-large caps, private enterprises and new economy sectors like consumer discretionary, healthcare and information technology.  Looking at the revenues of the latest constituents from 2015 to estimates for 2019, we see a clear trend.  New China has been growing at a CAGR of 16% compared to Old China's 2%.  Moreover, estimated revenue growth in 2019 is 26% for New China and -6% for Old China.  The economy is clearly transitioning and there is plenty of growth for those who know where to look.  For investors seeking growth opportunities in China, it’s worth taking a look at our Premia CSI Caixin China New Economy ETF, which uses this same New China index. 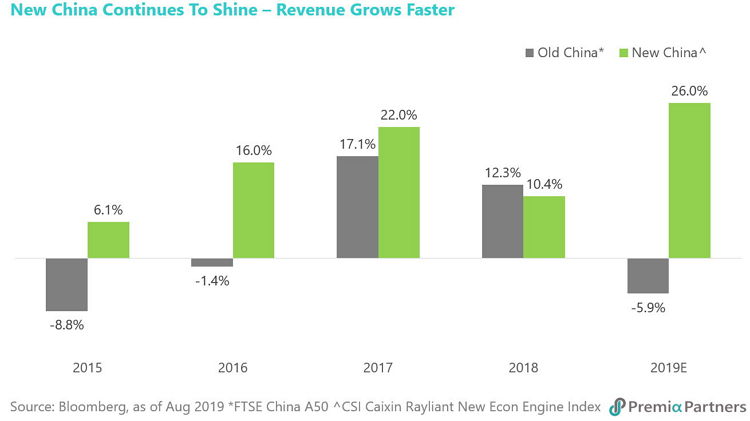