Brace: The peaking and rolling over of economic growth and stock prices from late last year/early this year is now snowballing into likely recessions, with bear markets already reality around the world. The S&P 500 and the Nikkei 225 have fallen almost 20% on intra-day peaks and lows, at the time of writing. Meanwhile, the DAX, the CAC40, the UK100, the all ordinaries are already in bear market.

As written here recently, the rebound on policy stimulus hopes had indeed played out as we expected – it was only a brief, relief rally. Markets are falling again, savagely, with a series of lower highs and lower lows now a real prospect.

Indeed, markets are signalling that the recessions we had warned about here are looking increasingly likely as the spread of COVID-19 to developed markets eats into discretionary consumer spending.

Economies were already either peaking-out or weakening prior to the outbreak of COVID-19.

Recession in Japan. The Japanese economy shrank by a preliminary estimate of 1.6% q/q in 4Q19. The outlook for the current quarter is grim: The au Jibun Bank Services PMI slumped into contraction at 46.8 in February from 51.0 the previous month. This is the worst reading since 2014. Japanese manufacturing was already contracting in January, with the au Jibun Bank Manufacturing PMI at 48.8. It fell even further in February to 47.6. Bottom line: It is likely Japan is already in a recession-in-progress, and that recession will worsen if the Olympics is postponed, as seems increasingly likely.

Zero growth in the Euro Area. The German economy flatlined at 0.1% growth in 4Q20. That was of course pre-COVID-19. Conditions are likely to have worsened to negative growth in 1Q20. Germany’s Manufacturing PMI remains in contraction mode at 47.8. Although there was a lift in that figure from the deeper contraction of 45.3 in January, that “improvement” was in part due to a sharp deterioration in supplier delivery times caused by supply disruption from China. This ironically boosted the headline PMI figure.

While the Euro Area economy is not as badly off as Japan, we are likely to see a further deterioration on the 0.9% growth figure for 4Q19. A recession, while not a done deal, is a real threat as COVID-19 lockdowns – as has already happened in Italy – widen.

Discretionary spending threat in the world’s largest economy. There is underestimated economic risk in the US, which is starting to see a sharp rise in COVID-19 numbers, to over 550 at the time of writing. There is community spread there now and officials appear to have given up on containment, to focus on mitigation. Fear will likely follow, hurting consumption, which accounts for 70% of the US GDP.

Consider this: Discretionary spending that could be sensitive to sentiment/fear – durable goods, clothing, recreational services and spending at hotels/restaurants – account for around 17% of the US GDP. If we get only a 10% decline in the above categories of spending, that’s a loss of about 1.7% of the US GDP.

COVID-19 now a DM economic risk. The US could be behind the COVID-19 “curve”. While new infections in China are showing early signs of possible easing, they are rising rapidly in the US. Indeed, the risk of spread could be switching over from China to the developed market countries of US and Europe.

Limiting the spread of COVID-19 will likely work best in countries which have “command and control” systems and populations that follow orders. China has proven itself capable in that regard. Liberal democracies will find it more difficult to enforce strict isolation and social distancing; their populations less obedient.

Danger and opportunity. The Chinese word for “crisis” -  危机 “weiji” – says this eloquently through the two characters which symbolise “danger” and “opportunity”.

Even some mean reversion of valuations – particularly in the US – will hurt a lot of investors who are leveraged long. 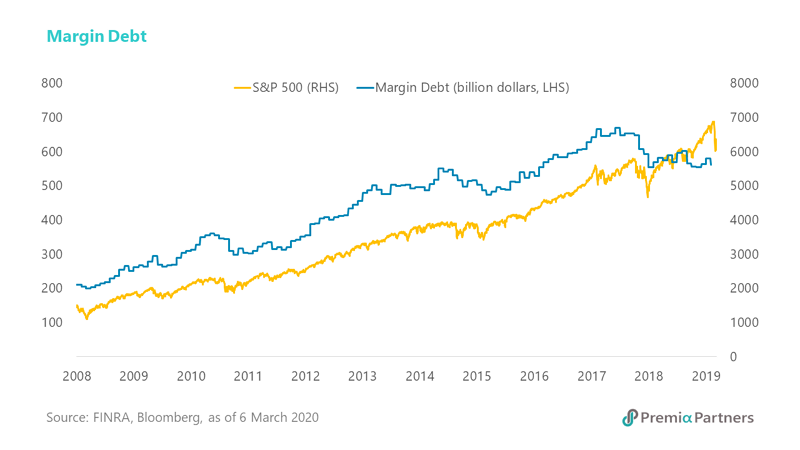 This will be painful for those who have sold volatility and puts for premiums. It will be damaging for unhedged long investors who don’t have the ability to hold through the turbulence.

Seek safety urgently. Corporate credits will be next on the bear’s attack list. A simple strategy would be to hold cash or US Treasury-based instruments to await better buying opportunities. There will be opportunities later in the year.

Corporate credit investors should urgently switch to US Treasury instruments. The rout in equities has also pushed up sharply the cost of credit default protection in recent days.

COVID-19 could morph from a health to market to credit crisis. Markets are becoming increasingly fearful of the tail risk we had written here. To repeat from the earlier Insight: “There is the tail risk that highly leveraged companies could suffer financial stress as a result of a cashflow squeeze caused by a COVID-19 driven demand shutdown. That could in turn cause credit spreads to widen, with higher corporate borrowing costs, possibly triggering credit events.”

Indeed, part of the reason for the equity market’s latest vicious sell-off was fear of what the collapse in the price of crude oil would do to energy sector credits. Energy companies are the biggest issuers in the US junk bond market. It has been reported that US$18 billion in bonds issued by oil and gas companies will mature in the coming three months. According to the Wall Street Journal and Moody’s Investors Service, North American oil-and-gas companies have more than US$40 billion of debt maturing in 2020 and more than $200 billion over the next four years.

Complacency has severely mispriced debt. The tightening of corporate credit spreads – both investment grade and high yield – through 2019 has mispriced severely the risk of corporate credits at a time of a sudden reversal of economic fortunes, corporate cashflows and market tolerance for risk. Indeed, the yield on the Bloomberg Barclays US Aggregate Bond index has now converged on the yield for the Bloomberg Barclays US Treasury Floating Rate index. There is now almost zero spread between the two. 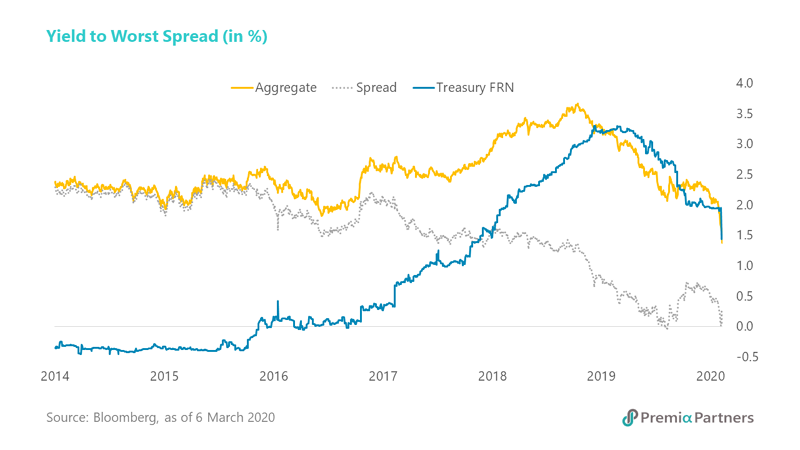 The reversal in corporate credit markets could be the bursting of a bubble. The sudden spike in those spreads in recent days is only the beginning. According to the IMF, low-rating BBB credits accounted for around 20% of the global stock of investment grade bonds in year 2000. Today, it’s closing in on 50%. And among those in that bottom rung, one-third are rated BBB minus and hence at greater risk of falling to junk bond status, according to Mohamed El-Erian, chief economic advisor to Allianz.

“The likelihood of a growing number of “fallen angels” comes at a time when the longstanding structural deficiency of the $1.2tn high-yield market — that is, a small base of dedicated investors, relative to the amount of outstanding bonds — is more apparent,” he wrote recently.