China rally - Does your exposure align with the outcome you desire?

Global equities have been doing well in the past few months right after the sharp sell-off in the first quarter of this year. Intuitively, the rally looks like classic irrational exuberance given all major economies are heading into recession whilst the coronavirus infection has no sign to slow down globally. On the other hand, the forward-looking market movement may suggest that investors have looked beyond the pandemic and already positioning themselves to capture the V-shaped rebound. Combined the solid fundamentals with an appealing valuation, China A-share looks like an exposure that investors should accumulate whenever there is a market dip. If so, the more imminent and value-added question for the investors will be what to own in the onshore market.

Global equities have been doing well in the past few months right after the sharp sell-off in the first quarter of this year.  Intuitively, the rally looks like classic irrational exuberance given all major economies are heading into recession whilst the coronavirus infection has no sign to slow down globally.

On the other hand, the forward-looking market movement may suggest that investors have looked beyond the pandemic and already positioned themselves to capture the V-shaped rebound.  As the researchers and capital around the world converge towards the development of a vaccine, and given the latest encouraging findings, a successful commercial launch is probable within the next 12 to 18 months.  In fact, there have already been more than 155 vaccines against the coronavirus being developed, and 23 vaccines are in human trial stage.

Beyond the resolution from the vaccine, on a more fundamental basis, the rapid money printing among the central banks does contribute significantly to the strong market movement and as we have seen in the past two decades of QEs inevitably a financial asset inflation that is still in the making. This time perhaps beyond our imagination with all the global powers in concerted actions. The balance sheets of US Federal Reserve, European Central Bank and Bank of Japan have increased 36.5% in the first half of this year, adding USD 5.4 trillion altogether.  Besides, the aggressive rate cuts adopted by various governments lead to an ultra-low interest rate environment not only rejuvenises the corporate credit and high yield markets, but also triggers revaluation of the equity markets now with the artificially low discount rate.

With the 10-year government bonds trading at yields between -0.4% to 1.2% among G7 countries, the reinvestment risk for investing in fixed income has just gone considerably higher in the span of a few months, for long term investors especially insurance companies and pension funds that have relied on keeping significant portion of the portfolios in bonds.  For investors reliant on interest income only, the current yield offered from the sovereign bonds or investment graded instruments is no longer generating sufficient income, and straying further into the credit spectrum for higher yield might not be feasible given one’s risk appetite and might not seem so palatable with the looming risks of increase in unemployment rates and corporate defaults.

Even the traditional 60/40 asset allocation in equity and bond may not be able to produce a satisfactory return that can match the long-term target with or without considering the inflation impact.

The important measures that both institutional and individual investors have to do in this new normal situation are (i) staying invested by not being too smart to time the market; and (ii) shifting the strategic asset allocation for return enhancement by assigning more weights in the equity side - but where to find growth? 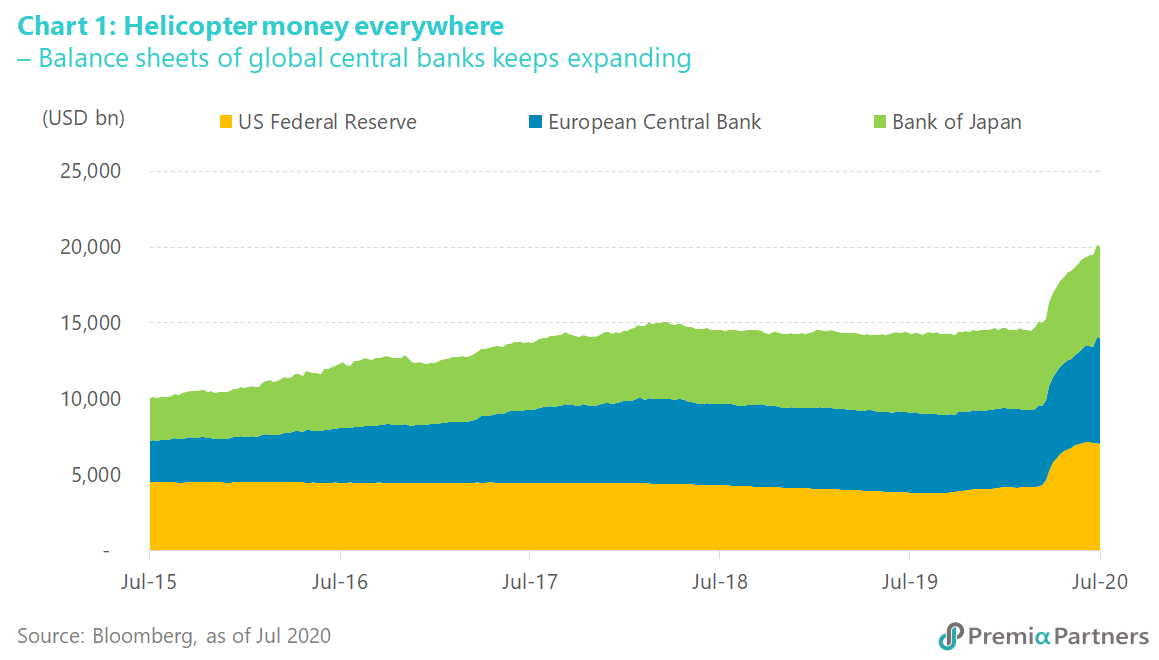 China A-share market may seem like a wildcard for some foreign investors.  It has been showing exceptional resilience during the virus hit and continuing its strong move lately, outperforming all major developed and emerging markets.  With the bullish momentum and high investor confidence onshore, some may wonder if it will repeat the boom-and-bust cycle in 2014/15.  In a certain way, it could look alarmingly familiar with increasing market turnover, rising margin financing, and oversubscribed mutual funds.  However, most of these indicators are actually still far below the 2015 levels.  The daily trading value of Shanghai and Shenzhen exchanges has reached RMB 1.68 trillion in the past couple of weeks, doubling the usual amount seen in 2020, but it still trails the recorded level of RMB 2.36 trillion in mid-2015.  Besides, the outstanding margin trading balance is RMB 1.39 trillion, up by 36.2% since the beginning of the year.  This figure is just 61.1% of the peak recorded in 2015 though. 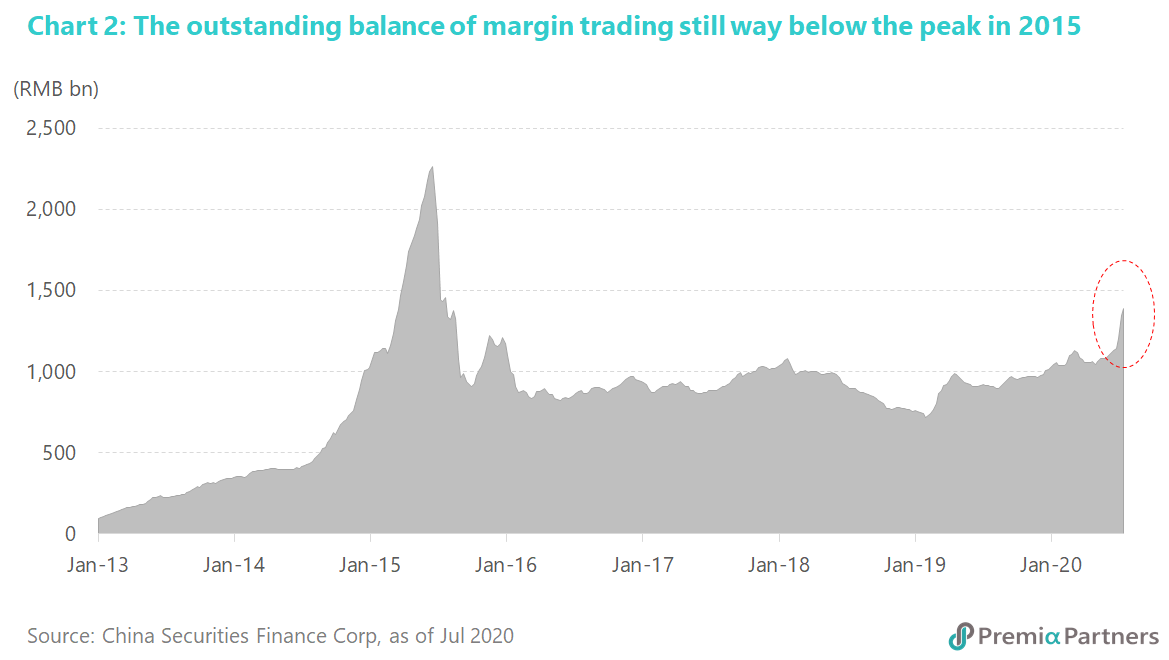 Fundamentally, China has done well in containing the virus spreads with the number of confirmed cases standing at ~85,000 in total and the social distancing, contact tracing and mass testing measures have also much better prepared the economy for orderly reopening.  Even the second wave of a small-scale outbreak in Beijing got under control quickly a few weeks ago.  Since reopening the economy in late March, China macro data has begun to reflect the solid recovery including PMI staying above 50, trade growth getting back to positive, and industrial output growth increasing to mid-single digit.  China GDP expanded 3.2% in the second quarter this year, reversing a 6.8% decline in the first quarter and beating the median forecast of 2.4%.  It is expected to be the only major economy that manage to grow in 2020 whilst the rest of the world is yet to see the green shoots. In fact, while the IMF was forecasting last month that the full year GDP growth for China would be 1% (the only positive number among major economies), many analysts including Goldman Sachs and JP Morgan reacting to the Q2 and H1 growth numbers and big data on industrial production and economic activities, have already revised the full year GDP growth estimates from 2% to 2.5-3%. 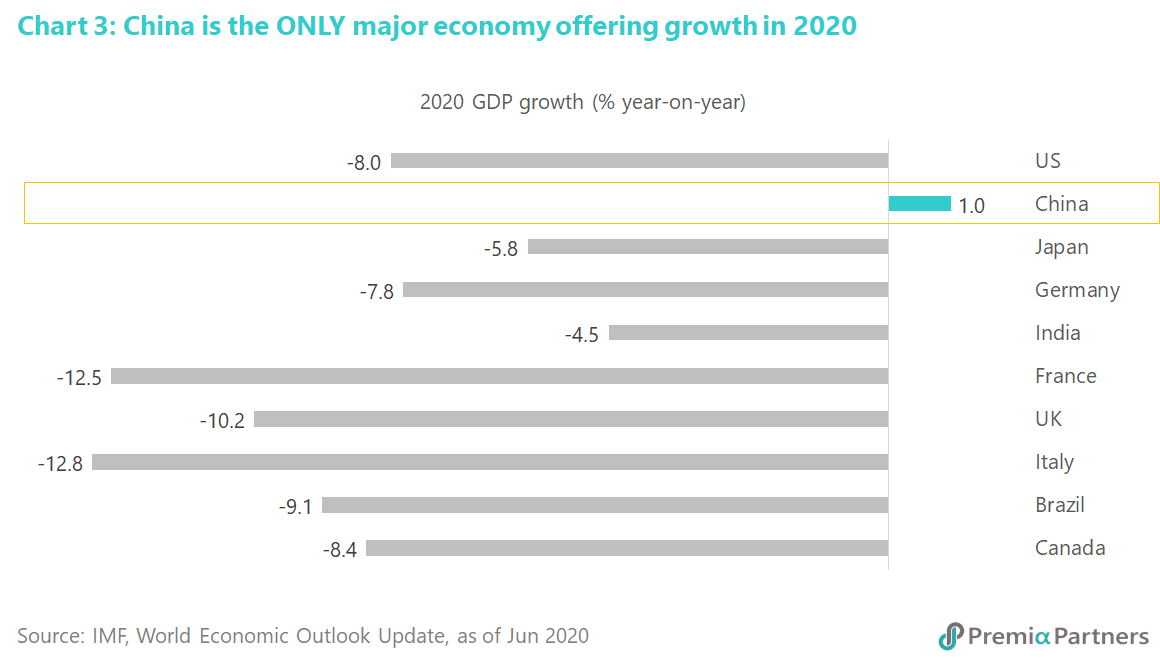 If investors are looking for a reference from the history to predict where we are going, why shouldn’t we compare the current environment to the beginning of QE cycles?  Some of you should recall that even the most seasoned professional managers and analysts did not believe in the bull market back then.  They had nicely pointed out that the easy money flooded by central banks was not able to help the economy come out from the global financial crisis and boldly forecasted that any rally might only prove to be short-lived.  Well, we all know what happened since then – the longest bull market carried on for a decade.

Sometimes people try simplifying things to confirm their own bias, but we should all know that history does not repeat itself.  It often rhymes though.  It, therefore, is important to examine the elements involved and check if they support the argument of a deja vu of the 2014/15 cycle in China market.

Indeed, the government is taking a quite different stance this time.  First and foremost, the authority learnt the hard lessons by not making the same policy mistakes such as limiting short-selling activities, freezing IPO market, allowing voluntarily trading suspension, or introducing a circuit break mechanism.  Besides, the People’s Bank of China is signaling a slower pace of easing to cool down the overheated market sentiment.  China’s central bank has injected a net RMB 29 billion of funds via its main liquidity tools in the last quarter, a significant drop from the RMB 1.4 trillion offered during the first three months as the economy was in free fall.  Recently China Securities Regulatory Commission also exposed 258 funding platforms that illegally lend money to investors for buying stocks, reducing the potential market bubble inflated by the securities margin lending.  Both Social Security Fund and National IC Industry Investment Fund even announced plans to offload shares to slow down the bull run explicitly. 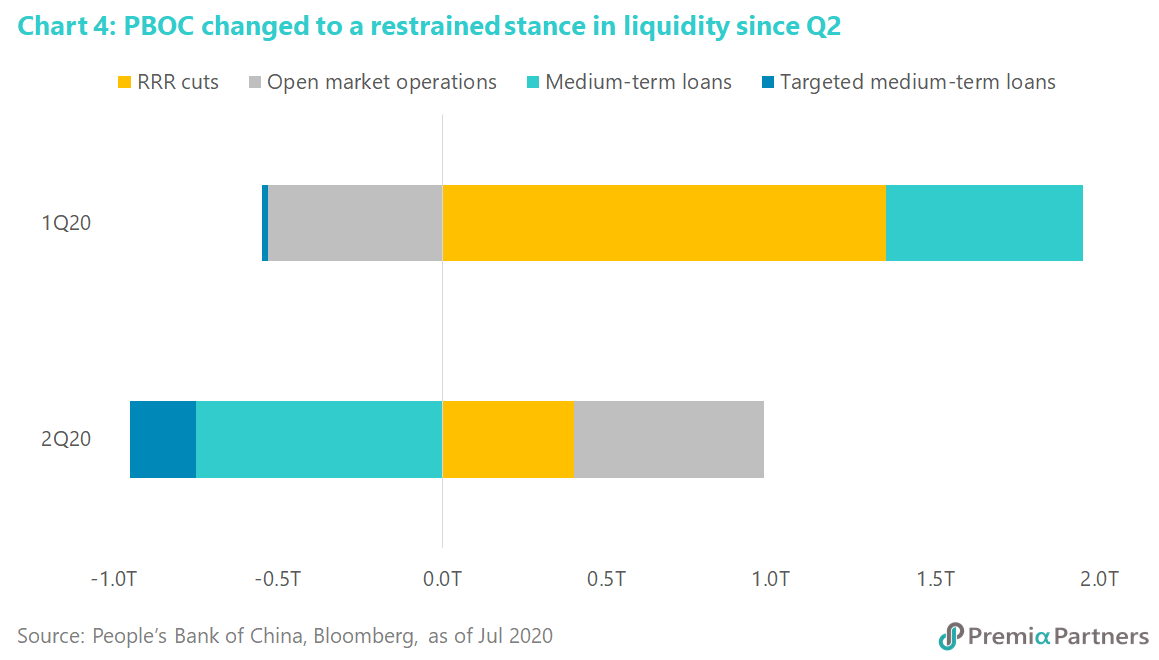 Combined the solid fundamentals with an appealing valuation, China A-share looks like an exposure that investors should accumulate whenever there is a market dip.  If so, the more imminent and value-added question for the investors will be what to own in the onshore market.   Without having the right exposure, the performance could still be very disappointing as we have observed growth and recovery have been quite asymmetrical as a result of COVID, as well as long term structural reforms and according to changes for the economy.  For example, the mega caps represented by FTSE China A50 Index only recorded a gain of 7.5% year-to-date whilst China New Economy Index* was up by 33.7% during the same period.  The performance gap is about 26.3% points in less than seven months.  In fact, the widening gap between the new economy versus the old is not just individual to China. The US market also reflected a similar pattern with Nasdaq outperforming S&P 500 by 21.7% points year-to-date.  The COVID-19 did contribute to the strong performance of the new economy stocks in the business of e-commerce, gaming, cloud, AI, big data, 5G network, industrial automation, EV and biotech, etc.   The companies engaging in the innovative industries or perhaps rather with innovative mindset and agility to adapt to the new normal still manage to grow their business in the current challenging environment whilst the companies operating in traditional ways see substantial deterioration in earnings. If market evolution and survival of the fittest are inevitable, COVID and policy tailwinds just turbo-charged the trajectory propelling the winners ahead earlier, and the demise of the ones that fail to reinvent themselves for the same new normal earlier also (except for the zombie companies that are surviving but not thriving). 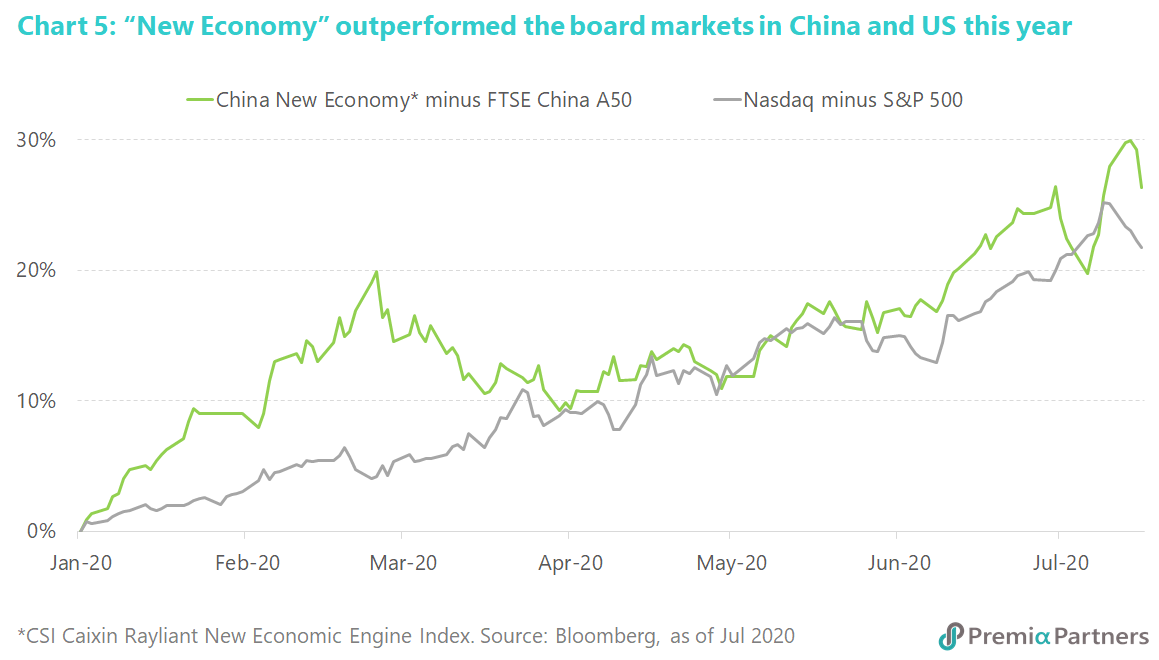 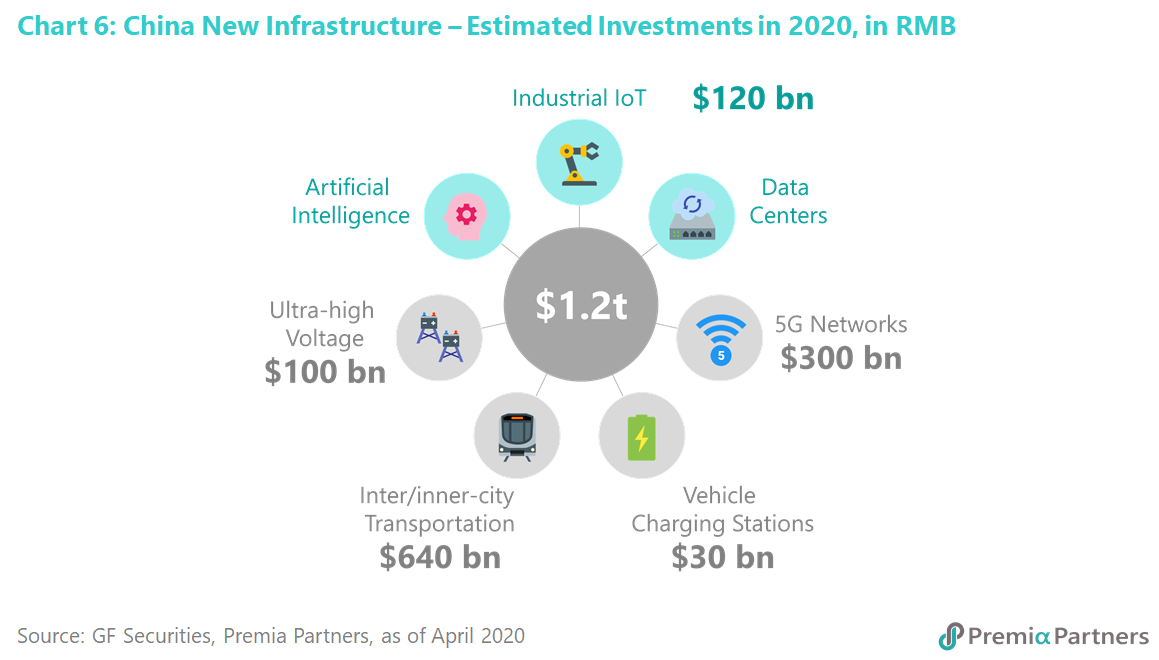 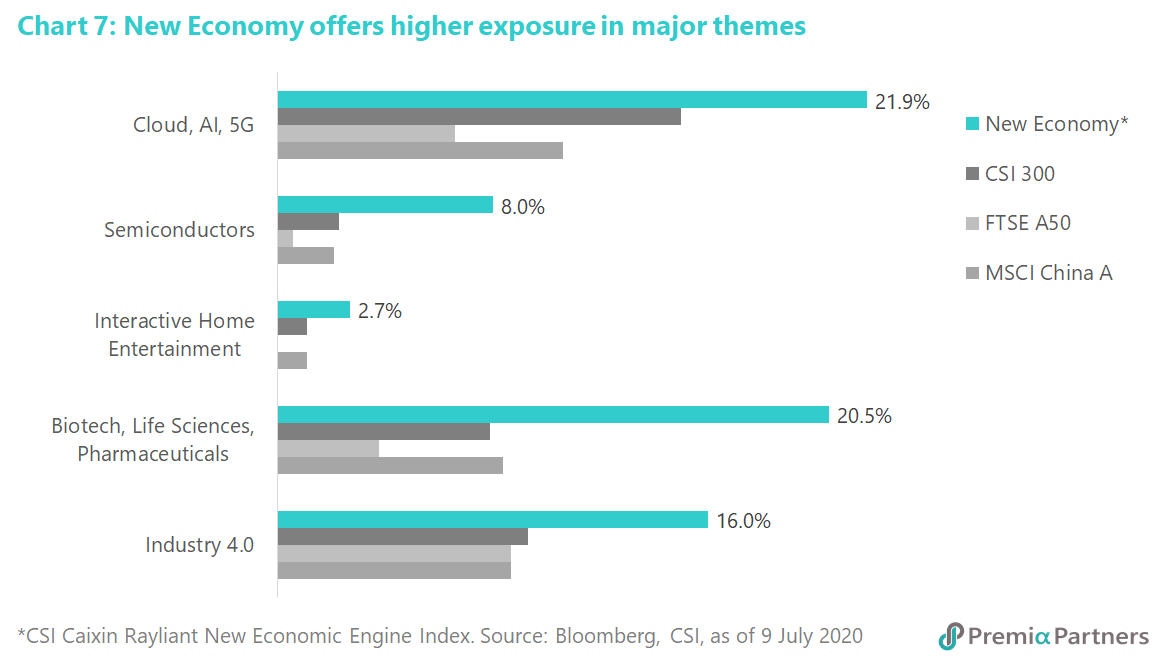 It is obvious that the US China tension and COVID in many ways have fast tracked the structural transformation of the Chinese economy, with areas especially related national security and strategic goals receiving earlier and bigger support from both the public side in terms of policy support and stimulus package, as well as private sector funding from both retail and institutional investors positioning for such strategic tailwinds. In the last few months we have also observed increasing public market participation by typical private market participants as private equity, venture capital and asset owners with staying power and mandate flexibility move across the capital structure and take direct public equity positions from time to time for relative value and strategic access plays. This goes for both new economy sector leaders, as well as traditional incumbents that are reinventing themselves to adapt to the new normal and have become increasingly innovation and technology-enabled throughout their value chain – such as Gree, Midea and Jiangsu Hengrui.

That said, alpha does not just come from sector allocation, especially as we have observed COVID presented significant liquidity and debt coverage challenges for many players. By adopting a multi-factor approach in constructing the portfolio, Premia China ETFs select stocks with high quality fundamentals in their financials covering both balance sheets and P&L accounts.  For investors looking to capture the future growth opportunities and would prefer an exposure benefits from the structural change, Premia CSI Caixin China New Economy ETF (3173.HK) can be an appropriate tool.  Rather than just IT (which is also more susceptible to the US China tension), it covers a more diversified set of major trends including technology advancement, urbanization, rising middle class, consumer upgrade, education, aging population and healthcare.  Besides, it emphasizes light-asset model, profitability and R&D investment in screening and weighting the stocks – so rather than simply chasing tech stocks through rallies, this is a basket of new economy players with more robust fundamentals and quality growth DNA to weather market cycles.

On the other hand, for investors looking to keep to more established incumbents that are driving the stock of current GDP of China with less deviation from mainstream benchmarks, higher dividend yield and more attractive valuation, Premia CSI Caixin China Bedrock Economy ETF (2803.HK) with a forward PE of 8.1, dividend yield of 3.7% and a tracking error of 5.7% vs CSI300 can be considered.  It tried to capture high quality contributors to China’s real economy with value and low volatility in the stock selection process.  Comparing with the simple beta exposure that other mainstream ETFs offer, both Premia ETFs would be good allocation tool to ride through the cycle. 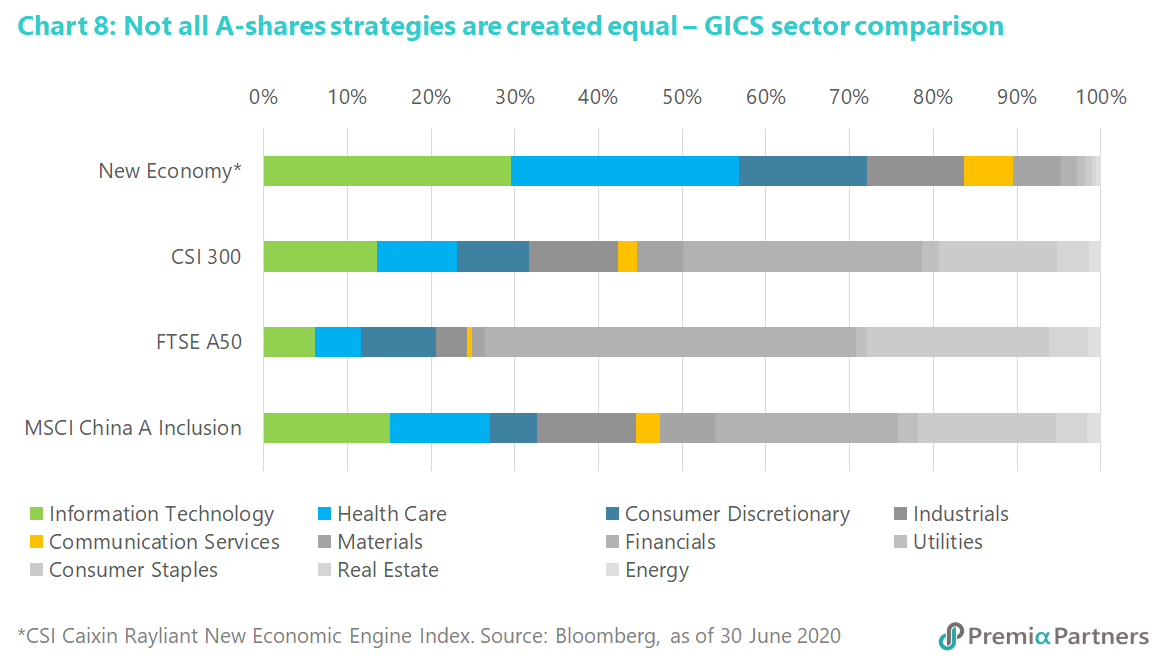